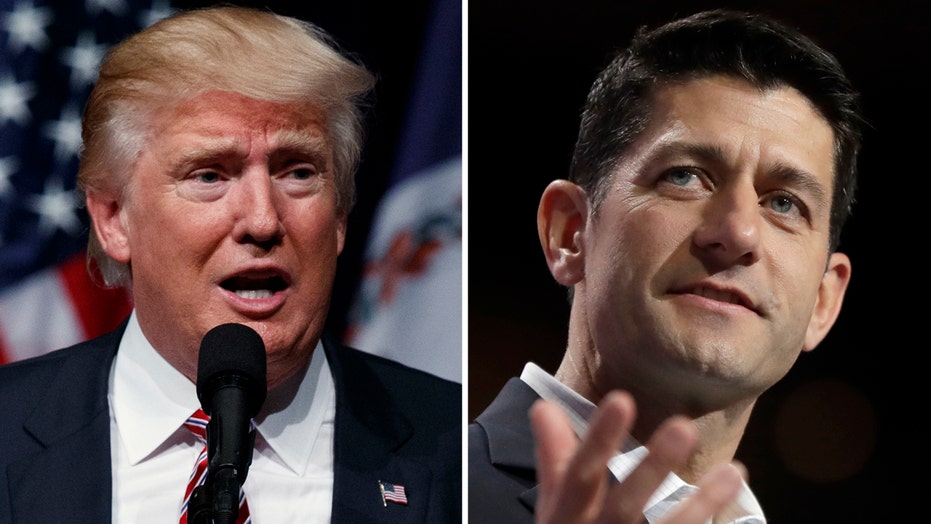 On 'America's Newsroom,' campaign chief Paul Manafort insists the Republican Party is 'united' despite some disagreements

House Speaker Paul Ryan, R-Wis., took a shot at Republican nominee Donald Trump Thursday, saying the billionaire “had a pretty strange run since the convention” and that he finds it “distressing” that he is not focusing on Hillary Clinton.

Ryan faces businessman Paul Nehlen in next Tuesday's primary election, and his remarks came after Trump declined to endorse the 2012 GOP vice presidential nominee in an interview with The Washington Post Tuesday.

Trump’s repetition of the phrase “not quite there yet,” which he used four times in the interview, echoed Ryan’s own hesitancy to back Trump. When asked if he would endorse the billionaire, Ryan told CNN in May: "I'm just not ready to do that at this point. I'm not there right now.”

In his interview Thursday, Ryan added that while he supports Trump, it doesn’t mean he would refrain from criticizing any missteps the candidate makes, citing his commitment to defending the party and its principles.

"We are a party where the grassroots Republican primary voter selects our nominee and that's as it should be. I think there's something to be said about respecting those voters," Ryan said.

"But if I see and hear things that I think are wrong, I'm not going to sit by and say nothing because I think I have a duty as a Republican leader to defend Republican principles and our party's brand."

Trump appeared to reach out to Ryan Thursday in a town hall meeting in Portland, Maine where he called Ryan “a good guy” and said he had encouraged vice presidential nominee Mike Pence to endorse his congressional bid. Pence endorsed Ryan Wednesday.