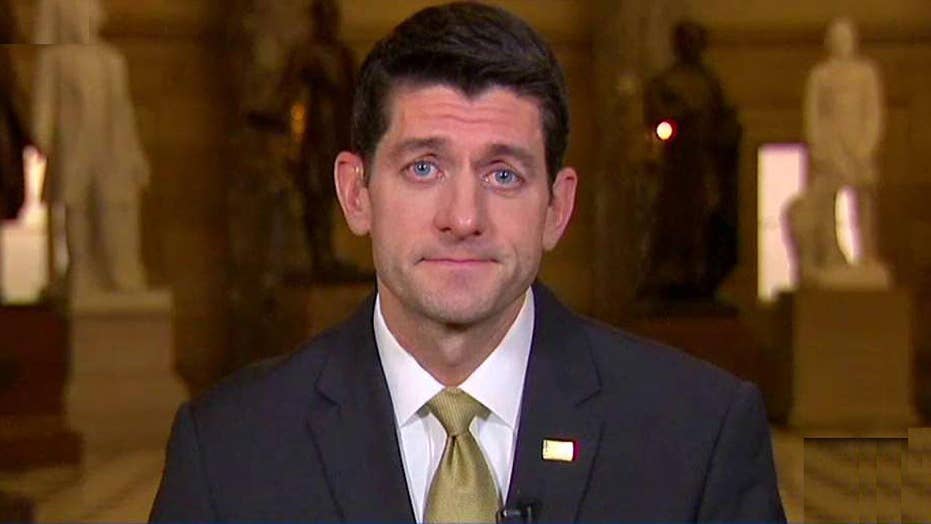 Paul Ryan: We must 'unite the clans' in the GOP

House Speaker goes 'On the Record' on his call for Republican unity in his speech at Heritage Action Conservative Policy Summit, his meeting with Pres. Obama and the latest in 2016 presidential race

Rank-and-file House Republicans found consensus during a Friday meeting about passing a budget. They all agreed that House Speaker Paul Ryan, R-Wis., delivered a great presentation.

So everything on the budget is settled, right?

Sure. Republicans are struggling to forge an agreement between fractured wings of their party to set a fiscal blueprint this year. It was to be a new day under the guidance of Ryan – a former chairman of the House Budget Committee and author of several “Ryan Budgets.”

Republicans would stick to the exalted “regular order.” They would adopt a budget that establishes the overall spending figure for fiscal 2017 and then advance through the 12 annual appropriations bills that fund the government.

An informal poll of almost all of lawmakers who attended the Friday confab asserted that Ryan’s presentation went well. And yet there was little agreement on how to move ahead.

If only somehow lawmakers could convert Ryan’s five-star presentations into legislative text. Then they could adopt a budget.

Something must get lost in translation between the presentation and charts and congressional legislative counsel that writes the text of bills and resolutions.

The problem appears to be that before House Speaker John Boehner left Congress last autumn, the Ohio Republican declared he would “clean the barn” for his successor.

Boehner and Obama agreed to a package that prevented a government shutdown, suspended the debt ceiling and set benchmarks for federal spending for the next two years.

Congress had $1.067 trillion available last year for “discretionary” spending and $1.070 trillion for fiscal 2017.

But conservatives balked at the spending figure.

Many don’t feel bound by an agreement arranged by the former speaker and a president whom they abhor – even though both houses of Congress approved the pact.

Moreover, defense hawks are concerned about cutting too much at the Pentagon. Attrition from both ends of the GOP spectrum could leave the House short of the votes to adopt a budget and then start work on appropriations measures.

A failure to accomplish either would represent a diversion from “regular order” -- the clarion call from Republicans and the touchstone of their derision for Boehner.

On Friday, Ryan presented Republicans three options. First, stick with the Obama-Boehner deal and move through the spending bills. Ryan noted that the second and third options -- either slashing money from the Obama-Boehner agreement or dumping in extra money for the military -- prompts problems.

Ryan earned a promise from Senate Minority Leader Harry Reid, D-Nevada, a few months ago. He agreed to not block appropriations bills from debate. But any change in the Obama-Boehner spending framework could torch that arrangement.

“I think (the House leadership) knows what that would do over here,” one senior Senate Democratic source told Fox.

Ryan told his members that stalling the appropriations process means the House is headed directly to where it went the past few years with Boehner at the helm: broad, interim spending bills to avoid a government shutdown and/or an “omnibus” spending package to punt all decisions on spending until October 1, 2017.

Thus, Congress could abdicate its most-powerful responsibility: the ability to affect policy through controlling purse strings.

“The problem is that we deviate from that (Obama-Boehner) number, it’s doubtful that the Senate won’t agree. And that probably means we get an omnibus,” predicted House Appropriations Committee Chairman Hal Rogers, R-Ky.

He says he’s working off the $1.070 trillion figure agreed upon by the president and former speaker.

“That’s what I’ll use until I’m told otherwise,” Rogers said. “I’m anxious to get going.”

He’s simply making a “presentation” to lawmakers about their choices – and the consequences of those decisions. This is what parents sometimes do with kids. Get your homework done early and you can stay up late and watch TV. Screw around all day Saturday and you’re going to cram Sunday night to finish your science project due Monday morning.

A source familiar with Ryan’s presentation indicated that the Wisconsin Republican told lawmakers that believe it or not, the GOP might not have to do a budget.

“It would be a shame, but the sky won’t fall,” Ryan told lawmakers behind closed doors.

What? After years of excoriating Senate Democrats for not completing a budget? And here is “Mr. Budget Guy” who rises to speaker, then defers on doing the budget if the House can’t find accord?

Those are just the political realities Ryan faces. He insists he won’t foist a decision down the throats of reluctant members.

“I do see leadership attempting to find a path,” said Rep. Raul Labrador, an Idaho Republican and one of the leaders of the ultra-conservative Freedom Caucus, after Ryan’s presentation. But he wants to scrap the Boehner/Obama spending number.

“We’re all against it,” said Labrador of his Freedom Caucus colleagues.

Rep. Cynthia Lummis, R-Wyoming,  is a Freedom Caucus member who told Fox News that she was “trying to get to yes” on the budget.

At Friday’s meeting, Lummis handed out a paper outlining a series of proposals to save more than $30 billion in spending.

Among her ideas: a cap on federal funding for Medicaid, raising the qualifying threshold for those for food stamp eligibility, the revocation of a rebate for drug manufacturers who make medicine under Medicare Part D and a plan to bar the federal government from hiring more than one worker for every three retirees.

“This is mini-sequestration for mandatory programs,” Lummis boasted.

“Mandatory” programs are the spending which Congress long ago set on auto-pilot. They include entitlements like Medicare, Medicaid and Social Security.

In 2011, Congress imposed “sequestration” or substantial cuts on “discretionary” spending. That’s where Congress “elects” to spend money. But Congress has never deeply chopped into the “mandatory” side of the ledger even though cuts there would make the biggest difference.

Still, lawmakers are loathe to slash popular entitlement programs. Political pressures helped designate entitlements as the “third rail of politics.” In other words, like a subway line, touch the third rail and you get electrocuted.

But Rep. Rob Woodall, a Georgia Republican and member of the Budget panel, says lawmakers could pursue third-rail politics more often if they really wanted to put a dent in spending. Woodall noted the Ryan budgets included a variety of entitlement changes over the years.

“If you can move the mystical savings from years eight, nine, ten to now then yes (the Freedom Caucus would vote for it),” Mulvaney said.

There’s concern the House may simply violate regular order and simply “say” a budget is approved to get on with the appropriations process.

Mulvaney had a proposal to avoid that onerous scenario.

Rep. Tom Cole, R-Okla., finds himself in a unique vantage point on the budget and appropriations fight. He’s a senior member of both the Budget and Appropriations committees.

“I don’t think overthrowing the overall number is very helpful,” he said. “A deal is a deal.”

But then Cole uttered perhaps the most-prescient thing yet amid the budget imbroglio.

“We’re arguing over something that doesn’t really matter,” he said.

Congressional observers could interpret Cole’s remark a number of ways. First of all, the tussle is over a pretty small piece of spending.

And if the GOP blows up the process at the beginning (doing their homework early) they don’t get to make policy decisions later via appropriations bills (staying up late and watching TV). Secondly, budgets aren’t binding.

They aren’t signed into law. If the Republican brain trust wants to just start the spending bills and are at an impasse over the budget, they could simply “deem” that they have approved a budget and begin. But here’s the real problem.

Even if the House adopts a budget and begins the appropriations process, it’s a challenge that the lawmakers will get all 12 of those measures debated and approved.

That’s to say nothing of aligning with the Senate and getting bills that  Obama can sign into law. Otherwise, the budget and appropriations exercise won’t be that much different than those in past years. The end result is that lawmakers and the President must agree on a major, catch-all spending bill – right before the presidential election.

“Is there a way we (Congressional Republicans) can avoid being the story this fall?” asked one exasperated GOP lawmaker.

But Cole noted that Ryan was already backing down in the Friday conclave.

“I think he is lowering expectations for all concerns,” Cole said.

Great expectations. The House may yet pass a budget and roll through the annual spending bills. But they may not. House members certainly harbored great expectations to get major things done. But if the political and legislative will isn’t there, they won’t accomplish much. And Ryan won’t insert himself into this jousting.

But unlike when Boehner ran the show, House Republicans found common ground on one thing: The speaker sure delivers a great presentation.