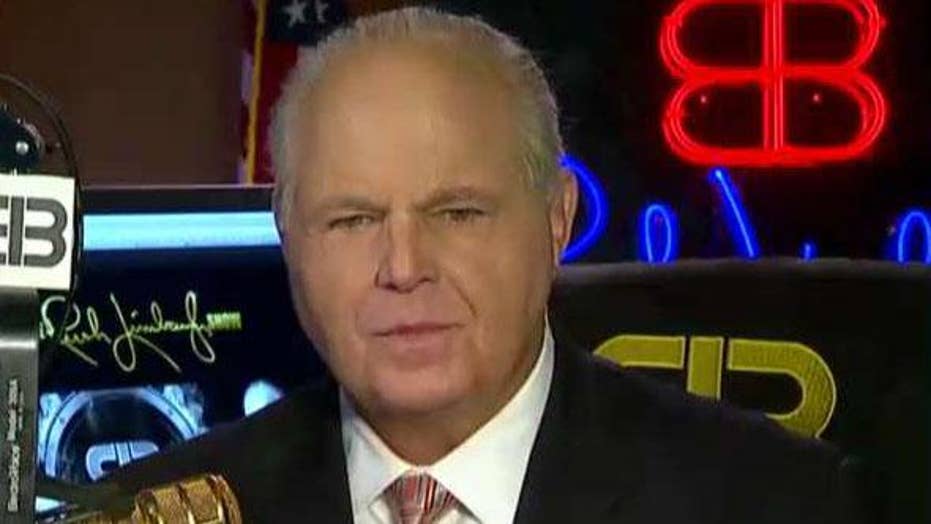 President Trump declares a national emergency on the southern border in a bid to divert billions toward border security; reaction from talk titan Rush Limbaugh.

Conservative talk radio host Rush Limbaugh, speaking to "Fox News Sunday," charged that the compromise spending bill recently signed by President Trump to avert another partial government shutdown was little more than a disguised effort by some Republicans to torpedo his 2020 presidential candidacy.

"Both parties have people that are still trying to get rid of Donald Trump," Limbaugh said, asserting that Democrats are also working to guarantee a "permanent underclass of voters" who are "uneducated" and "don't even speak" English.

He continued: "I read this bill -- this spending bill, this bill is outrageous. [It includes] welcoming centers for newly arriving illegal aliens, and all kinds of medical care" -- a reference to the allocation of $192,700,000 in the bill's conference agreement to enhance medical care and transportation for illegal immigrants in U.S. custody, including to shelters run by nonprofits.

"The purpose of this bill, I think, was eventually to be used by the Democrats and some Republicans to tell the American people, 'See, electing President Trump was pointless, worthless, he can't protect you, he can't stop us, he can't do what he said he was going to do, because we hate him so much we're not going to allow him to do it -- that's what this bill is," Limbaugh said.

The talk show host rejected claims that Trump is unduly influenced by right-wing media figures and "wackos" -- an accusation that resurfaced amid the ongoing border wall funding dispute.

FILE - In this March 5, 2018, file photo, construction continues on a new, taller version of the border structure in Calexico, Calif. A federal appeals court has rejected arguments by the state of California and environmental groups who tried to block reconstruction of sections of the U.S.-Mexico border wall. The 9th U.S. Circuit Court of Appeals ruled Monday, Feb. 11, 2019, that the Trump administration did not exceed its authority by waiving environmental regulations to rebuild sections of wall near San Diego and Calexico. (AP Photo/Gregory Bull, file)

Late last year, a slew of prominent conservatives, including columnist Ann Coulter, excoriated Trump for appearing to back down on his threat not to sign any spending bill without wall funding. Trump responded by unfollowing Coulter on Twitter, then reversing course and insisting on money for the barrier project on the way to a historic 35-day partial government shutdown.

"It's just another effort to continue to try to diminish the president -- diminish President Trump as someone who doesn't know what he's doing, can't do it without guidance from the wacko right," Limbaugh told host Chris Wallace. "It's not at all the way he's governing, and there isn't anybody doing what I do that has a thing to do with actually making policy for this president."

On Friday, Trump said he is declaring a national emergency on the southern border, tapping into executive powers in a bid to divert billions toward construction of a wall even as he signed a funding package to avert another shutdown that includes just $1.4 billion for border security -- far short of the $5.7 billion he has long requested for the wall.

The compromise legislation, which overwhelmingly passed in the House and Senate last week, contained enough funding for building just 55 miles of barricades, not the 200-plus miles the White House has sought.

Mexican Federal Police in riot gear guard outside of a migrant shelter for Central American immigrants in Piedras Negras, Mexico, Tuesday, Feb. 5, 2019. A caravan of about 1,600 Central American migrants camped Tuesday in the Mexican border city of Piedras Negras, just west of Eagle Pass, Texas. The governor of the northern state of Coahuila described the migrants as "asylum seekers," suggesting all had express intentions of surrendering to U.S. authorities. (Jerry Lara/The San Antonio Express-News via AP)

The bill provided additional funding for 5,000 more beds that Immigration and Customs Enforcement (ICE) can use to house illegal immigrants. But in an attempt to pressure the agency to detain fewer illegal immigrants, Democrats ensured that the bill did not include funding for the 2,000 additional ICE agents requested by the Trump administration, or the 750 Border Patrol agents that were also sought.

Several Republicans, including Texas Reps. Dan Crenshaw and Chip Roy, voted against the bill, saying it didn't properly address the flow of illegal immigrants and drugs across the border. Roy called the bill a "sham," and said the funding bill "undermines the whole point of an emergency declaration."

"We have an emergency -- this is an invasion."

For his part, Limbaugh said not enough attention is being given to Democrats' resistance to even minimal border security measures. In an interview last week, potential Democratic presidential candidate Beto O'Rourke called for existing border walls to be torn down.  Democratic presidential contender Sen. Kirsten Gillibrand said she "could support" that position as well.

Central American immigrants line up to register with Mexican Immigration officials at a shelter in Piedras Negras, Mexico, Tuesday, Feb. 5, 2019. A caravan of about 1,600 Central American migrants camped Tuesday in the Mexican border city of Piedras Negras, just west of Eagle Pass, Texas. The governor of the northern state of Coahuila described the migrants as "asylum seekers," suggesting all had express intentions of surrendering to U.S. authorities. (Jerry Lara/The San Antonio Express-News via AP)

"We have an emergency -- this is an invasion," Limbaugh said, referring to the flow of thousands of illegal immigrants -- including many in organized caravans -- that continue to approach the U.S. border.

Pressed by Wallace on his pervious criticisms of sweeping executive actions by former President Obama, Limbaugh said, "What Obama was doing was furthering this existing problem. ... Yes, I objected to that, but primarily because of what he was doing with these executive powers."

Central American immigrant families look out through the fence of a shelter in Piedras Negras, Mexico, Tuesday, Feb. 5, 2019. A caravan of about 1,600 Central American migrants camped Tuesday in the Mexican border city of Piedras Negras, just west of Eagle Pass, Texas. The governor of the northern state of Coahuila described the migrants as "asylum seekers," suggesting all had express intentions of surrendering to U.S. authorities. (Jerry Lara/The San Antonio Express-News via AP)

Recently unearthed efforts by the FBI and Justice Department to begin discussions about ousting Trump in 2017, Limbaugh continued, only serve to underscore his point further. Fox News first reported on Sunday that top FBI lawyer James Baker, in closed-door testimony to Congress, detailed alleged discussions among senior officials at the Justice Department about invoking the 25th Amendment to remove Trump from office, claiming he was told Deputy Attorney General Rod Rosenstein said two Trump Cabinet officials were “ready to support” such an effort. 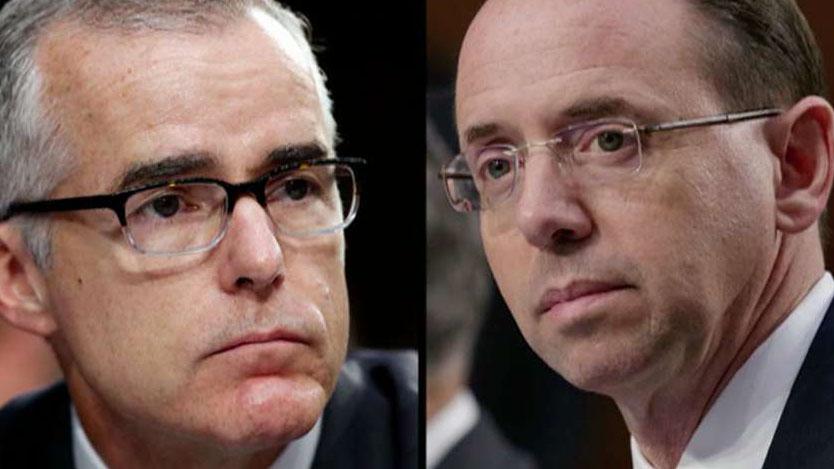 "People, simply because they don't like a guy's hairstyle or like where he came from, decided the American people's decision was invalid and began a systematic process to get him out of office -- this is a silent coup," Limbaugh said. "These guys, if you ask me, ought to be the ones in jail."

Asked who the likely 2020 Democratic presidential nominee will be, Limbaugh sided with former Vice President Joe Biden. Although Biden has not formally announced a bid, a source with direct knowledge told Fox News on Thursday that he is virtually certain to run.

"The frontrunner would probably be right now Joe Biden, 77 years old, plagiarist, nicknamed 'plugs' -- I think he's the guy they are probably thinking is the leader in the polls right now," Limbaugh said. "But it's going to be very crowded. They're going to be knocking each other off. That's going to be fun to watch. Incumbancy carries with it a lot of power. ... They're getting way ahead of the game, and I don't think it's going to be as easy as they think."