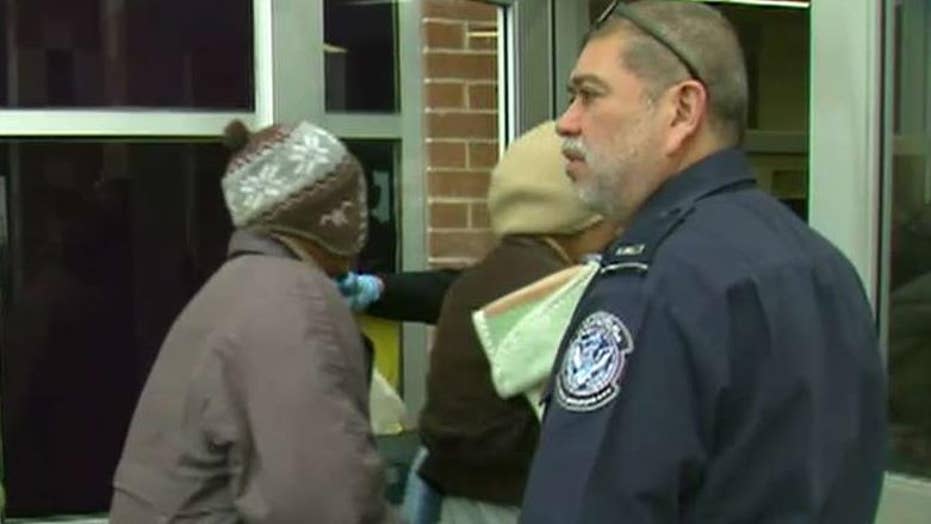 EAGLE PASS, Texas – Even before the migrant caravan arrived last week, this area, like many along the southern border, was busy.

But then 1,800 people arrived, mostly Honduran, across the river in Piedras Negras, Mexico and a normally hectic day became impossible to manage.

Fox News recently visited this part of the border. Reporters saw when the first small group of about a dozen people from the caravan were allowed to present themselves at the U.S. border, about a week after they had arrived.

Dozens of people from the prior week were already in line ahead of the caravan migrants – highlighting how busy border patrol officials were before the caravan arrived. Most in the caravan are hoping to seek asylum in the United States. 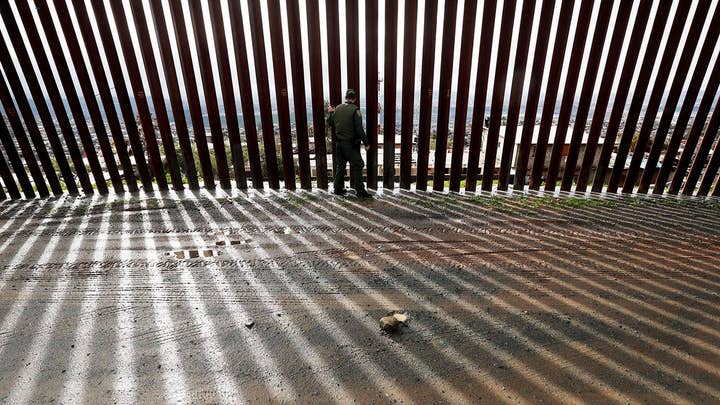 Mexican officials had offered caravan members a ride for the last leg of the trip – from Saltillo in the state of Coahuila, Mexico to the border. About 50 buses transported people to the city of Piedras Negras, which is just across from Eagle Pass, Texas.

Once in Piedras Negras, Mexican officials brought the caravan members to an unused factory that was converted into a makeshift shelter. It is surrounded by members of the Mexican police who are not allowing anyone to leave unless they have the proper papers and can receive a Mexican visa that allows them to live and work in Mexico for up to a year.

Immigrants are put on a list and when their number is called, they are sent to the U.S. border, which is located at a bridge just a few miles away. At this crossing, officers say they can process, at most, about 20 people a day.

The show of force is evident on both the American and Mexican side of the border. (Fox News)

In that first group we saw, there were about 12 people, made up of three or four families. Once across the bridge, they lined up outside the door to the port facility. Just inside the door, they entered a small room where they were initially processed. Officers took their names and biometric information. They were also given food. Paul Del Rincon, the port director at the Eagle Pass Port of Entry, opened up a fridge to show us meals of burritos, and chicken nuggets for children.

The immigrants could be here for a while.

After the initial processing room, people were led to a larger area, which until recently was a conference room. Chairs had been set out and people waited to have what’s called a credible fear interview. U.S. Customs and Border Protection officers don’t decide who gets asylum but say they do document an immigrant’s claims and start the process to contact Immigration and Customs Enforcement, which takes it from there.

MEXICO GOVERNOR TELLS MIGRANTS TO STAY AWAY FROM HIS BORDER CITY ‘NO MORE CARAVANS!’

Each interview typically lasts two to three hours. Beyond the conference room, there’s another area. It has gym mats on the floor where people can try to catch some sleep. There are a few scattered toys for children to play with. Children are also taken to a local emergency room so that they can be checked out before going further in the process. Sometimes waiting at those emergency rooms can take hours. Rincon said the immigrants are often with his officers for a total of one to even three days.

Very first migrants from the caravan arrive at the U.S. side to begin processing. (Fox News)

“These ports of entry were never designed for people to be here long,” said Rincon.

Eagle Pass is busy. Since NAFTA, factories have sprung up on the other side of the U.S. border. What they make needs to be transported into the US. Goods and materials from the U.S. go over the border to Mexico.

Rincon has a Sisyphean task – 1,800 immigrants want to claim asylum. At 20 a day, it will take weeks to work through the caravan. That’s as other individuals and groups, people not associated with the caravan, make their own way to the border wanting to seek asylum.

Looking down at Eagle Pass Texas where US law enforcement has lined the riverbank. (Fox News)

“The status quo is not sustainable,” he said.

As the situation in their home countries continues to devolve, it’s unlikely immigrants will stop making the long journey to border towns like this one.

“At this point, the system is at a total capacity at all points in the process,” Rincon said. “The situation demands action at a variety of fronts.”

Whether any action will happen, of course, is completely out of his hands.