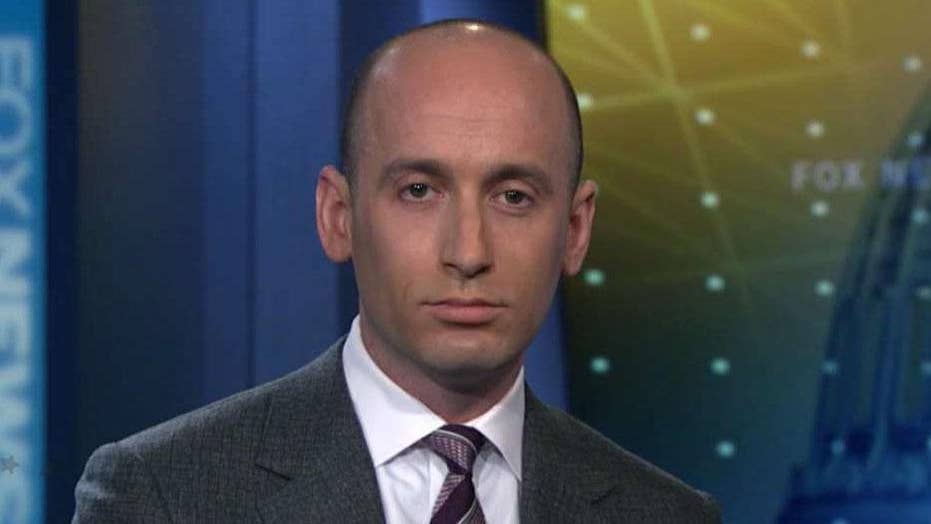 Trump's critics announce plans to challenge the president's bid to secure funds for his border wall.

Miller also strongly suggested that Trump would veto any effort by Congress to override his national declaration of emergency. A senior administration official told Fox News that the White House plans to move $8 billion in currently appropriated or available funds toward construction of the wall. Of that, $3 billion could be diverted with help from the emergency declaration.

"You’re going to see probably a couple hundred miles [of wall] in time, I would say, by the end of the next appropriation cycle," Miller said. "All together in terms of what we already have underway, what’s underway right now, and then what we’re going to complete."

Miller, asked by anchor Chris Wallace why a wall is necessary if most drugs are caught at ports of entry, said the government statistics on the matter are misleading and easily misinterpreted.

"The problem with the statement that you're 'apprehending 80 or 90 percent of drugs at ports of entry' -- that's like saying you apprehend most contraband at TSA checkpoints at airports," Miller said. "You apprehend the contraband there because that's where you have the people, the screeners. I assure you if we had screeners of that same density across every single inch and mile of the southern border, you'd have more drugs interdicted in those areas."

LIMBAUGH: GOP TRYING TO SABOTAGE TRUMP -- WHY DOES BILL HAVE MONEY FOR ILLEGAL IMMIGRANT 'WELCOME CENTERS?'

Gillibrand on tearing down existing border walls: 'If it makes sense, I could support it'

Democrats are planning to introduce a resolution disapproving of the emergency declaration under the National Emergencies Act once Congress returns to session, and it is likely to pass Congress. Several Republican senators are already indicating they would vote against Trump — though it doesn't appear that there are enough votes to override a veto by the president.

A two-thirds vote by both the House of Representatives and the GOP-controlled Senate would be necessary to defeat Trump's veto of such a resolution. Trump ally Rep. Jim Jordan, R-Ohio, told ABC News that he believes there are enough GOP votes to prevent the supermajorities required to overcome a veto.

"I think there are plenty of votes in the House to make sure that there's no override of the president's veto," he said. "So it's going to be settled in court, we'll have to wait and see."

The very fact that the National Emergencies Act contemplates such a protocol, Miller said, suggests that parallel court challenges to Trump's authority would be unsuccessful.

Speaking at the White House on Friday, Trump predicted legal challenges would follow a tried-and-true path.

President Donald Trump speaks during an event in the Rose Garden at the White House in Washington, Friday, Feb. 15, 2019, to declare a national emergency in order to build a wall along the southern border. (AP Photo/Susan Walsh)

"The bottom line is this: You cannot conceive of a nation without a strong, secure border," Miller added. "It is fundamental and essential to the idea of sovereignty and national survival to have control over who enters and doesn’t enter the country."

"Obviously, the president is going to protect his national emergency declaration"

Pressed by Wallace to name another case in which a president has declared a national emergency because he couldn't obtain money from Congress, Miller countered that Congress has indirectly appropriated the funds for the wall by providing for general military and defense spending -- and explicitly gave the president the power to declare emergencies.

There are dozens of national emergencies currently in effect, including one dating back to the Jimmy Carter administration, but they largely pertain to foreign sanctions, and do not involve a significant reappropriation of funds.

In this Feb. 13, 2018, photo, House Minority Leader Kevin McCarthy, R-Calif., joins supporters of President Donald Trump and family members of Americans killed by undocumented immigrants as they gather to to promote their support for a border wall with Mexico, at the Capitol in Washington. When you want results in a polarized Washington, sometimes it pays to simply leave the professionals alone to do their jobs. (AP Photo/J. Scott Applewhite)

Miller added: "They didn’t refuse to appropriate it. They passed a law specifically saying the president could have this authority. It’s in the plain statute. That’s the decision that Congress made, and if people don’t like that they can address it.  But to my – but to my point that I made, this would not be even an issue if the president was invoking that statute to support some foreign adventure overseas.  You and I both know that that presidents for years have engaged in one military adventure after another, not to mention the fact that we do operations to destroy drug fields in foreign lands in Afghanistan or in Colombia. And we can’t even deal with the criminal cartels operating on our border?"

Democrats were focused on playing politics, Miller said, and would hesitate to question the president's authority in other matters involving the military.

"I guarantee you this," Miller said. "If Donald Trump had said he’s invoking the national emergency military construction authority to build a security perimeter in Iraq or Afghanistan or around a military installation in Syria, there would not have been one word of objection from Congress. This is defending our own country.

"We have families and communities that are left unprotected and undefended," he continued. "We have international narco-terrorist organizations. This is a threat in our country, not overseas.  Not in Belarus.  Not in Zimbabwe.  Not in Afghanistan or Syria or Iraq but right here.  And if the president can’t defend this country, then he cannot fulfill this constitutional oath of office."

Separately, Sen. Chris Coons, D-Del., told CBS's "Face the Nation" that he believes Congress needs to act to "defend" its powers of the purse.

"I do think that we should not set the terrible precedent of letting a president declare a national emergency simply as a way of getting around the congressional appropriations process," he said.

The border wall construction is shaping up to be a pivotal issue in the upcoing presidential race. Former Texas Democratic Rep. Beto O'Rourke said Thursday that he would "absolutely" support tearing down existing barriers along the southern border with Mexico, in a full-throated embrace of open-borders rhetoric that has left conservatives wondering where other potential 2020 Democratic White House hopefuls stand on the issue.

"Here's what we know," O'Rourke said. "After the Secure Fence Act [of 2006], we have built 600 miles of wall and fencing on a 2,000-mile border. What that has done is not in any demonstrable way made us safer. It's cost us tens of billions of dollars to build and maintain. And it's pushed migrants and asylum seekers and refugees to the most inhospitable, the most hostile stretches of the U.S.-Mexico border, ensuring their suffering and death."

Senate Minority Leader Chuck Schumer, D-N.Y., and other Democrats, including then-Sens. Barack Obama and Hillary Clinton, supported the Secure Fence Act of 2006, which authorized the construction of some 700 miles of fencing at the border. As of 2015, virtually all of that fencing had been completed, according to government figures.