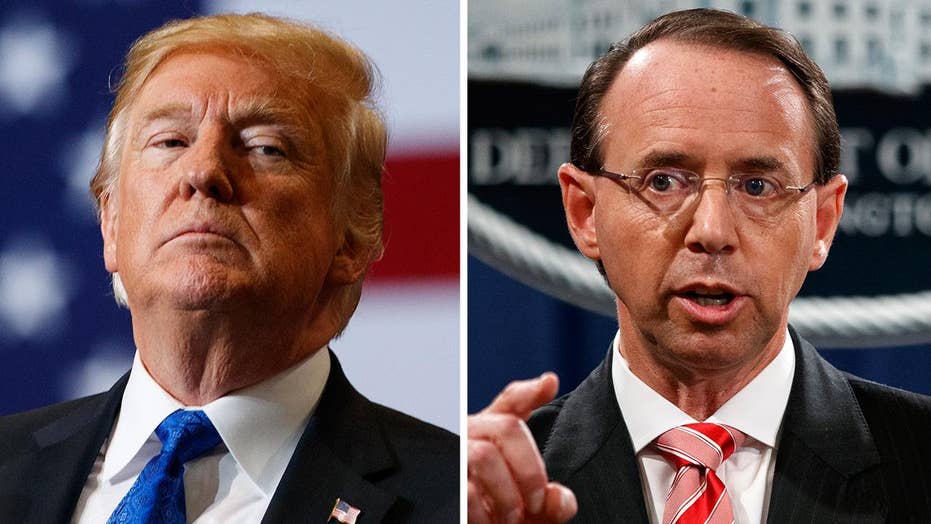 White House: Rosenstein to meet with Trump on Thursday

President Trump is scheduled to meet with Rod Rosenstein on Thursday, the White House said, seeming to tamp down speculation that the deputy attorney general faces the prospect of an immediate firing over a damaging press report.

The No. 2 Justice official, who frequently finds himself in the political crosshairs due to his role overseeing the special counsel's Russia probe and involvement in other controversies, was the subject of numerous conflicting reports late Monday morning.

One initial report indicated the embattled official had already quit, while sources told Fox News and other outlets that he was heading to the White House expecting to be fired -- in the wake of a story claiming he suggested wearing a "wire" against Trump and invoking the 25th Amendment to remove him from office last year.

But the White House put out a brief statement saying Rosenstein and Trump will meet Thursday, apparently to continue discussing that story, when the president returns from New York.

“At the request of Deputy Attorney General Rod Rosenstein, he and President Trump had an extended conversation to discuss the recent news stories,” White House Press Secretary Sarah Sanders said in the statement. “Because the President is at the United Nations General Assembly and has a full schedule with leaders from around the world, they will meet on Thursday when the President returns to Washington, D.C.”

Rosenstein on Monday was attending a previously scheduled “Principles Committee” meeting at the White House in place of Attorney General Jeff Sessions, who was en route to Washington from Alabama.

Earlier in the day, Rosenstein met again with White House Chief of Staff John Kelly. During that meeting, Rosenstein spoke to President Trump on the phone.

A source told Fox News that Rosenstein has neither resigned nor been fired. He is still deputy attorney general, for now.

Rosenstein's fate remains unclear, in the runup to the scheduled meeting with Trump.

Rosenstein had met with Kelly Friday afternoon to discuss the response to the Times report. After the meeting, Rosenstein put out another more strongly worded statement denying the story.

Rosenstein and Kelly also had discussions over the weekend. According to a source familiar with the talks, the subject of Rosenstein possibly resigning came up, though it is unclear whether he actually offered to resign.

Meanwhile, Rosenstein – who oversees Special Counsel Robert Mueller’s probe into Russia’s interference in the 2016 election – has repeatedly denied that bombshell report in The New York Times on Friday.

“The New York Times’s story is inaccurate and factually incorrect,” Rosenstein said in an earlier statement. “I will not further comment on a story based on anonymous sources who are obviously biased against the department and are advancing their own personal agenda. But let me clear about this: Based on my personal dealings with the president, there is no basis to invoke the 25th Amendment.”

In the wake of the Times report, Democrats have warned Trump not to remove Rosenstein. If Rosenstein were to leave office, U.S. Solicitor General Noel Francisco would be in line to oversee the Russia probe.

Fox News asked Defense Secretary Jim Mattis on Monday if he had ever heard any 25th Amendment talk. Mattis replied, “No.” Earlier Monday, both Secretary of State Mike Pompeo and U.S. Ambassador to the United Nations Nikki Haley said they had not heard anyone discussing the 25th Amendment either.

The New York Times report said Rosenstein had discussed wearing a "wire" to tape Trump and pursuing his removal from office in meetings and conversations with Justice Department and FBI officials. This would have been in the tumultuous days after James Comey was fired as FBI director, with the president citing in part a memo penned by Rosenstein -- reportedly catching him off guard.

Fox News has learned one key meeting took place on May 16, 2017 at Justice Department headquarters. Several people were in the room, including former FBI Deputy Director Andrew McCabe and former FBI counsel Lisa Page. Mueller was appointed as special counsel the next day.

According to the Times, none of Rosenstein’s proposals were acted upon and it remains unclear the level of seriousness Rosenstein had when making the suggestions.

One source who was in the room told Fox News the “statement was sarcastic and was never discussed with any intention of recording a conversation with the president.”

Further, The Washington Post quoted an unnamed individual saying Rosenstein quipped sarcastically after McCabe pushed for an investigation into the president, "What do you want to do Andy? Wire the president?"

The Times quoted other sources who said Rosenstein was serious, however.

Rosenstein, 53, has been targeted by Republicans for months. In July, Reps. Mark Meadows of North Carolina and Jim Jordan of Ohio, the chairman and a prominent member of the conservative House Freedom Caucus, introduced five articles of impeachment against Rosenstein.

Before named by Trump to serve as the No. 2 to Attorney General Jeff Sessions, Rosenstein served as the U.S. Attorney for the District of Maryland. Rosenstein took over the Russia probe after Sessions recused himself last year.