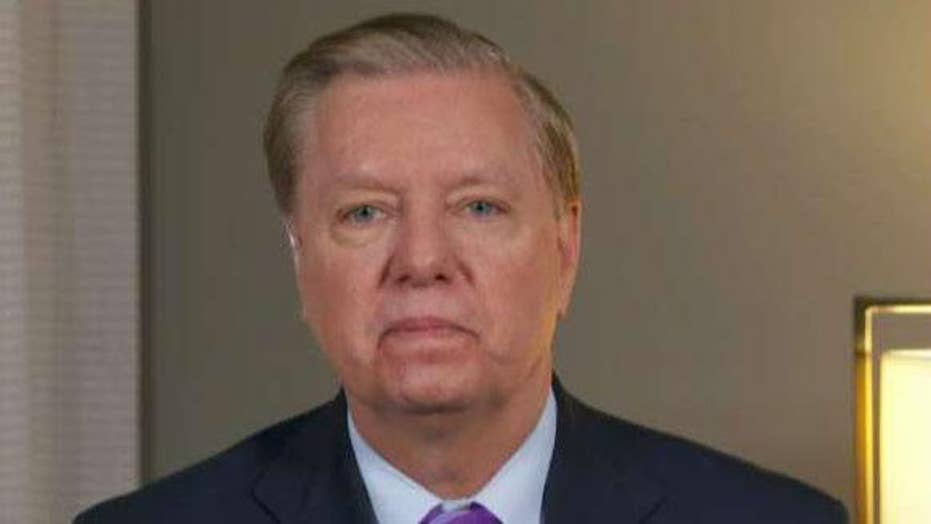 Sen. Graham: The media could care less about anything to do with Clinton they just want to 'get' Trump

Senate Judiciary Chairman Lindsey Graham weighs in on FISA warrants, the DOJ and the Mueller investigation.

Senate Judiciary Committee Chairman Lindsey Graham exclusively told "Sunday Morning Futures" that he is working to declassify a sensitive "document" that definitively proves that authorities knew the Steele dossier -- which the FBI used to justify the secret surveillance of a former Trump aide -- lacked any substantial independent corroboration.

Graham also previewed legislation he will introduce on Wednesday to halt what he called the "perfect storm" of illegal immigration that now constitutes an "invasion" at the southern border, and predicted that "90 percent of illegal immigration" from Central America would soon come to an end under his plan.

"There's a document that's classified that I'm gonna try to get unclassified that takes the dossier -- all the pages of it -- and it has verification to one side," Graham told anchor Maria Bartiromo. "There really is no verification, other than media reports that were generated by reporters that received the dossier."

Graham added: "So, the bottom line is the dossier has never been independently confirmed. It was used to get a warrant.  They knew the author of the dossier was on the Democrat Party payroll. He hated Trump; they got the warrant anyway. Most Americans should be very upset about that. I'm very upset about it. And we're going to get to the bottom of it."

The FISA application also copied and pasted directly from a Washington Post opinion piece that claimed the Trump campaign had "worked behind the scenes" to "gut" the GOP platform on Russia and Ukraine.

The FBI seemingly conducted no independent review of the opinion article's disputed claims, which were widely cited as evidence the Trump team was compromised by Russia and working to publicly appease Russian President Vladimir Putin. Despite the brouhaha, Special Counsel Robert Mueller's Russia probe only briefly mentioned the episode, saying there was no evidence of misconduct when a lone Trump official vetoed a single delegate's proposed platform change.

President Trump has vowed to declassify the full FISA applications to surveil Page, and related documents.

Graham indicated, however, that his promised "deep dive" into the Russia probe's origins is currently pending the completion of Inspector General Michael Horowitz's own investigation into alleged FBI and DOJ misconduct during the 2016 presidential campaign.

"I'm waiting for Horowitz to get his report done," Graham said. "But we had a pretty big bombshell this week."

Kim Strassel says an FBI director should be making issues of the law, not entering the political realm.

Graham specifically cited the report from The Hill's John Solomon that the FBI was expressly told that Steele, the bureau's confidenial informant, had admitted to a contact at the State Department that he was "keen" to leak his discredited dossier for purposes of influencing the 2016 election. Steele also acknowledged that his dossier was funded by the Democratic National Committee (DNC) and Hillary Clinton campaign.

"Christopher Steele was trying to leak it to everybody," Graham said.

Deputy Assistant Secretary of State Kathleen Kavalec’s written account of her Oct. 11, 2016, meeting with Steele was apparently sent to the FBI, according to records unearthed in a transparency lawsuit by Citizens United. Nevertheless, the FBI included claims in Steele's dossier in its successful FISA warrant application to monitor Page.

"But-for the dossier, there would be no warrant against Carter Page," Graham said. "The meeting on Oct. 11 was 10 days before the FISA warrant application. So the FBI was on notice that their confidential informant went to the Department of State to urge the Department of State to take the dossier and leak it to the public to affect the election. That's about as sick as it gets."

The only notation that the FBI included in the FISA application to alert the judge as to Steele's bias was that his information was prepared in connection with a presidential campaign.

The application did not mention that the dossier had been funded by the DNC and Hillary Clinton campaign, nor did the application mention that Steele had admitted to wanting the claims in his dossier to go public before Election Day.

News of that surveillance, which also leaked, kickstarted the Trump-Russia collusion narrative.

In letters last week, a slew of Republican senators, including Graham, demanded answers from the State Department, as well as all related documents.

In a pair of missives to FBI Director Christopher Wray and Secretary of State Mike Pompeo, Sens. Ron Johnson, R-Wis., and Chuck Grassley, R-Iowa, said there was now clear evidence that Steele was simply out to smear then-candidate Trump.

TRUMP ADMIN CRACKS DOWN ON ILLEGAL IMMIGRANTS IN PUBLIC HOUSING

"Based on the publicly-released version of the typed notes of the meeting, it appears Steele's intent of the meeting with the State Department was to maximize the impact of the unverified information that he had acquired in an effort to undermine the Trump campaign," Grassley and Johnson wrote. "Further, if that information was included in the material submitted to the FBI, then the FBI may have been aware of Steele's political motivations before submitting any FISA application."

The senators specifically  said they want to know when the State Department shared these details with the FBI. Kavalec's Oct. 13, 2016, email was apparently sent to someone in the FBI, though the recipient's identity is completely redacted, as is an attachment.

A Central American migrant takes a nap in the shade under a freight train car, during his journey toward the US-Mexico border, in Ixtepec, Oaxaca State, Mexico, Tuesday, April 23, 2019. Whereas in late 2018 and early 2019 Mexican authorities were handing out humanitarian visas and processing asylum requests, they have now largely stopped doing so, instead making migrants wait weeks in the southern town of Mapastepec for visas that never come. (AP Photo/Moises Castillo)

Separately, Graham also announced that he will introduce new legislation on Wednesday to address what he called the "broken" U.S. asylum laws contributing to the ongoing humanitarian crisis along the southern border. Among the changes Graham will seek is to prevent people from asylum at the border, as opposed to a consulate -- a move that would raise constitutional issues if implemented.

Graham also said he wants to change the law to permit the U.S. to hold minor children for longer periods, to discourage adults from bringing children to the border as a legal "shield." Currently, Graham said, adults seeking asylum with children are released into the U.S. and never heard from again. (The Trump administration last year altered its previous zero-tolerance immigration policy to preclude family separations at the border, amid a backlash.)

"We're going to change the asylum law, that you have to apply in the country where you live, or in Mexico," Graham said. "We're going to stop Central American applications being made at the border, because we don't have enough judges for hearing dates. We're gonna go to 100 days, we can hold minor children for 100 days so we can actually process the entire family without letting them go. We're gonna increase judges by 500; we got almost 900,000 backlog of asylum claims. We're gonna wipe out the backlog [of asylum claims.]"

Graham added: "If you're an unaccompanied minor, we're going to send you back to Central America as if you lived in Mexico, which would be a change in our laws. This should stop 90 percent of the illegal immigration from Central America."