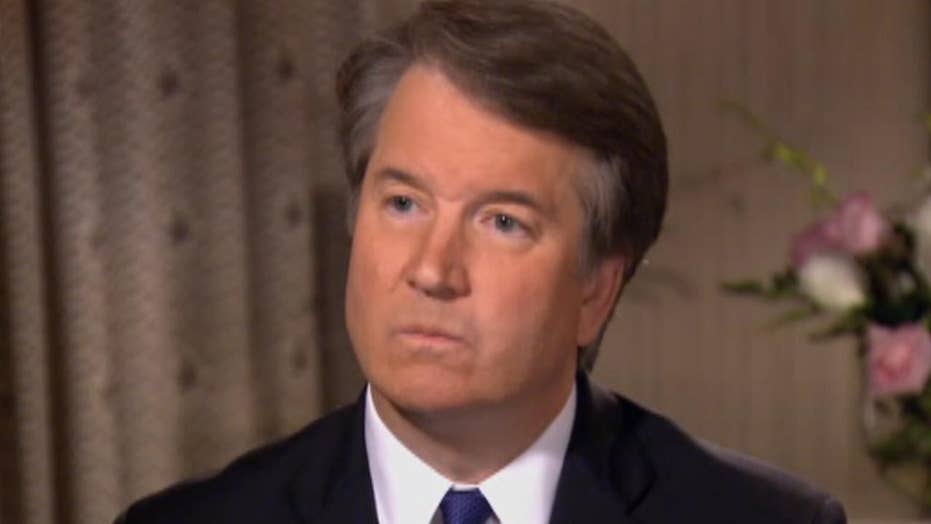 Republicans signaled Tuesday they aren’t abandoning Brett Kavanaugh’s nomination for the Supreme Court as they cast doubt on graphic new allegations made public by attorney Michael Avenatti, and as Kavanaugh insisted he’s never been involved in any sexual assault.

Avenatti on Tuesday tweeted a "sworn declaration" from a woman named Julie Swetnick who claimed the Supreme Court nominee was involved in "gang" rapes in the early 1980s. She claimed Kavanaugh was "present" when she became a "victim" of one of those alleged assaults. Swetnick’s accusations followed claims of sexual misconduct during high school and college against Kavanaugh from two other women. Kavanaugh has denied all the accusations, and responded to Avenatti’s claim by saying: “This is ridiculous and from the Twilight Zone. I don’t know who this is and this never happened.”

Late Wednesday, The Wall Street Journal reported that approximately 10 years ago, Swetnick retained the law firm of Katz, Marshall & Banks to represent her in dispute with her former employer, insurance company New York Life, over a sexual harassment complaint Swetnick had brought.

Meanwhile, Politico reported that a former boyfriend of Swetnick had sought a restraining order against her in 2001. In an interview with the publication, Richard Vinneccy said that Swetnick had threatened him after they broke up and he married his current wife.

"I have a lot of facts, evidence, that what she’s saying is not true at all," said Vinneccy, who declined to comment further on Swetnick's claims against Kavanaugh.

According to The Washington Post, in 2015, the state of Maryland filed a lien against Swetnick's property, citing more than $30,000 in unpaid taxes dating back to 2008. Court records obtained by The Post showed that the total amount owed, nearly $63,000, was resolved in December 2016, although the paper reported it was unclear exactly how.

And, in 2017, the federal government filed a lien on Swetnick's property, citing a $40,000 unpaid tax bill from 2014, according to The Post. That lien reportedly was released in March 2018, and the debt was similarly satisfied.

In response to Avenatti's claim that the committee has "wasted days in your rush to confirm Brett Kavanaugh," as well as his demands for an FBI investigation, a polygraph examination of Kavanaugh, and other requests, Davis outlined the steps the Judiciary Committee took in response to his client's allegations.

For his part, President Trump fired back at Avenatti – who represents adult-film star Stormy Daniels in a suit against the president, and who is flirting with a 2020 Democratic White House bid – as someone with a history of “making false accusations.”

“Avenatti is a third rate lawyer who is good at making false accusations, like he did on me and like he is now doing on Judge Brett Kavanaugh,” Trump tweeted. “He is just looking for attention and doesn’t want people to look at his past record and relationships - a total low-life!”

Speaking to reporters in New York, the president expressed hope Kavanaugh would be confirmed by the Senate soon, despite the allegations.

“Hopefully over the next couple of days it will be settled up and solved and we will have a Supreme Court justice who will go down as one of our greatest ever,” the president said.

Sen. Lindsey Graham, a Republican on the Senate Judiciary Committee, tweeted that he hopes people will “highly suspicious of this allegation presented by Michael Avenatti,” questioning parts of Swetnick’s story.

“I have a difficult time believing any person would continue to go to – according to the affidavit – ten parties over a two-year period where women were routinely gang raped and not report it,” Graham, R-S.C., tweeted.

Arizona Sen. Jeff Flake, a key Republican vote, said Wednesday during a floor speech that he will make up his mind after Thursday’s planned committee hearing with both Kavanaugh and Ford.

Ford has accused Kavanaugh of trying to force himself on her during a party while she was 15 and he was 17. Kavanaugh has also been accused by a second woman of exposing himself during a college party at Yale, something he has denied.

“I am not psychic,” Flake said. “I am not gifted with clairvoyance. Given these limitations, I'll have to listen to the testimony before I make up my mind about the testimony.”

So far, despite the chaos caused by the Avenatti allegations, the hearing is still scheduled for Thursday morning.

Meanwhile, Democrats seized on Avenatti’s allegation, with all 10 Democratic members of the Senate Judiciary Committee urging Trump to “immediately” withdraw the nomination or order an FBI investigation.

“We are writing to request that you immediately withdraw the nomination of Brett Kavanaugh to be an Associate Justice on the Supreme Court or direct the FBI to re-open its background investigation and thoroughly examine the multiple allegations of sexual assault,” the Democrats said.

One Democrat, Sen. Jeff Merkley, said he was going so far as to file a federal lawsuit asking the courts to stop Kavanaugh’s confirmation process until “Kavanaugh’s full record is available for public scrutiny.

“The events of the past ten days have only underscored how critical it is that the Senate conduct a careful and comprehensive review of a nominee before giving its consent,” Merkley, D-Ore., said.

In several tweets, Avenatti fired back at the president’s comments about him, saying, “Trump pretends he is a tough guy. He is nothing of the kind.”

Kavanaugh, in prepared testimony released ahead of Thursday’s hearing, describes sexual assault as “horrific” and “morally wrong” and says he’s “never sexually assaulted anyone – not in high school, not in college, not ever.”

“I am here this morning to answer these allegations and to tell the truth,” Kavanaugh says in remarks released by the committee. “And the truth is that I have never sexually assaulted anyone – not in high school, not in college, not ever.”

In his testimony, Kavanaugh admits to “juvenile misbehavior” that makes him “cringe now” but says “that’s not why we are here today.”

“What I’ve been accused of is far more serious than juvenile misbehavior,” Kavanaugh says. “I never did anything remotely resembling what Dr. Ford describes.”

Ahead of the hearing, the Senate Judiciary Committee released copies of the calendar full of hand-written notes from May, June, July and August of 1982.

The calendar reflects the daily activities of a typical 17-year-old boy: plans to mow the grass, go to the movies, play sports, go to “beach week” and attend summer camp. It includes mentions of prom, being grounded, birthday parties, lifting weights and interviewing at Yale and Brown universities.

Speaking to the Washington Post, Ford said she believes the allegations she has detailed happened during the summer of 1982, though she can’t remember where exactly the party was or how she got there.

It’s been suggested that the calendars may be used by Kavanaugh to suggest nothing in it alludes to the type of party described by Ford.

Meanwhile, ahead of the hearing, Ford’s attorneys have released statements from four other people who recount Ford telling them about the accusations over the last few years. None of those people, though, claim to have had knowledge in 1982. Ford says she didn’t tell anyone until 2012.