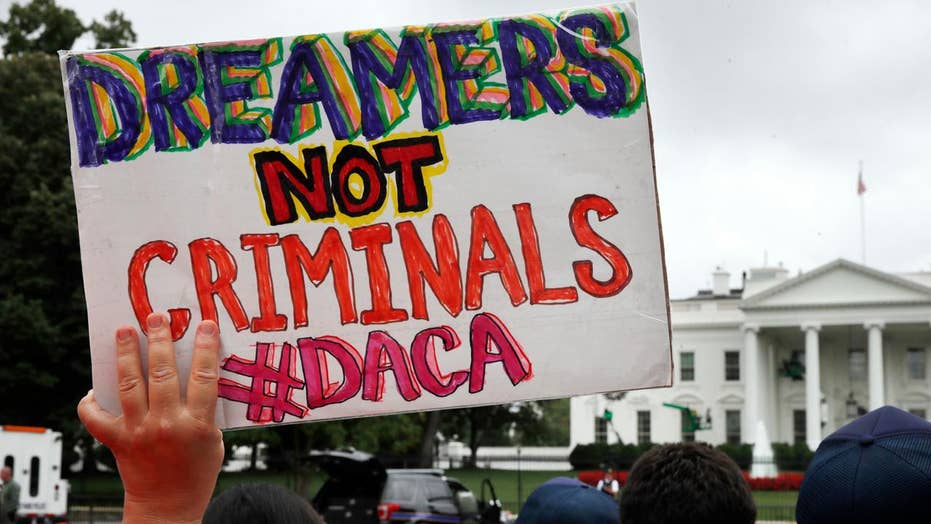 Fears of a Republican split over Trump's DACA announcement

Congressional Republicans indicated Tuesday they will take up the Trump administration's call to consider legislation to replace the Obama-era DACA program, though condemnation from Democrats over the decision to end it points to a heated battle ahead.

In a show of unity, Sens. Lindsey Graham, R-S.C., and Dick Durbin, D-Ill., spoke to reporters about their push for a bipartisan "Dream Act"-style bill Tuesday afternoon.

“The Congress is going to have to up its game,” Graham said, urging congressional colleagues to work with them – and the president to “get involved personally” by working the phones.

Durbin said the "countdown to deportation" sets a clear timetable for lawmakers to act.

Other Democrats, though, hammered the president for ending the program at all, leaving unclear how much bipartisan cooperation will be seen.

Though Democrats wanted Trump to keep the program in place, the administration announced Tuesday it will “wind down” the Deferred Action for Childhood Arrivals, or DACA, program over the next six months.

The program enacted by former President Barack Obama in 2012 protected illegal immigrants brought to the United States when they were young. An estimated 800,000 young people have been protected from deportation under the program.

In announcing the decision, Trump put the onus on Congress to come up with a replacement.

“As president, my highest duty is to defend the American people and the Constitution of the United States of America. At the same time, I do not favor punishing children, most of whom are now adults, for the actions of their parents," he said in a statement. "Congress now has the opportunity to advance responsible immigration reform that puts American jobs and American security first.”

The six-month delay gives Congress time to craft a legislative solution. And while Democrats condemned the decision, they also voiced hope that the legislative branch can come up with an alternative.

Whether the two parties can find common ground on an immigration deal that has eluded Congress for years, however, remains to be seen.

Republican leaders made clear Tuesday they would try.

“However well-intentioned, President Obama’s DACA program was a clear abuse of executive authority,” said House Speaker Paul Ryan, R-Wis. “Just as the courts have already struck down similar Obama policy, this was never a viable long-term solution ... . It is my hope that the House and Senate, with the president’s leadership, will be able to find consensus on a permanent legislative solution."

Sen. Thom Tillis, R-N.C., already has been working on a conservative version of the so-called Dream Act.

Sen. Mike Lee, a Utah Republican, argued Tuesday that Congress, not the president, must find a reasonable, compassionate alternative.

“DACA was an illegal abuse of executive power, and it’s important to reaffirm that the president cannot unilaterally rewrite the law,” he said. “Today’s decision puts the ball in Congress’ court. … A balance between compassion and deterring future illegal immigration can be found.”

Attorney General Jeff Sessions also made clear Tuesday that “no new initial (DACA) requests or associated applications after today will be acted on.”

The administration framed the decision as the result of legal pressure.

Sessions argued that attorneys general from several states are challenging the constitutionality of DACA, so the administration chose to act instead of risking the courts abruptly shutting down the program.

“Today is a dark day in America,” said California Democratic Rep. Lou Correa, whose Orange County district in majority Latino. “The only crime DACA students are guilty of is aspiring for the American Dream. … I hope the president will not go after children, and will reconsider his decision.”