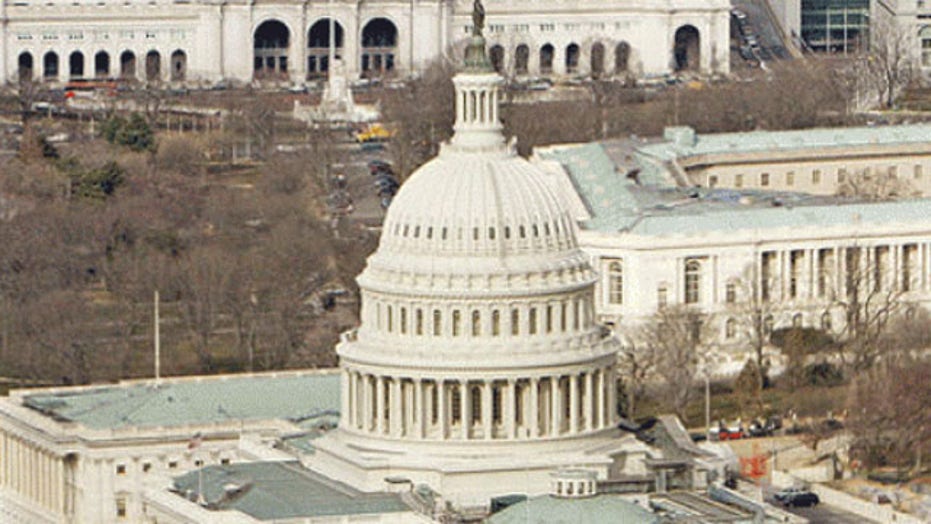 Will Republicans expand their majority in the House?

While the nation’s political attention remains fixed on next week’s Senate races, Republicans are poised to make big gains in the House – though whether they hit their lofty goal of a 245-seat majority will come down to some nail-biting races.

Six days before Election Day, Republicans are liking their odds in both chambers. Polling consistently shows Republican voters are more jazzed about this election, which could translate to higher turnout. But in the House races, the opportunities for GOP pickups are numerous -- and very few Republican seats are in danger of flipping.

Even Republican Rep. Michael Grimm, a Staten Island congressman facing a 20-count indictment, could hold onto his seat.

As on the Senate side, Republicans have used President Obama’s baggage to weigh down the Democrats, forcing them to distance themselves from the president.

“When you’ve got midterm elections, what is basically at stake here is the president’s job performance,” said Terry Madonna, director of the Franklin & Marshall College Poll. “Whether it is Ike or Nixon, Reagan or Bush, the incumbent party cedes seats.”

So, “what the Democrats are trying to do is make the midterms about their opponents, and the Republicans are making this about Obama.”

If polls numbers are to be believed, the GOP has the more successful strategy.

According to The Washington Post’s Election Lab, Republicans have a 99 percent chance of keeping their majority and likely will pick up eight new seats, bringing their majority up to 242. It wouldn’t be quite the victory the Republican Congressional Campaign Committee envisioned with its “Drive to 245,” campaign – a push to build a 245-seat majority, a level not seen since the Truman administration -- but it would cement what they feel is both a mandate from voters and a bulwark against the president on Capitol Hill.

The Rothenberg Political Report says Democrats would have to win 17 new House seats to get back the majority, and that’s clearly not going to happen. They predicted Republicans picking up eight to 10 House seats as of Oct. 24. Meanwhile, Sabato’s Crystal Ball predicts a six-to-nine seat pickup for the GOP. “We can more easily imagine Republicans overperforming that range than underperforming it,” the Crystal Ball’s Kyle Kondik wrote last week.

He and others note that the Republicans have been gobbling up last-minute ad buys in races that were not even seen as competitive but are now showing a shift. Take Hawaii’s 1st District, which was supposed to be solid blue -- but according to a new poll by the Honolulu Star-Advertiser on Oct. 24, Republican Charles Djou is now tied with Democrat Mark Takai 47-47 percent.

Republicans also are eyeing potential wins in Iowa’s 1st, 2nd and 3rd District House races, hoping that Republican Joni Ernst’s edge in the Senate race will give the party the boost it needs to grab these seats among traditionally Democratic electorates.

But out of the more than 60 competitive races identified by The Cook Political Report, there are enough toss-ups and close calls to keep election watchers up all night and perhaps waiting days for outcomes. Real Clear Politics lists 21 toss-up races. Seven of them are currently Republican-held.

Some of the nail-biters are in traditionally red states, like the open seat in Arkansas' 1st District, an open Republican seat contest which is pitting former Democratic North Little Rock Mayor Patrick Henry Hays against Republican French Hill.

Republicans also are trying to hold the seat in West Virginia’s 2nd District, now held by Rep. Shelley Moore Capito, the favorite to win that state’s Senate race. Though Republican presidential candidate Mitt Romney won big there in 2012, Democrat Nick Casey has made noticeable strides and now the race is considered a toss-up, or merely leaning Republican, among the big election forecasters.

Meanwhile, Grimm, despite being indicted on federal fraud charges, is thought to be in a competitive race against gaffe-prone Democratic candidate Domenic Recchia.

And Republicans are looking at possible pick-ups in races from Arizona to California to Illinois.

In New Hampshire, Democratic incumbent Rep. Carol Shea-Porter is in a pure toss-up against former Republican Rep. Frank Guinta for the 1st District seat. Guinta won the seat from her in the 2010 midterms, and then she got it back in 2012.  The most recent New England College poll on Oct. 22 had him ahead by 1 point.

Democratic strategist Dan Gerstein said that while “neither party has any kind of positive campaign for the voters,” it is clear the Democrats are at a disadvantage, and it is largely due to the presidential drag.

“The battle is being waged in states where,” he said, “the negative energy toward Obama is a pretty powerful force.”