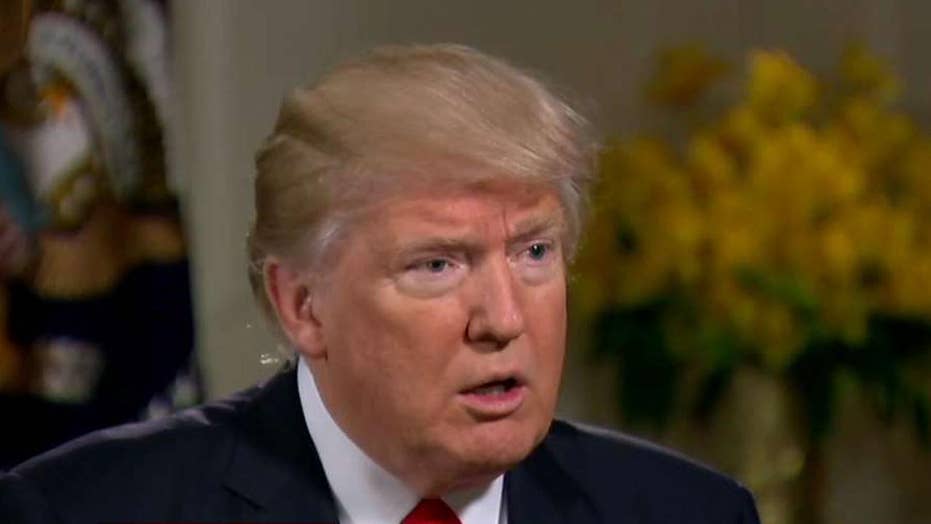 David French on the president's interview with Bill O'Reilly

Several Republican lawmakers sought Sunday to distance themselves from President Trump’s comments he made about Russian President Vladimir Putin, made during an exclusive interview with Fox News’ Bill O’Reilly.

Trump has long expressed his desire to mend the relationship with Russia. When told by O’Reilly that the Russian leader is a “killer,” Trump replied that the U.S. has killers too.

"What do you think? Our country's so innocent?" Trump said during the taped interview broadcast during Sunday's Super Bowl pregame show.

Trump said in the interview that he respected Putin, "but that doesn't mean I'm going to get along with him. He's a leader of his country. I say it's better to get along with Russia than not. And if Russia helps us in the fight against ISIS, which is a major fight, and Islamic terrorism all over the world — that's a good thing," Trump said, using an acronym for the Islamic State group. "Will I get along with him? I have no idea."

O'Reilly then said about Putin: "But he's a killer, though. Putin's a killer."

Senate Majority Leader Mitch McConnell, R-Ky., immediately looked to distance himself from Trump’s comments in an interview on CNN’s “State of the Union.”

“Putin's a former KGB agent. He's a thug. He was not elected in a way that most people would consider a credible election," he said. “The Russians annexed Crimea, invaded Ukraine and messed around in our elections. And no, I don't think there's any equivalency between the way the Russians conduct themselves and the way the United States does."

Sen. Ben Sasse, R-Neb., who is also one of Trump’s Republican critics, said on ABC’s “The Week” that "there is no moral equivalency between the United States of America, the greatest freedom living nation in the history of the world, and the murderous thugs that are in Putin's defense of his cronyism.”

Sasse added that he didn’t know what Trump was trying to do with “comments like these.”

.@POTUS statement suggesting moral equivalence between Putin's Russia and the United States of America is deeply troubling and wrong.

When has a Democratic political activists been poisoned by the GOP, or vice versa? We are not the same as #Putin. MR

Vice President Pence tried to reduce some of the heat on Trump in his interview on CBS’s “Face the Nation.”

"American ideals are superior to countries all across the world," Pencesaid. "But, again, what the president is determined to do, as someone who has spent a lifetime looking for deals, is to see if we can have a new relationship with Russia and other countries that advances the interests of America first and the peace and security of the world."

Trump has praised Putin and signaled that U.S.-Russia relations could be in for a makeover under his leadership, even after U.S. intelligence agencies concluded that Russia meddled in the 2016 U.S. presidential campaign to help Trump defeat Democrat Hillary Clinton.