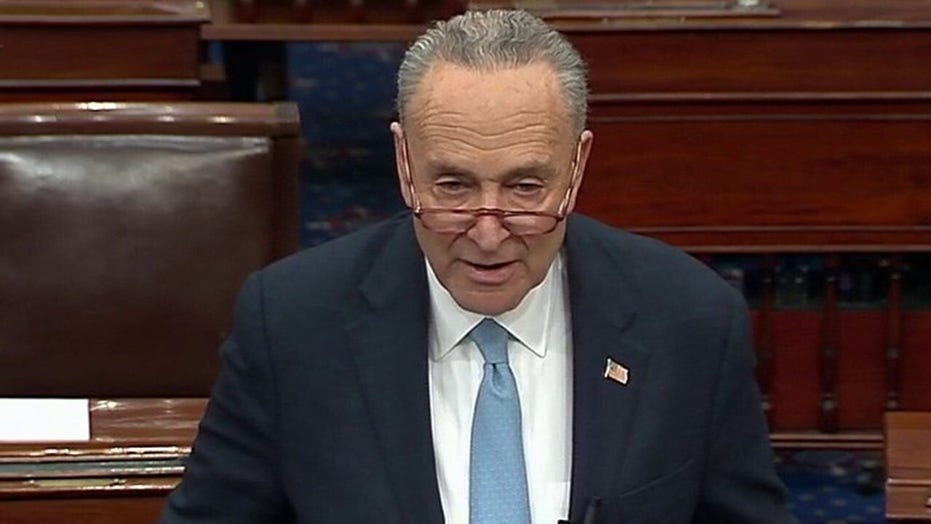 Schumer: I shouldn't have used the words I did, but in no way was I making a threat

Senate Minority Leader Chuck Schumer says his controversial comments involving Supreme Court Justices Gorsuch and Kavanaugh were meant to highlight the political consequences for President Trump and Senate Republicans if they stripped away a woman's right to choose.

Republican attorneys general are condemning Senate Minority Leader Chuck Schumer, D-N.Y., after he warned Supreme Court Justices Brett Kavanaugh and Neil Gorsuch that there will be consequences if they rule a certain way in an abortion case that was argued before the court Wednesday.

Schumer said the Trump appointees "will pay the price," and warned, "You won’t know what hit you if you go forward with these awful decisions," during an address at a rally hosted by the Center for Reproductive Rights. The event was held outside the Supreme Court building while arguments took place in a case dealing with a Louisiana law that restricts who can perform abortions.

"Senator Schumer should immediately apologize to Justice Gorsuch, Justice Kavanaugh, and the entire Supreme Court," said Louisiana Attorney General Jeff Landry, who was in the courtroom as his state's solicitor general argued before the justices. He continued, "Schumer's threats were dangerous and divisive, something all reasonable people can agree upon."

"Any person who professes to care about the rule of law and the impartiality of the judicial branch should roundly condemn @SenSchumer for threatening two Supreme Court Justices. Schumer should be censured for his actions," he tweeted.

Utah Attorney General Sean Reyes retweeted Morrisey, agreeing that Schumer "should be censured and set down for his dangerous and threatening remarks against the two honorable Supreme Court Justices."

Texas Attorney General Ken Paxton said it was "immoral," "despicable," and "appalling" that Schumer thought it was proper to speak that way.

Dave Yost, Attorney General of Ohio, also said Schumer should be censured by the Senate.

Florida's Ashley Moody called Schumer's behavior "embarrassing and unethical," while Georgia Attorney General Carr quoted Supreme Court Justice Clarence Thomas, who once said that officials in Washington "have decided that rather than confront the disagreements and the differences of opinion, we'll simply annihilate the person who disagrees with us."

Schumer began by pushing back, referring to the significance of a woman's right to choose, which he believes would be hampered by the Louisiana law that requires abortion providers to have admitting privileges at a nearby hospital.

Schumer went on to recognize, however, that his choice of words could have been better.

"Now I should not have used the words I used," Schumer said. "They didn't come out the way I intended to." Schumer did not apologize to the justices and claimed that McConnell understood that he did not intend to make any threat against them.