Why the Democratic presidential candidate's strategy may backfire

CEDAR FALLS, Iowa – I was closer to the likely Democratic presidential nominee this morning than I have been since she launched her campaign 37 days ago – just a few feet away – but I’m still not holding out hope of getting an interview just yet.

Last night when I checked into the hotel here in eastern Iowa, the clerk randomly gave me room number 331. At first I thought it was odd since the previous night a different hotel had randomly given me number 330.

Yet this time when I got off the elevator I noticed something even more unusual. There were a couple of Secret Service agents outside the door of a room diagonal to mine.

Wait, I thought, is Hillary Clinton in that room across the hall? Nah.

But then as I opened my door I glanced back at a Secret Service agent who was clearly laughing. And clearly amused by the fact that the hotel clerk had randomly placed a Fox News correspondent just a few yards from The Candidate Who Will Not Be Taking Your Questions Today (TCWWNBTYQT).

After dropping my bags on the bed, I dragged the rolling chair out in the hallway and knocked on a Clinton staffer's door, telling him I was waiting for my interview.

A light moment on the campaign trail, sure. Except it’s a serious matter. As I write this dispatch in my hotel room, I am literally closer to Clinton -- just a few yards away behind a door with a new Secret Service agent on the watch shift -- than I was yesterday while trying to do my job.

Yesterday several of us were standing out in a driveway in Mason City as Clinton rolled up to the home of Dean Genth and Gary Swenson -- one of the first gay couples to marry in Iowa -- for a campaign event with about 50 Democrats.

There was no black "Scooby Van" this time. Clinton was in a smaller maroon minivan and she had the Secret Service pull her right up to the garage of the home in such a way that the vehicle shielded her and we could not even see her enter.

As Clinton left the home, the minivan was a few yards out of the garage so we could actually see her and several of us shouted.  There was no time for a long question as she hopped into the van so I shouted, "Why won't you answer any questions?"

So we still have nothing new from her on the Clinton Foundation, the Trans-Pacific Partnership, the email server, ISIS, policing in America, the Benghazi investigation, the $25 million earned by both Clintons in speeches in 2014.

I will head out to the hallway in a few minutes. Maybe we'll run into each other at the ice machine? 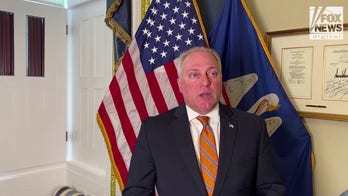 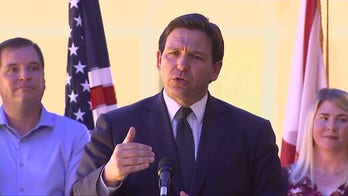