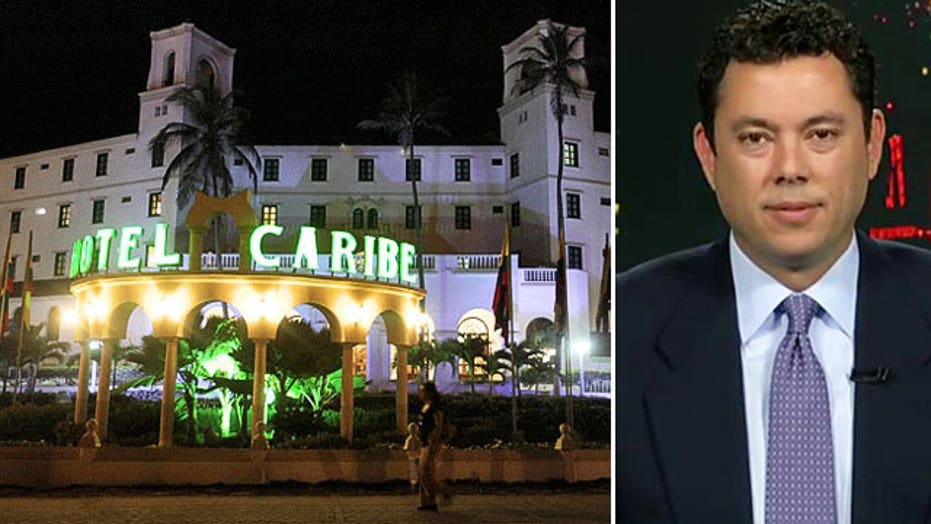 A Republican congressman on Thursday urged the White House to "come clean" after claiming to have received "very credible and very specific allegations" that a member of the White House team was "intimately involved with a prostitute" while on assignment in Colombia for a presidential visit.

Rep. Jason Chaffetz, R-Utah, also questioned whether a double standard was at play, considering many Secret Service and military personnel were disciplined on that trip for seeing prostitutes and other inappropriate behavior.

"The White House needs to come clean," Chaffetz told Fox News. He separately has written a letter to White House Chief of Staff Denis McDonough seeking "all documents" from a White House counsel internal review of the incident.

The Washington Post reported late Wednesday that the White House team member in question is Jonathan Dach, then a 25-year-old Yale student and volunteer on the advance team. His father, Leslie Dach, is a prolific Democratic donor and currently works in the Obama administration, in the Department of Health and Human Services.

According to the Post, Jonathan Dach himself ironically now works, on contract, as an adviser in the State Department's Office on Global Women's Issues.

Chaffetz questioned how Dach has been treated, compared with other personnel who were disciplined -- calling it "offensive to the morale" of the Secret Service, which is facing a raft of controversies over everything from the Colombia scandal to recent security failures.

"The concern is that when it came to the White House and the White House taking care of its own personnel, a totally different standard," Chaffetz said. "And perhaps some misdirection and some cover-up to make sure that that story never saw the light of day before the 2012 elections."

After The Washington Post reported overnight that White House senior aides had information about these allegations and never thoroughly investigated them, White House spokesman Eric Schultz downplayed the claim.

"As was reported more than two years ago, the White House conducted an internal review that did not identify any inappropriate behavior on the part of the White House advance team," he said.

Schultz said the White House counsel asked the Secret Service for information at the time, which turned up a hotel log -- according to the Post, the log showed Dach had a woman registered to his room shortly after midnight on April 4, 2012.

But the White House previously has claimed the volunteer was wrongly implicated based on inaccurate hotel records.

Schultz also said "there was no White House interference with an IG investigation."

This was in response to an allegation from David Nieland, the lead investigator into the scandal who, according to the Post, told Senate aides that he was directed to delay the release of the report until after the 2012 election.

He reportedly said that he was instructed by his superiors in the Department of Homeland Security (DHS) inspector general's office to "withhold and alter certain information in the report of investigation because it was potentially embarrassing to the administration."

Nearly two dozen Secret Service agents were disciplined or fired as part of the scandal, which began when Secret Service agents brought prostitutes into their hotel in Cartagena, Colombia ahead of President Obama's trip to the Summit of the Americas in April 2012. The Post reports that the Secret Service twice shared the findings of its own internal investigation with top White House officials, who concluded that the advance team member had done nothing wrong.

Charles Edwards, the Department of Homeland Security's acting inspector general at the time of the investigation, told the Senate staffers that any changes to the report were part of the editing process, a statement that was backed by Schultz.

"As the bipartisan Senate investigation found ... changes made to the IG Report were 'part of the ordinary process of editing the report' and found that allegations that changes were made because they were embarrassing could not be substantiated," Schultz said in a statement late Wednesday.

The Post reported that Dach repeatedly has denied bringing prostitutes to his hotel room. Prostitution is legal in parts of Colombia, including in Cartagena.

"The allegations about any inappropriate conduct by Jonathan Dach in Cartagena are utterly and completely false. Anyone who knows Jonathan knows how ludicrous these allegations are," Sauber said.

"The Post bases its allegations almost exclusively on a hotel log with the name of a prostitute and a room number. Yet neither Jonathan Dach's name nor his signature appears on the hotel log or any piece of paper with a foreign national," he said.

The DHS inspector general's office conducted its own investigation into the scandal at the request of a subcommittee of the Senate Homeland Security and Governmental Affairs Committee. Nieland told staffers that Edwards had asked him to remove references to Dach in their report after Edwards had briefed then-Homeland Security secretary Janet Napolitano on the advance team member's possible involvement. A spokesman for Napolitano denied that she had asked for the report to be altered or delayed.

Nieland and two other members of the office later claimed that they were put on administrative leave for questioning the changes to the report, claims that The Post reports their superiors denied.