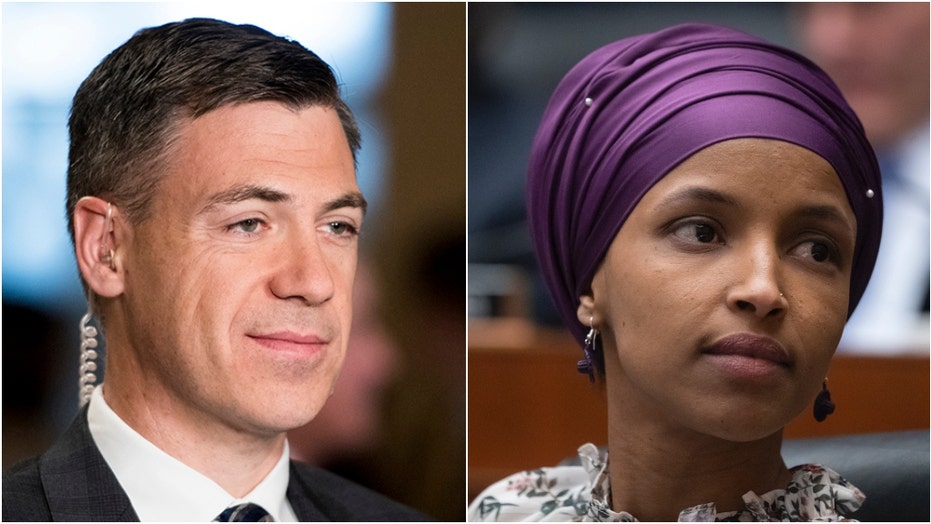 An Indiana congressman who served in Afghanistan as a member of the Navy Reserve spoke out on behalf of America's military veterans Wednesday after U.S. Rep. Ilhan Omar, D-Minn., claimed she suffered from post-traumatic stress disorder.

U.S. Rep. Jim Banks, a Republican, said Omar's comments were a "disgrace," calling the remarks "offensive to our nation's veterans who really do have PTSD after putting their life on the line to keep America safe."

Omar had made her remarks during a news conference with other Democrats on Wednesday, at which she said she "felt ill" because of "everything that is taking place" in the Middle East -- a reference to the recent U.S. tensions between the U.S. and Iran, including last week's U.S. airstrike in Baghdad and Iran's missile attacks early Wednesday against airbases in Iraq where U.S. service members are stationed.

"And I think every time I hear about ... I hear of conversations around war, I find myself being stricken with PTSD," she said. "And I find peace knowing that I serve with great advocates for peace and people who have shown courage against war."

After Banks took issue with her comments, Omar posted a reply on Twitter, making reference to her youth in war-torn Somalia. Omar left her homeland with her family near the start of the Somali Civil War in 1991 and spent four years at a Kenyan refugee camp before immigrating to the U.S. in 1995.

"Hi Jim, I survived war as a child and deal with post-traumatic stress disorder—much like many who have served or lived through war," she wrote in the tweet, which was addressed to Banks but not tagged. "It’s shameful that you as a member of Congress would erase the PTSD of survivors."

But Banks doubled down on his comments later Wednesday evening, posting a video that showed Omar and other Democrats giggling in the background as their colleague, U.S. Rep. Sheila Jackson Lee, D-Texas, spoke to reporters about the more than 4,000 U.S. service members killed in Iraq over the years.

"Your words and actions at today’s press conference reveal your feelings toward our soldiers serving abroad and the video speaks for itself," Banks wrote, including a video of the news conference shared by Rep. Jody Hice, R-Ga.

Omar posted another message about a half-hour later, elaborating that she had "lived in a war zone" and had "seen what conflict does to families and communities."

"Dear @RepJimBanks...Veterans like us know that people wearing uniforms aren’t the only ones impacted by war.@Ilhan is a refugee,"  the group said. "We stand with her against hawkish elites like you."

Others also noted that PTSD doesn't just affect those who serve in the military.

But some commenters came to Banks' defense as well.

"If you aren't familiar with Banks, he's been with the Navy since 2012," one Twitter user wrote, "and was deployed to Afghanistan about 6 years ago. So he knows a little something about PTSD."