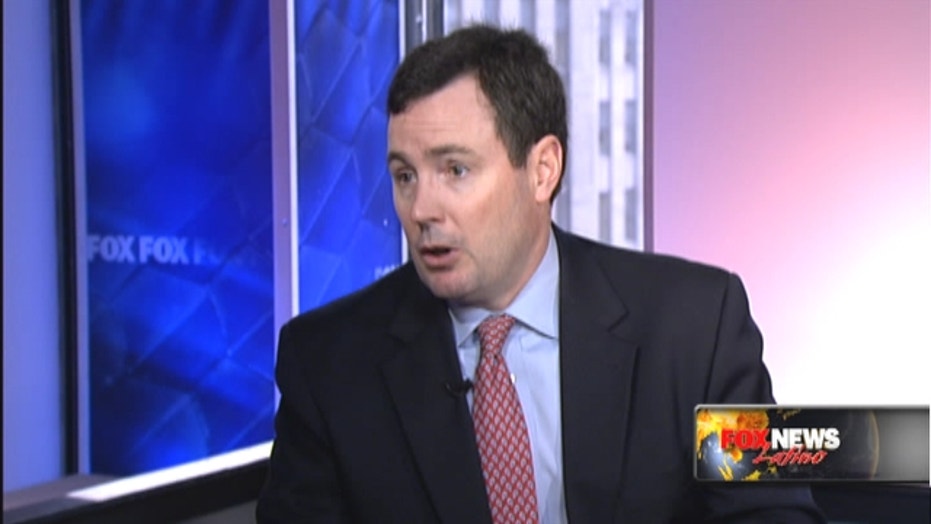 Man whose father was killed by terrorist shares story

Joseph Connor tells his story of his father being killed by a terrorist being harbored in Cuba.

For many people, it was another headline about Cuba in a week of symbolic and substantive changes in relations between the United States and its Caribbean adversary.

The White House announced Tuesday that it was taking Cuba off the list of states that support terrorism. Obama administration officials said that Cuba had met key criteria for being delisted, including not supporting terrorism in the last six months, and a pledge by Cuban President Raul Castro that it would not do so in the future.

But the news hit Joseph Connor, a Wall Street executive and father of two, like a punch in the gut.

To Connor, Cuba is the place that is protecting William Morales, a Puerto Rican nationalist convicted in connection with bombings in New York in the 1970s, one of which killed the New Jersey resident’s father.

Morales was in the group known as the Armed Forces of National Liberation or FALN, and was believed to have been the mastermind of a bombing that occurred in 1975 at Manhattan’s Fraunces Tavern, where Connor’s father, Frank, was having a meeting with clients.

We're the most powerful country in the world, yet we can't negotiate. I'm not going to buy that two years down the road, these guys will be returned.

— Joseph Connor, speaking about Cuba's harboring of a man tied to his father's killing

“There was a duffle bag, there were 50 sticks of dynamite, it was meant to kill a lot of people,” Connor said. “The Obama administration is opening a relationship with a Communist country that is still sponsoring terrorists. The thought that Cuba can be considered to not be a sponsor of terrorism while they give asylum to terrorists – it’s dismissing my father’s life.”

Morales was part of a group that was planting bombs all around New York City. He was convicted and sentenced to about 90 years, but escaped from Bellevue Hospital, where he was under police custody, by going down a rope fashioned from elastic bandages that was three stories long. The Washington Post called it “one of the most publicized [escapes] in U.S. history.”

He ended up in Mexico, which then handed him over to Cuba, where Fidel Castro, who gave sanctuary to several U.S. fugitives, welcomed him as a freedom fighter.

A Washington Post reporter caught up with him in 2002, where he was “sipping a cappuccino in a chic hotel lobby in Havana.”

“Only once I met Fidel Castro,” Morales told the Washington Post. “It was at a reception and I said to him, ‘Thank you.”

The notion of Morales and others who’ve killed people in terrorist acts in the United States living without a care and being treated as celebrities in Cuba gnaws at Connor.

“Morales has been sponsored as a guest by Cuba since 1988,” said Connor, 49. “It’s a travesty that the U.S. would even considering removing Cuba from the state sponsor of terror list.”

The most well-known fugitive in Cuba is Joanne D. Chesimard, a former member of the Black Panthers who is on the F.B.I.’s list of most wanted terrorists for killing a New Jersey state trooper in 1973. Chesimard also escaped – from prison – in 1979 and fled to Cuba, which welcomed her with open arms.

Now, U.S. officials are saying that Cuba has agreed to talks about fugitives.

Cuban government officials have not commented.

"We see the reestablishment of diplomatic relations and the reopening of an embassy in Havana as the means by which we'll be able, more effectively, to press the Cuban government on law enforcement issues such as fugitives. And Cuba has agreed to enter into a law enforcement dialogue with the United States that will work to resolve these cases," said State Department spokesman Jeff Rathke.

Still she said Tuesday night that "the Cuban government recognizes the president of the United States' just decision to take Cuba off a list in which it should never have been included."

Cuba was put on the list in 1982 because of what the U.S. said were its efforts "to promote armed revolution by organizations that used terrorism."

That included support for leftist guerrilla groups including the Revolutionary Armed Forces of Colombia and the Basque separatist movement ETA in Spain. The State Department terror list entry for Cuba also noted the protection it has given to fugitives wanted in the United States.

Connor, who was only 9 years old when his father was killed, has devoted nearly all his life to keeping his father’s death from being forgotten, and to pressing for the return of Morales. He has gone to the probationary hearings of some who remain in prison to make sure they stay behind bars.

Most of the FALN members who were part of Morales’ group were given clemency by President Bill Clinton.

“Fourteen of them got clemency and walked out of prison,” Connor said.

Often, when he is in church, he makes his father a promise. He promises not to let his death be in vain.

“Morales and FALN were Communists, Marxists, they were targeting corporate executives, people they saw as the bourgeois,” Connor said.

But that was not who his father was, he said.

Frank Connor came from an Irish immigrant family that worked at blue collar jobs in the hope that their son would have a better life.

Frank Connor went to City College, graduated from Fairleigh Dickenson, and got his job at a Wall Street bank where his mother was on the maintenance staff.

“My grandmother wanted my father to have a good, safe job,” Connor said.

Some people have told Connor to move on, to live his life.

The Cuban government has not given any indication that it will return the fugitives. The Castro regime has argued that the United States harbors Cuban exiles who have been responsible for what the Communist government says are terrorist acts against it.

Even if the regime were to promise to return the fugitives someday, Connor is skeptical.

"It's not going to happen," he said. "We're the most powerful country in the world, yet we can't negotiate. I'm not going to buy that two years down the road, these guys will be returned."

Connor said he won't stop pushing for Morales to pay for his crimes.

"He has not served in his time in prison," Connor said. "He was arrested, charged and convicted and sentenced."

It's unfathomable to him not to keep fighting for justice for his father.

"The way I view it is, my father's life and his death have been used for politics way too long."