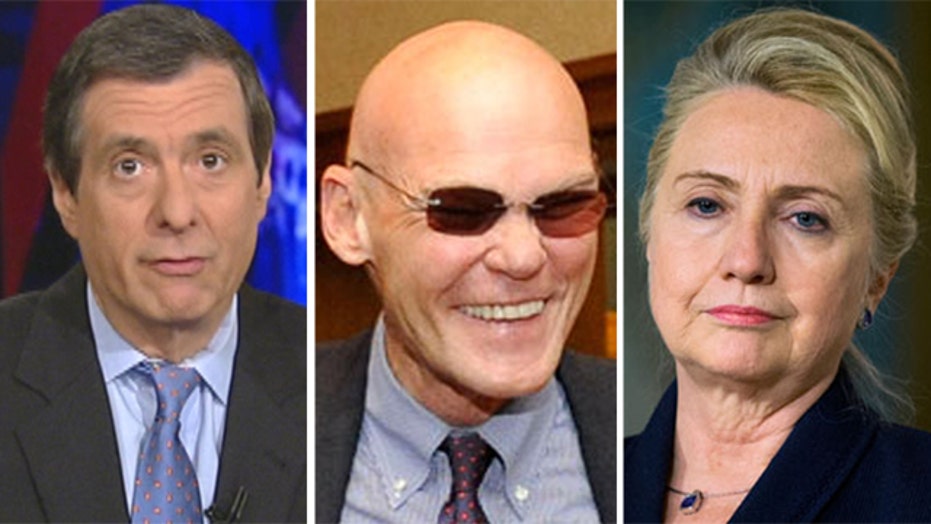 Kurtz: The Ragin' Cajun on offense

The Hillary camp is done meekly playing defense on the email debacle.

Instead, her team has unleashed attack dog James Carville to bite the media in the butt.

Carville is trying to argue that the problem isn’t Hillary, it’s a press corps that has swallowed “right-wing talking points” in pursuing the story.

Except that the story is, well, um, true.

Carville unloaded with MSNBC’s Andrea Mitchell Monday, essentially accusing journalists of being stooges for the GOP, which will come as a surprise to many people. And Mitchell repeatedly pushed back.

James is an entertaining character who I’ve covered for more than two decades, but the argument he’s trying to make for Hillaryland is insulting. And this is rather revealing of their collective attitude toward the press, since he would not freelance on something like this.

Now it’s possible, since Times reporter Michael Schmidt has been covering the House Benghazi committee, that the story emanated from the panel’s request for Hillary’s email as secretary of State. But journalists follow up leads from all kinds of partisan sources. The question is whether the story can be documented, and whatever the legalistic arguments about her not following the rules, this one has been confirmed again and again.

The Ragin’ Cajun tried to accuse the Times of having walked back the story. But that’s untrue: Public Editor Margaret Sullivan said the original piece was accurate but should have included more detail about the relevant rules and laws.

And are the rest of the media — say, the network newscasts, the Washington Post editorial page, CNN and MSNBC as well as Fox — just carrying the Republicans’ water as well?

The second part of Carville’s argument is that email controversy is part of “the same cockamamie stuff” that Hillary has faced since she was first lady, and “all about nothing.”

He ticked off Whitewater, Filegate, Travelgate, Pardongate — and threw in Benghazi for good measure.

Now this is a brazen attempt to rewrite history. The swirl of allegations around Hillary in the 1990s ranged from serious to overblown, but she clearly made mistakes and hurt herself with her penchant for secrecy. (Benghazi is so different — a tragedy even under the most favorable reading — that I’m surprised Carville threw it in.)

One reason the email mess is resonating is precisely because it reminds people (especially journalists) of past corner-cutting. That’s why there was a devastating “SNL” parody of her over the weekend. To Carville, though, it’s about the persecution of his friend.

Now there are several reports that Clinton will address the controversy in the coming days, perhaps with a news conference. I said on Megyn Kelly’s show that the ride-it-out strategy would fail, and it has. Now the thing has metastasized for a week because she let it fester, producing stories like these:

Washington Post: “Instead of a fresh chapter in which she came into her own, Clinton’s time as the country’s top diplomat now threatens to remind voters of what some people dislike about her — a tendency toward secrecy and defensiveness, along with the whiff of scandal that clouded the record of her husband, former president Bill Clinton.

“That side of Hillary Clinton also plays directly into the main Republican argument against her, that she is a candidate of ‘yesterday’ — as Sen. Marco Rubio of Florida recently put it — who comes with decades of baggage the country no longer need carry.”

New York Times: “As Mrs. Clinton commemorates her 1995 women’s rights speech in Beijing in back-to-back events in New York, she finds herself under attack for her family foundation’s acceptance of millions of dollars in donations from Middle Eastern countries known for violence against women and for denying them many basic freedoms.

“This was not how she intended to reintroduce herself to American voters.

“Mrs. Clinton’s glide path to a likely April announcement that she will seek the presidency was built around women’s issues. Advancing women has been her central life’s work, as she and her admirers say proudly; she made it a priority as secretary of state and focused on it as a philanthropist. But that focus also allowed Mrs. Clinton, who played down her gender in 2008, to frame her second attempt at the White House in what could be one way to make it special and new: as a shot at history for her and for all women.”

The media are going to report on the overwhelming Democratic front-runner every day. She can either take control of the story or have journalists fencing with surrogates like Carville, but until Hillary Clinton attempts to provide some answers, it’s not going away.