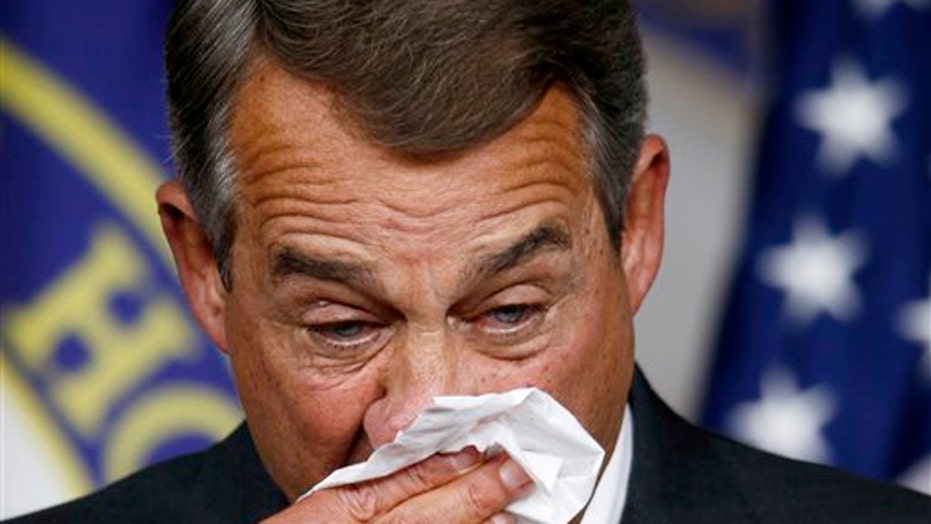 The battle among Capitol Hill Republicans to replace House Speaker John Boehner will likely unfold like the one that led to Boehner's resignation: GOP leadership vs. the party's most conservative caucus.

"Before we rush headlong into leadership elections, we need to take time to reflect on what has happened and have a serious discussion about … what we expect of our leaders, and how we plan to accomplish our goals," Illinois Rep. Peter Roskam said Saturday in a letter to fellow GOP House members.

Members of Boehner's leadership team already appear to be positioning themselves for the job of running the Republican-controlled chamber. Among them is second-in-command House Majority Leader Kevin McCarthy.

The California Republican has made no official statement, but sources tell Fox News that he is seeking the position. And Boehner said in his resignation announcement Friday that "McCarthy would be an excellent speaker."

In addition, the chamber's No. 3 Republican, House Majority Whip Louisiana Rep. Steve Scalise and Washington Rep. Cathy McMorris Rodgers are also interested in the job, according to sources. McMorris is chairwoman of the House Republican Conference and the fourth highest-ranking Republican in the House.

"I am not announcing a run for any leadership position because I currently don’t believe our conference or our leadership can be successful until we confront the underlying issues that have led to this moment."

However, ascending to the speakership will be difficult for any of them, considering the existence of the small-but-powerful number of House Republicans who repeatedly suggested Boehner and his leadership team wasn't conservative enough and tried to derail several legislative initiatives.

They most recently tried to make defunding Planned Parenthood part of a spending bill that must be passed by Wednesday to avoid a partial government shutdown. And the seemingly endless struggle between the sides appears to be a major reason why Boehner resigned.

GOP Reps. Jeb Hensarling, Texas; Pete Roskam, Illinois; and Tom Price, Georgia, are among the chamber’s most conservative members and among those mentioned as possible Boehner replacements.

Roskam lost a spot on the leadership team last year when then-House Majority Leader Eric Canton lost re-election. He was the chief deputy whip to McCarthy but lost the big whip race to Scalise, who replaced Roskam with his own chief deputy.

"This is about understanding the importance of this historic moment -- the resignation of a speaker due to internal party divisions," Roskam also wrote in the letter, while downplaying any immediate ambition to become the next speaker.

"This is not about me," he continued. "I am not announcing a run for any leadership position because I currently don’t believe our conference or our leadership can be successful until we confront the underlying issues that have led to this moment."

Also on Saturday, Texas Rep. Louie Gohmert, one the chamber’s most conservative Republicans, told Fox New: “No matter who it is, I know (the new House leaders) will be more conservative because they will let the majority rule. And that’s the way it’s supposed to work.”

New Jersey Gov. Chris Christie also didn’t endorse a replacement but suggested voters are unhappy with how Congress is being run and called for a “reset.”

“The American people are disappointed,” Christie said on Fox. “They gave our party the majority in both houses, and we have not delivered some of the things we need to deliver.”

Once Boehner officially resigns his post and leaves Congress next month, the total number of House members will be 434, including 246 Republicans. An absolute majority is required to elect a new speaker, meaning the magic number of votes that a candidate must get is 218.

An aide to Hensarling told Fox News that the lawmaker was considering his options and would expect to have a decision next week.

Among the other most-conservative members also being mentioned for the job are GOP Reps. Jim Jordan, Ohio, and Ted Yoho, Florida.

The chamber's most conservative group is the House Freedom Caucus, which unofficially has about 35 to 38 members -- including about 15 of the 25 who voted against Boehner in the speaker’s election in January, according to Roll Call and The New York Times.