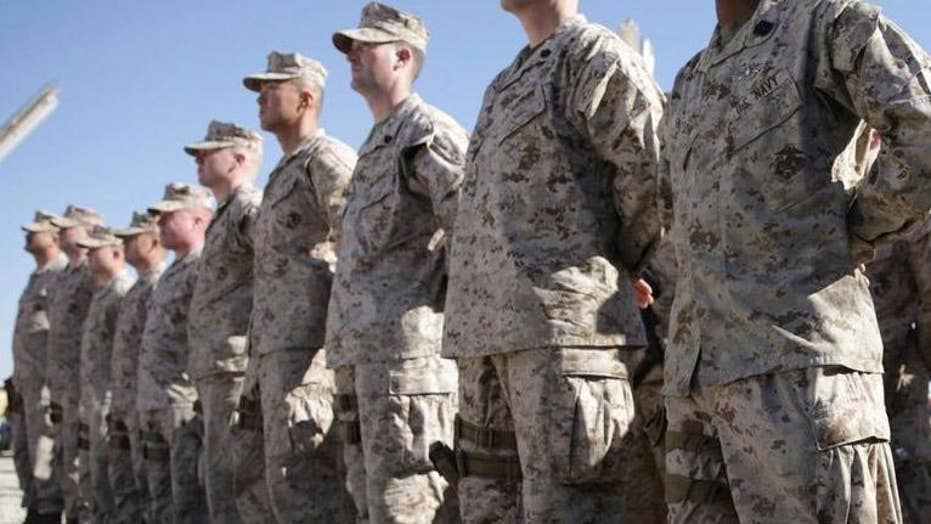 Trump moves to ban most transgender troops from serving

President Donald Trump on Friday officially authorized the ability of the Pentagon to ban transgender individuals from joining the military, with limited exceptions, following through on a pledge he made last year.

"Among other things, the policies set forth by the Secretary of Defense state that transgender persons with a history or diagnosis of gender dysphoria -- individuals who the policies state may require substantial medical treatment, including medications and surgery -- are disqualified from military service except under certain limited circumstances," a memo released by the White House on Friday night said.

Maj. David Eastburn, a Pentagon spokesman, said the announcement of a new policy would have no immediate practical effect on the military because the Pentagon is obliged to continue to recruit and retain transgender people in accordance with current law.

The Department of Justice issued a statement defending the Pentagon:

“After comprehensive study and analysis, the Secretary of Defense concluded that new policies should be adopted regarding individuals with gender dysphoria that are consistent with military effectiveness and lethality, budgetary constraints, and applicable law," the statement reads. "The Department of Justice will continue to defend DOD’s lawful authority to create and implement personnel policies they have determined are necessary to best defend our nation.

"Consistent with this new policy, we are asking the courts to lift all related preliminary injunctions in order to ensure the safety and security of the American people and the best fighting force in the world.”

But criticism came quickly from LGBT advocates and from the leadership of the Democratic Party.

"There is simply no way to spin it, the Trump-Pence Administration is going all in on its discriminatory, unconstitutional and despicable ban on transgender troops," said HRC President Chad Griffin.

The Democratic National Committee released a statement signed by Chairman Tom Perez, DNC LGBT Caucus Chair Earl Fowlkes, and DNC Treasurer Bill Derrough, whom the DNC says was prevented from serving in the military because he is openly gay.

“This decision is an insult to our brave transgender service members and all who wear our nation’s uniform," the statement reads. "Instead of fulfilling his oath to protect the American people, Donald Trump and Mike Pence are putting our nation’s security at risk and shoving real American patriots back in the closet."

President Donald Trump walks across the South Lawn of the White House in Washington, Friday, March 23, 2018, as he heads to Marine One for a short trip to Andrews Air Force Base. Trump is heading to Florida where he will spend the weekend at the Mar-a-Lago estate. (AP Photo/Susan Walsh) (Copyright 2018 The Associated Press. All rights reserved.)

House Minority Leader Nancy Pelosi, D-Calif., wrote, "This latest memorandum is the same cowardly, disgusting ban the President announced last summer. No one with the strength and bravery to serve in the U.S. military should be turned away because of who they are."

Defense Secretary Jim Mattis in February sent Trump a memorandum laying out policies that "in the exercise of his independent judgment" should be implemented by the Defense Department. The memo reads, in part:

“Based on the work of the Panel and the Department’s best military judgement, the Department of Defense concludes that there are substantial risks associated with allowing the accession and retention of individuals with a history or diagnosis of gender dysphoria and require, or have already undertaken, a course of treatment to change their gender.

"Furthermore, the Department also finds that exempting such persons from well-established mental health, physical health, and sex-based standards, which apply to all Service members, including transgender Service members without gender dysphoria, could undermine readiness, disrupt unit cohesion, and impose an unreasonable burden of the military that is mot conductive to military effectiveness and lethality."

In July, Trump tweeted that the federal government "will not accept or allow transgender individuals to serve in any capacity in the U.S. Military" - reversing a 2016 policy under President Barack Obama. The move caught the Pentagon by surprise.

"Our military must be focused on decisive and overwhelming victory and cannot be burdened with the tremendous medical costs and disruption that transgender in the military would entail," the president said at the time.

Trump's push for the ban has been blocked by several legal challenges and the Pentagon began allowing transgender recruits to seek enlistment in January.

A 2016 study by the Rand Corp. estimated that nearly 4,000 transgender troops were on active duty and in the reserves, Politico reported. But LGBT advocacy groups in the military put the figure at around 15,000, the report said.