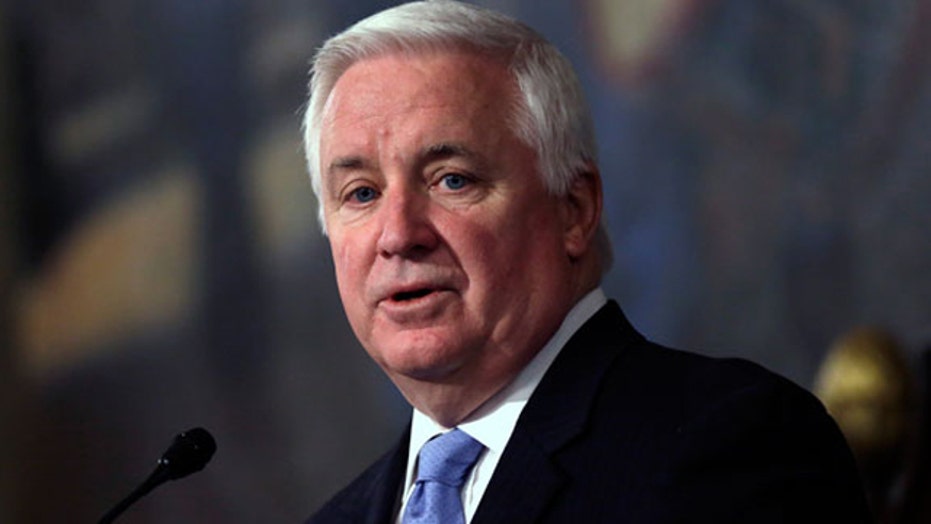 An investigation by the attorney general’s office recently found dozens of current and former state employees sent over 350 emails with sexually explicit jokes, photos and videos as well as racially charged comments using their work emails during 2008-2012. At the time, some were working under then-Attorney General Tom Corbett, who became governor in 2011.

The claims immediately became political fodder for Corbett’s Democratic rival, who at a debate on Wednesday used the controversy to question Corbett’s management ability.

“It’s a tough scandal and it couldn’t have happened at a worse time,” said Basil Smikle Jr., founder of Basil Smikle Associates and a political analyst and contributor for The Hill.

Former director of the New York Republican Party Thomas Basile told FoxNews.com he doesn’t think the email scandal is on par with an Anthony Weiner-type situation and doesn’t think the Wolf campaign will gain too much from it – but only because he’s doing well already.

“I don’t think it’s that a big of a deal for Tom Wolf that he needs to somehow pivot his campaign and try and take advantage of this. He’s running a very good campaign at this point,” he said.

Wolf’s campaign did not respond to FoxNews.com’s request for comment.

The release of the emails with just a few weeks to go before an election, though, has some wondering if there was any political motivation behind it. The current attorney general, who released them, is Kathleen Kane, a Democrat who has been in the office since 2013.

The emails were found during an investigation into how the attorney general’s office handled the Jerry Sandusky child sex abuse case.

Billy Pitman, spokesman for the Tom Corbett for Governor campaign, said the email release is a bit suspect. “The timing coupled with the fact that only information about people who work for Governor Corbett was released I find interesting,” Pitman said.

“The governor took swift action,” he added. “What is the attorney general doing to hold her own staff accountable?” He joined the governor’s office, and a state Supreme Court chief justice, who all want the full list of employees involved released.

When asked about any political motivations in releasing the emails at this time, Kane’s communications director did not provide comment.

Meanwhile, members of the Corbett administration are beginning to hand in their resignations.

Kane’s office has only released the names of eight members, even though many others are suspected to have been part of the emails. Four of those eight were still employed in the Corbett administration when the email investigation was released late last month. In the past week, two of those state officials have resigned, while two still hold their jobs. The other four are former state employees and do not work for the administration at this time. One was serving as an assistant district attorney in a country prosecutor’s office before handing in his resignation early Wednesday.

“The governor has taken the issue very seriously. He does not tolerate these kinds of actions and would not tolerate that in the workplace,” said the governor’s Press Secretary Jay Pagni, “When it was brought to light the administration we immediately contacted the Attorney General’s office to get more information.”

The two officials who resigned were Christopher Abruzzo, the environmental protection secretary, and Glenn Parno, a lawyer in the Department of Environmental Protection. Corbett said in a statement he had accepted the resignations “effective immediately.”

The third employee in question is Randy Feathers, who serves on the state Board of Probation and Parole. Pagni said the governor has called on Feathers to step down and their office is working with the legislature to facilitate his removal if it can be approved. “In the review of the emails it showed that he [Feathers] did in fact participate either by replying, forwarding, or originating emails with the objectionable content,” said Pagni. Corbett asked for Feathers’ resignation following Abruzzo’s and Parno’s, but Feathers has refused to step down.

The fourth employee identified is state police Commissioner Frank Noonan. According to Pagni, their investigation into Noonan’s activity showed he had not, “opened, forwarded, replied to, or originated any of these emails."

In a statement, Corbett said the state police commissioner needs to stay focused on a manhunt in the Pennsylvania countryside. “It is important that Commissioner Noonan remain focused on the critical public safety mission he is leading in the manhunt for Eric Frein and that there is no disruption in the work underway in this case.” Noonan has not publicly commented on the matter.

The heavily redacted emails did not show the photographs or videos that were attached but the text shows sexual comments. One email sent around had a racial slur against Arabs and another had an off-color comment about gays. Others included subject lines like, “Bikini Wax Job.”

The governor’s office and a state Supreme Court chief justice have called on Kane to release all of the information that they have, including information on current employees of the office and if any judges took part in the emails. According to the Pittsburgh Post-Gazette, the attorney general’s office has not released the information to the chief justice but he told the paper he expected to receive it later this week from Kane.

“Please don’t do this as a double standard, let’s make sure we have a complete and unbiased accounting of all of these emails and evidence of who participated and how they participated,” said Pagni.

Lauren Blanchard currently serves as a national correspondent for both FOX News Channel and FOX News Edge. She is based out of Washington D.C. and contributes to coverage across the network. She joined the network in 2011 as an intern on Special Report with Bret Baier in Washington, DC.