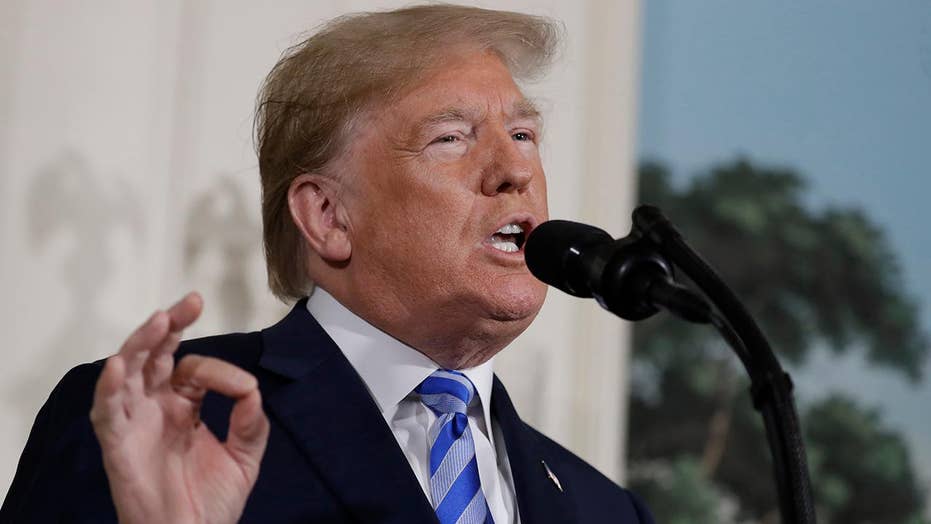 President Trump says Secretary Pompeo is heading to North Korea, has meetings set up ahead of upcoming summit.

Secretary of State Mike Pompeo arrived in Pyongyang, North Korea on Tuesday, following earlier remarks by President Trump who said he was going to the country to prepare for the upcoming meeting with leader Kim Jong Un. The president also hinted at the possible release of three American prisoners.

Pompeo is at the Koryo Hotel in the rogue nation's capital for meetings, Fox News has learned.

Trump made the surprise announcement at the White House at the same time he announced the U.S. withdrawal from the Iran nuclear deal. The visit will mark Pompeo’s second to North Korea, and Trump said that his new secretary of state had meetings scheduled.

“Plans are being made, relationships are building,” he said. “Hopefully a deal will happen and, with the help of China, South Korea and Japan, a future of great prosperity and security can be achieved for everyone.”

Pompeo confirmed his trip on Twitter, writing that he was "headed back to #DPRK at the invitation of the North Korean leadership.

"I look forward to planning a successful summit between President Trump and Kim Jong-un," he tweeted.

Trump also struck an optimistic but cautious tone, saying: “we’ll see how it all works out -- maybe it will, maybe it won’t.” He expressed similar sentiments when asked about the possible release of the prisoners.

Trump had hinted that the release of the prisoners was imminent last week, saying in a tweet: “stay tuned.” White House Press Secretary Sarah Sanders said last week that it would be seen as “a sign of good will” if North Korea released the prisoners.

Why Pompeo is the perfect fit for a North Korea deal

Tony Kim was detained at Pyongyang's airport in April 2017 and was accused of unspecified "hostile acts" against the North Korean state. He taught accounting at the Pyongyang University of Science and Technology.

Kim Hak Song, an ethnic Korean who was born in China, was detained in May 2017 and also accused of "hostile acts." He worked in agricultural development at an experimental farm run by the Pyongyang University of Science and Technology, which was founded in 2010 with donations from Christian groups.

A fourth American detainee, Otto Warmbier, died in June 2017 -- just days after he was brought back to the U.S. with severe brain damage. He had been arrested in January 2016 and accused of stealing a propaganda poster and was sentenced to 15 years in prison with hard labor.

Pompeo’s trip comes amid a rapidly moving diplomatic situation in the Korean Peninsula. Kim met with Chinese President Xi Jinping in China on Tuesday, the second meeting in recent months. Trump announced on Twitter on Tuesday morning that he was due to speak with Xi on North Korea.

During the summit, the two discussed denuclearization and declared a formal end to the Korean War. The North Korean regime has also said it will end its nuclear weapons and intercontinental ballistic missile testing program.