Police groups are criticizing a suggestion by presumptive Democratic nominee Joe Biden that cops, facing a knife-wielding attacker, should be trained to “shoot ‘em in the leg instead of the heart” – with one describing it as "misleading to the point of being deceitful."

Biden made the suggestion in an address to black community leaders in Wilmington, Del., talking about how police conduct could be changed in the wake of Floyd's death in police custody last week.

“The idea that instead of standing there and teaching a cop when there’s an unarmed person coming at ‘em with a knife or something, shoot ‘em in the leg instead of in the heart, is a very different thing,” Biden said.

“There are a lot of things that can change,” Biden said, regarding police training.

But cop groups were not impressed by Biden’s suggestion.

"Former VP Biden's remark is not just indecipherable (‘an unarmed person coming at 'em with a knife’?!), it's also misleading to the point of being deceitful,” Bill Johnson, the executive director of the National Association of Police Organizations, told Fox News in an email.

“Officers are not trained to ‘shoot somebody in the heart’ as Biden says, but rather to aim for the biggest part of the body, so as to be most likely to hit the person presenting the threat and not hit anybody else,” he said. “This always includes the condition that the officer or somebody else is in peril of death or great bodily harm, and certainly someone charging at you with a knife satisfies that requirement.”

“He’s not living in the real world because people with knives, those are deadly threats,” Federal Law Enforcement Officers Association National President Larry Cosme, told Fox News in an interview.

Cosme noted that the time officers have between drawing their weapon in the face of an attacking threat can be mere seconds and that a difficult shot in the leg might not even take someone down. He describes the unrealistic expectations of what a cops are able to do as “the CSI effect” – where non-experts get their understanding of police techniques from TV rather than reality. 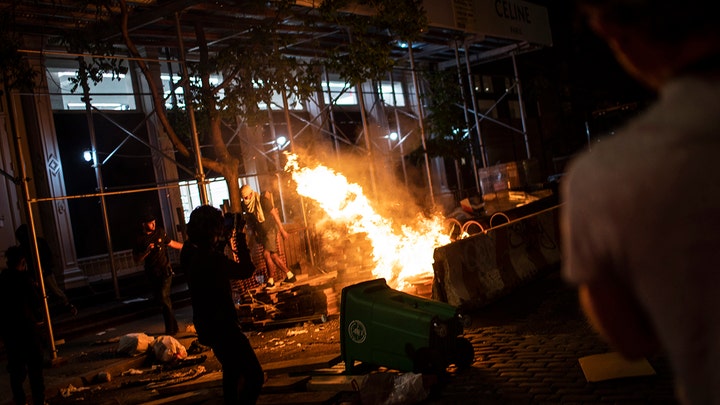 He said he knows of no law enforcement official who would recommend aiming at an extremity like a leg when facing down a deadly threat – with officers being trained instead to hit the chest as it is the largest target.

“It is a harder dynamic to execute, all officers are trained to hit center mass, you’re not trained to hit an extremity,” he said. “That is so difficult on a moving target.”

TAKING AIM AT TRUMP OVER UNREST, BIDEN ARGUES THE PRESIDENT'S 'PART OF THE PROBLEM AND ACCELERATES IT'

Johnson, meanwhile, said that Biden had missed an opportunity to communicate the difficult situations officers can find themselves in, and don’t want to be in in the first place.

“The same officer who fires his weapon is also the officer who then calls for EMT to come to the scene and save the attacker. Officers don't want the attacker dead, they want him stopped,” he said. “Biden knows this, and for him to publicly state otherwise is the worst kind of cynical pandering. He squandered an opportunity to present a difficult truth."

But should Biden win in November, the demand may be something that cops have to deal with sooner rather than later. In a speech Tuesday morning, he called on Congress to enact a series of police reforms, including creating a “model use of force standard.”

He also promised to create a national Police Oversight Commission in his first 100 days if elected, and that would include a review of police training.