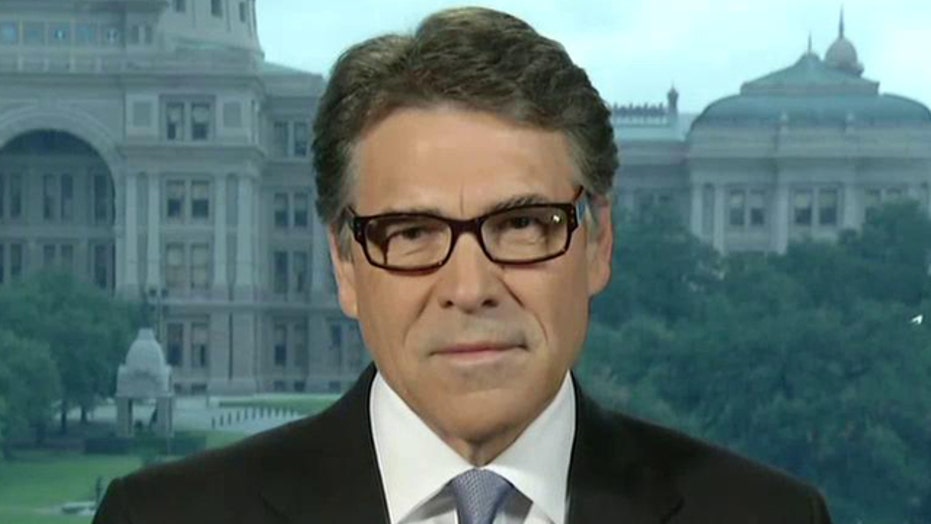 Texas Gov. Rick Perry stood behind his decision Sunday to veto giving money to a state agency run by a prosecutor with legal problems, despite an indictment saying he abused his official powers, and ramped up his criticism of the official.

Perry told “Fox News Sunday” that he would make the same decision again, as he has said repeatedly. And he urged Americans to look at a video of the prosecutor, Travis County District Attorney Rosemary Lehmberg, being arrested and jailed for driving while intoxicated.

“The highest-ranking prosecutor in Travis County was stopped for driving while drunk almost three times over the legal limit,” the Republican governor said. “She was abusing law officials. She had to be restrained.”

Perry, a 2012 GOP presidential candidate and potential 2016 candidate, has already said the indictment filed Friday is a “farce” and on Sunday suggested, as supporters have, that the case is politically motivated.

“That’s not the way we settle political differences in this country,” Perry said. “We settle [them] at the ballot box.”

The indictment alleges Perry abused his power by vowing to veto $7.5 million in state funds for the public-integrity agency run by Lehmberg, after she pleaded guilty to the April 2013 drunken-driving charge and didn’t resign.

Perry vetoed the money after Lehmberg, a Democrat, refused to resign.

"Unless he was demonstrably trying to scrap the ethics unit for other than his stated reason, Perry indictment seems pretty sketchy," Axelrod tweeted.

Perry also downplayed his 2016 presidential aspirations, including several recent trips to Iowa, by suggesting he has gone there largely to help GOP Senate candidate Joni Ernst.

Perry was indicted by an Austin grand jury on felony counts of abuse of official capacity and coercion of a public servant. The maximum punishment on the first charge is five to 99 years in prison, and two to 10 years on the second.

The indictment comes toward the end of Perry’s final term in office. In office since 2000 and already the longest-serving governor in Texas history, Perry isn't seeking re-election in November.

Lehmberg served about half of her 45-day jail sentence but stayed in office, despite Perry's assertions that her behavior was inappropriate. The jail video led to an investigation of Lehmberg by a separate grand jury, which decided she should not be removed for official misconduct.