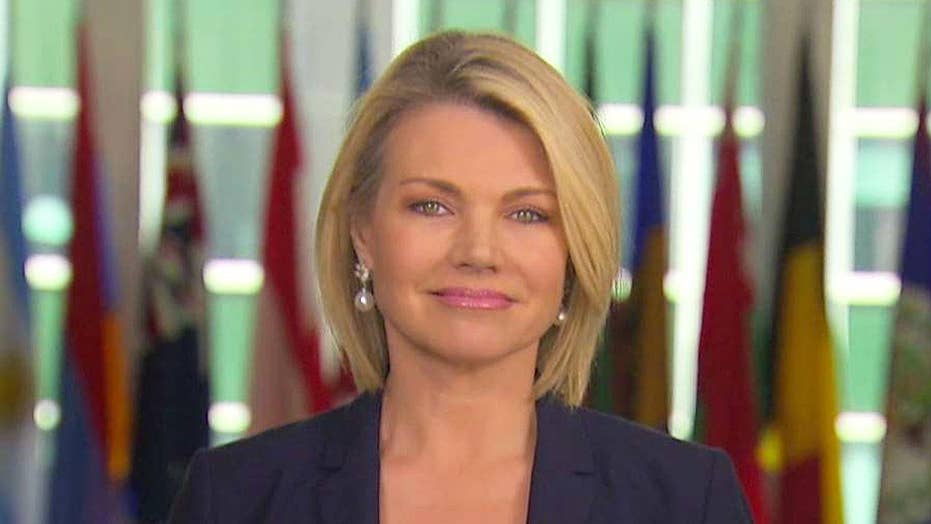 State Department acting under secretary for public diplomacy Heather Nauert discusses the U.S. mission in Syria and what steps the Syrian regime could take to begin to rebuild.

“I think we dealt them a severe blow,” Lt. Gen. Kenneth McKenzie, director of the Joint Chiefs of Staff, said at the Pentagon after the overnight bombing. “We’ve attacked the heart of the Syrians’ chemical weapons program.”

McKenzie identified the targets as Barzah Research and Development, the Him Shinshar Chemical Weapons Storage Site and the Him Shinshar Bunker Facility. He also said a total 105 missiles were launched by air and sea, all hitting their targets within minutes.

The strikes, in Douma, near Damascus, were launched in response to evidence that the Assad regime killed civilians in an April 7 chemical attack, the latest in country’s years-long civil war.

President Trump on Saturday hailed the strikes and thanked U.S. allies for joining in the campaign.

"A perfectly executed strike last night,” he tweeted. “Thank you to France and the United Kingdom for their wisdom and the power of their fine Military. Could not have had a better result. Mission Accomplished!"

ISI Image Sat International shared satellite images with Fox News, showing the Barzah Research and Development Center before and after the airstrikes. The "before" photo on the left is from August 2013, while the "after" photo on the right was taken Saturday. The images reveal crushing damage to structures at the target site.

The image on the left was taken in August 2013, while the right was taken Saturday. (ISI ImageSat International)

McKenzie, a Marine Corps general, said he has no reports of civilian casualties following the U.S.-led strikes and that the attacks overnight Friday were launched from U.S., France and United Kingdom aircraft and ships, including those in the Persian Gulf, Red Sea and eastern Mediterranean Sea.

And he suggested that Syria still likely has some capability to make chemical weapons, despite the success of the attack.

“I would say there's still a residual element,” he said. “I'm not going to say they'll be unable to conduct a chemical attack in the future. I suspect, however, they'll think long and hard about it based on the activities of last night.”

Pentagon spokeswoman Dana White said: “It’s intolerable for a civilized nation to use chemical weapons. … This is a regime that murders its people daily.”

White also said the United States is “very confident” that the Assad regime was behind the chemical weapons attack on civilians.

Pentagon officials said the allied forces’ attack was met with no resistance.

"I think the mission was a few things," Heather Nauert, acting under secretary of state for Public Diplomacy and Public Affairs, on Saturday told Fox News' "America's News HQ." "One, to show the world that the use of chemical weapons and the killing of innocent civilians will not be tolerated.

In the Persian Gulf, another destroyer, USS Higgins, fired launched 23.

Last year the United States alone launched a missile attack on the regime over its use of chemical weapons. This time the allied effort included a French frigate launching missiles and French and British fighter jets.

A pair of US Air Force B-1 bombers flying from Qatar under fighter escort launched 19 stand-off missiles.

The Russians and Syrians claimed they shot down dozens of these missiles, but the Pentagon says the Russian guns remained silent during the attack.

Syria fired roughly 40 missiles wildly into the air, after the U.S. and allied missiles had already landed, McKenzie said.

“The Syrian response was remarkably ineffective in all domains,” the general also said. “That's probably the best answer I can give you. So they had no material impact on the strike.”

The Russian disinformation campaign continues. White said there has been a 2,000 increase in Russian trolls on the internet, telling a different story than what reporters just heard at the Pentagon.