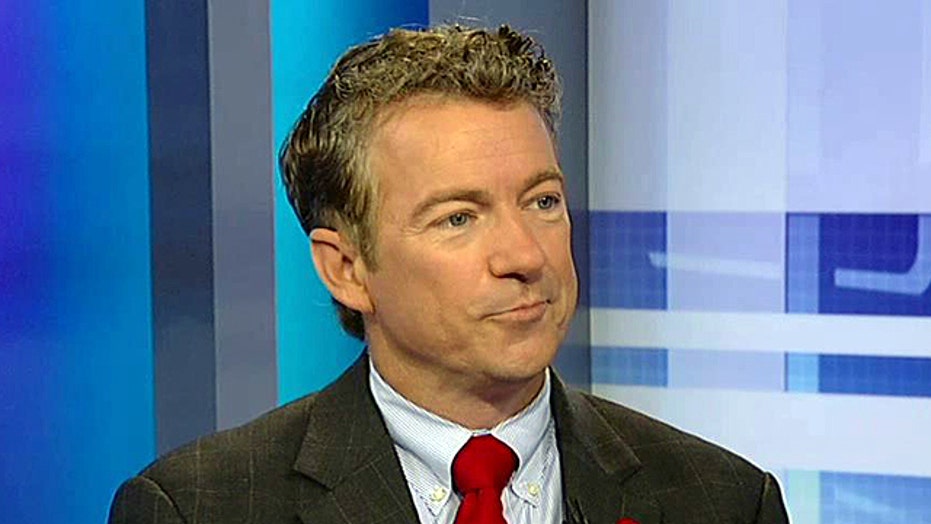 Kentucky senator says he has a personal reason to believe there are stick hiccups in the ObamaCare websites. Plus, he previews his meeting with Pres. Obama over NSA surveillance

Sen. Rand Paul, R-Ky., poked a hole Sunday in the argument that the ObamaCare rollout is on the upswing and that Kentucky’s state-run program is a model of excellence, saying it mistakenly issued his son a Medicaid card.

Paul -- a doctor who left the medical profession to join Congress in 2010 and whose base Senate salary is $174,000 -- says he makes enough money that he doesn’t need Medicaid, which helps low-income families.

Nevertheless, the Kentucky exchange put his son into the Medicaid program after Paul went online to register him for ObamaCare, he said.

“I actually tried to get my son signed up through the Kentucky exchange, you know, that the Democrats have said is so good,” Paul told ABC’s “This Week,” while holding up what appeared to be Medicaid card. “We didn't try to get him Medicaid. I'm trying to pay for his insurance. But they automatically enrolled him in Medicaid.”

Paul, who has been a sharp critic of ObamaCare, said officials wouldn’t talk to him or other members of his family because they were unsure about whether his son existed.

“He had to go down to the welfare office, prove his existence,” Paul said. “Then the next thing we know, we get a Medicaid card.”

Paul said he remains unsure whether anybody in his family is enrolled, with the sign-up date to get ObamaCare insurance starting Jan. 1 having come and gone.

“I'm uncertain now whether I'm enrolled in D.C. and/or Kentucky,” he said. “And it's a mess. I keep getting an error code every time I go in [to the state web site]. It will not let me edit my policy to try to make sure that my family is covered. … This is an unfolding disaster that I don't think gets better any time soon.”

He suggested the experience shows most of the people in Kentucky are automatically being enrolled in Medicaid.

The District of Columbia and 25 states, including Kentucky, among the country’s poorest, have taken the option to expand Medicaid under ObamaCare.

The Kentucky site sputtered on the Oct. 1 rollout date. But fixes have resulted in roughly a fifth of the state’s uninsured population enrolling in ObamaCare and about 75 percent of enrollees signing up under Medicaid, official said in late December.