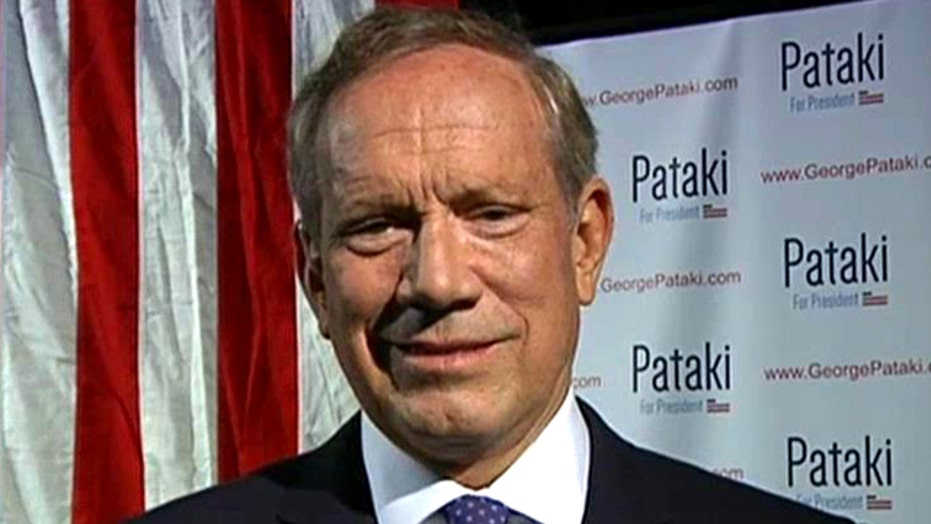 George Pataki on Fox News: I am running for president

Former New York Gov. George Pataki, announcing Thursday that he'll seek the Republican nomination for president in 2016, told Fox News that he would authorize American "boots on the ground" to go after Islamic State targets in Iraq.

The former Republican governor weighed in on a debate that has divided the party. Pataki insisted he does not want to see a "trillion-dollar, decade-long war," but said the U.S. cannot allow ISIS to have "recruiting" and "training" centers.

"If necessary, we will send in American boots on the ground to destroy those training centers, destroy those planning centers and then get out," he said. The U.S. has more than 3,000 troops in Iraq to train and equip Iraqi forces, but they are not technically in a combat role.

Pataki, meanwhile, pledged to run on a "reform agenda" as he joins a crowded field seeking the GOP nomination in 2016.

"My whole life has prepared me for this moment," Pataki told Fox News. "I am running."

Pataki formally announced his campaign shortly afterward at a rally in Exeter, N.H., which served as the state capital during the Revolutionary War and claims to be the birthplace of the Republican Party. "Let the next decade be the decade where America proves to the world, you ain't seen nothing yet," Pataki told the crowd.

In announcing his White House bid, Pataki's campaign also posted a three-and-a-half-minute video to its website featuring an anti-big government message, "Washington has grown too big, too powerful, too expensive, and too intrusive." The video highlighted Pataki's role as governor of New York following the Sept. 11, 2001, terror attacks.

"We have always understood that we have a common background and a common destiny, and when we stand together, we can accomplish anything," Pataki said in the video. "I saw that on the streets of New York in the days and weeks after September 11."

Pataki is the eighth Republican candidate to announce his run for the White House, and does so one day after former Pennsylvania Sen. Rick Santorum launched his second presidential campaign.

Pataki, 69, has worked as a lawyer and opened a consulting firm since leaving office in 2006. He's been a frequent visitor to the early nominating states of Iowa and New Hampshire over the years, and has made more than half a dozen trips to New Hampshire this year alone as he explored a 2016 campaign. His earlier efforts never resulted in a full-fledged campaign, however.

Clearly a longshot, Pataki has cited his electoral success in a heavily Democratic state -- he knocked off liberal icon Mario Cuomo to become governor in 1994 -- and ability to work with Democrats as among his strengths. But he's spent recent months promoting his conservative credentials, as those running for the Republican nomination invariably do.

In an earlier trip to New Hampshire, he campaigned against President Obama's health care law, criticized Obama's executive order to offer protections against deportation to millions of immigrants living in the country illegally, and said the nation can't afford another Democratic president.

Speaking with Fox News, Pataki said he knows how to "put together a coalition" and said the Republican nominee will have to appeal to independents, conservative Democrats, young voters, minority voters and more.

Pataki served as governor from 1995 through 2006. The lengthy tenure was the pinnacle of a long career in politics that began with a run for mayor in his hometown of Peekskill. He won in 1981, and served two terms before going on to the New York State Assembly, then the State Senate, where he served one term.

He rode a national Republican wave into the governor's mansion in 1994, and was held in high esteem as a fiscal conservative who was able to win the top office in a traditionally blue state. But his positions on gun control, gay rights and global warming created a schism with his more socially conservative supporters, and some fiscal conservatives were still underwhelmed by his economic policies during his years as governor.

Nonetheless, he has taken a populist, small-government tone in recent television appearances and PAC commercials.