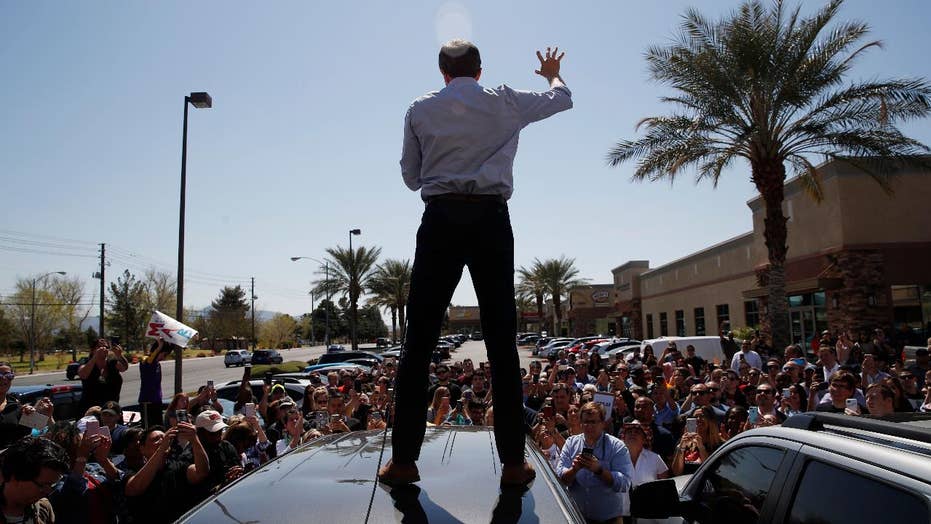 Former Rep. Beto O’Rourke of Texas announced Wednesday that he raised $9.4 million in the first 18 days of his Democratic presidential campaign.

O’Rourke’s campaign cash figure pales in comparison to the $18.2 million reported a day earlier by Sen. Bernie Sanders for the first quarter of the year. And it lags behind the $12 million reported by Sen. Kamala Harris of California.

But O’Rourke brought in his total in just 18 days -- from the mid-March launch of his presidential campaign until the end of the first quarter of fundraising on March 31. Sanders, the independent from Vermont who in February announced his second straight bid for the White House, hauled in his total over 41 days. And Harris, who declared her candidacy in January, raised her money over a 70-day period.

"In just 18 days, people in every state and from every walk of life have organized in homes, contributed a few bucks online and united together to show that the power of people is far greater than the PACs, corporations and special interest that have captured, corrupted and corroded our democracy for far too long," O’Rourke said in a statement.

And he touted that the fundraising figures were a “sign of our grassroots strength during the first two weeks of our campaign.”

Nearly two-thirds of the money O'Rourke reported was raised in his first day as a candidate. He grabbed headlines in mid-March after announcing that he brought in an eye-popping $6.1 million in the 24 hours after he officially launched his campaign.

After announcing his White House bid last month, O’Rouke was showered with heavy media attention as he quickly crisscrossed the campaign trail in the early voting primary and caucus states of Iowa, New Hampshire, South Carolina and Nevada.

South Bend, Indiana Mayor Pete Buttigieg was the first 2020 Democratic contender to announce first-quarter campaign cash numbers. His $7 million haul was further evidence that the one-time long shot for the nomination was rising in stature and strength.

The campaigns have until April 15 to file their fundraising reports with the Federal Election Commission.