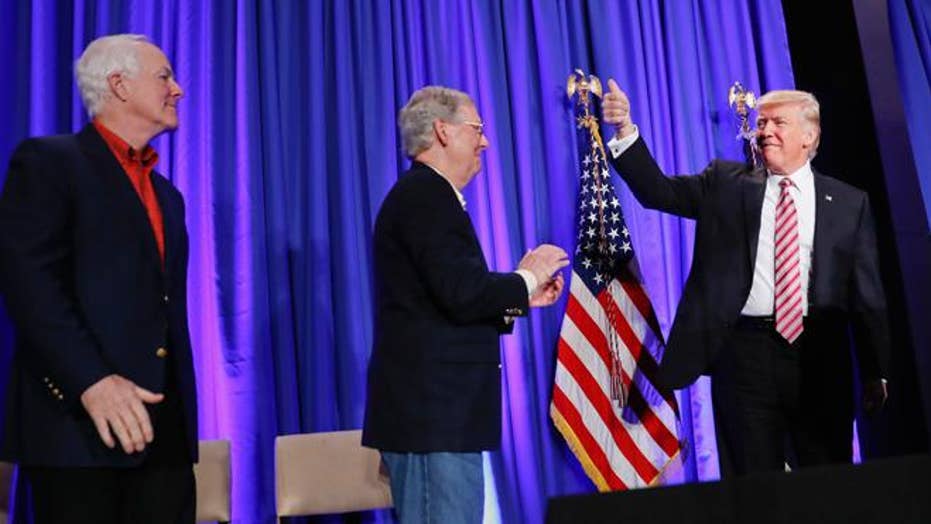 What could be on the GOP retreat agenda?

Strategy Room: Christopher Hale and Kevin McCullough weigh in on key issues that could be discussed at the upcoming GOP retreat

Law enforcement officials have interviewed the interloper who managed to slip into the congressional Republican retreat in downtown Philadelphia last week and are considering charges, Fox News has learned. Sources identified her as Philadelphia reporter Emily Guendelsberger.

Officials from the Secret Service, U.S. Capitol Police and Philadelphia police conducted the interview on Wednesday, Fox News is told, though she apparently has obtained a lawyer and did not answer questions.

Fox News is told authorities are now looking at charging her with some form of trespassing.

Guendelsberger was questioned, sources said, after posing as a congressional spouse and sneaking into the retreat, which featured presentations by President Trump, Vice President Pence, British Prime Minister Theresa May and scores of lawmakers.

The host site Loews Hotel in Philadelphia was locked down during the retreat, preventing even journalists from entering, relegating them to across the street. But sources said Guendelsberger used a fake congressional ID to make it in, though she did not have an official spouse pin issued to significant others of members.

It’s not clear if Guendelsberger posed a threat to lawmakers. The Congressional Institute, which sponsored the high-profile forum, said that an intruder “misrepresented” themselves and was later evicted from the meetings.

Another question is who made a covert recording of a high-level meeting on health care. The audio of the meeting was anonymously leaked to the New York Times and Washington Post.

It is not clear if the interloper was responsible for the recording, but sources told Fox News that authorities are leaning toward that presumption. Fox News is told authorities also are examining potential wiretapping charges for Guendelsberger.