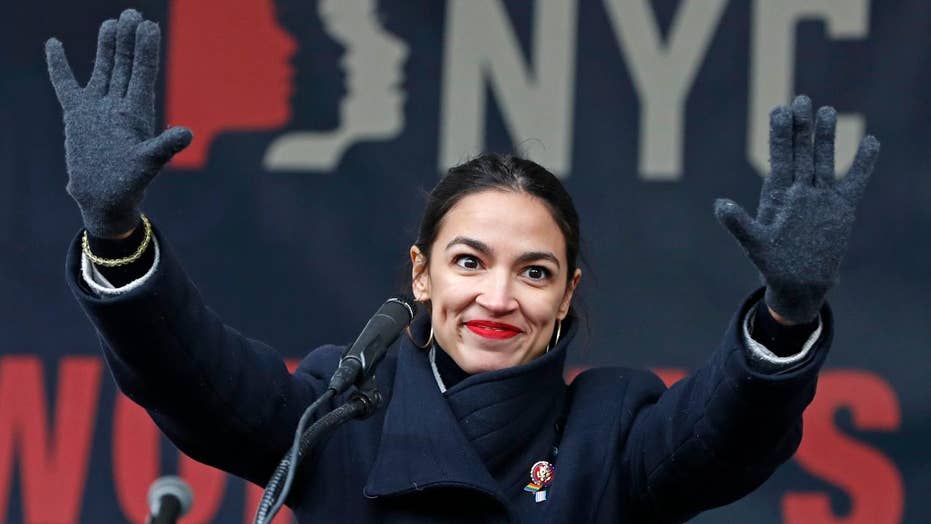 Is the Green New Deal more than a climate change initiative?

U.S. Rep. Alexandria Ocasio-Cortez, D-N.Y., blasted congressional Republicans on Saturday for seeking a “bluff” vote on her proposed Green New Deal -- a move that other Democrats have also derided as a political stunt.

“The GOP’s whole game of wasting votes in Congress to target others ‘on the record’, for leg [legislation] they have no intent to pass, is a disgrace,” Ocasio-Cortez tweeted. “Stop wasting the American peoples’ time + learn to govern. Our jobs aren’t for campaigning, & that’s exactly what these bluff-votes are for.”

The freshman Democrat has touted the Green New Deal as an effort to rid the U.S. of greenhouse gas emissions while generating millions of high-paying jobs. Ocasio-Cortez has called climate change a "generational" issue, describing it as "our World War II" for younger people.

Republicans have mocked the ambitious plan as socialism and cite its price tag that could reach into the trillions of dollars.

It has almost no shot of passing in the Senate, where it would need 60 votes to advance. Senate Majority Leader Mitch McConnell, R-Ky., has scheduled a procedural vote on the plan for Monday, when senators will return after a one-week recess.

The legislation exists as a nonbinding resolution, which would not require the government to do anything. Democrats have yet to deliver details on how to implement the plan or pay for it.

By pushing for a vote, McConnell hopes to see how far Democrats are willing to go to align themselves with the party’s new progressive wing.

“Just a good old-fashioned, state-planned economy. Garden-variety 20th-century socialism,” McConnell said in a recent speech. “Our Democratic colleagues have taken all the debunked philosophies of the last hundred years, rolled them into one giant package, and thrown a little ‘green’ paint on them to make them look new.”

“Our Democratic colleagues have taken all the debunked philosophies of the last hundred years, rolled them into one giant package, and thrown a little ‘green’ paint on them to make them look new.”

Some Democrats said they plan to vote “present” on the resolution to signal their opposition to what they call a “sham” vote that seeks to quash public debate by blocking public hearings or expert testimony about the consequences of climate change.

In response to her tweet, some on social media mocked Ocasio-Cortez for being upset that her proposed legislation will get a vote.

“Seems odd to introduce legislation with lots of fanfare if you don’t want it to receive a vote?,” one user wrote.

“This has to be the first time a sitting congressperson has ever advocated for NOT holding a vote on their own ideas,” another tweeted in response.

“Someone seems weirdly upset that the Senate will be voting on their plan," another wrote.

“If planet is in a crisis and this serious proposal (totally not a stunt!) is the only plan to save it, you would think @AOC wd be: 1) thanking McConnell for scheduling a vote & 2) working to get votes to pass it. In fact, shouldn’t she be mad at Pelosi for not doing the same?,” one user tweeted.