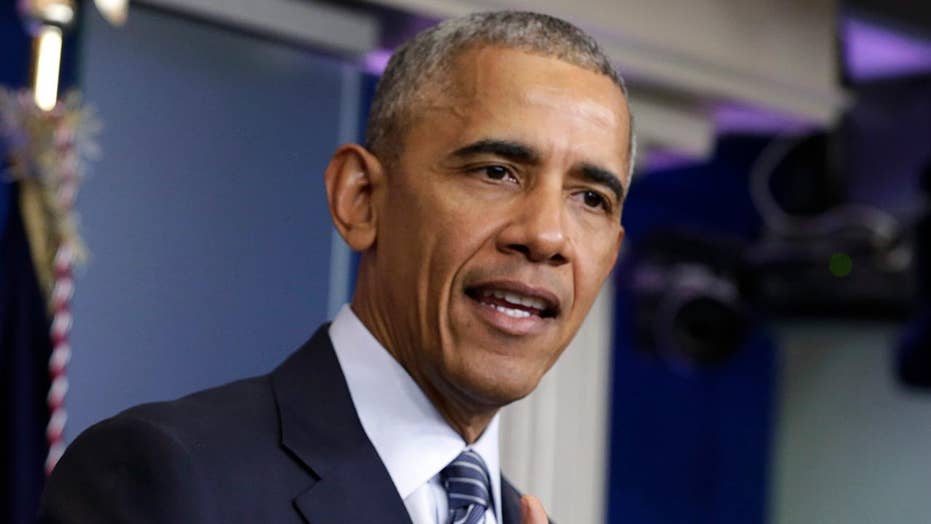 Obama gave $9.2B to UN, linked groups in last year in office

EXCLUSIVE: In its last year in office, the Obama Administration showered at least some $9.2 billion on the United Nations and its sprawling array of organizations, according to a document recently posted on the State Department website.

The total is gleaned from a document that summarizes U.S. government spending for international organizations, and is  about 20 per cent higher than the $7.7 billion figure  given out by State for 2010, before the Obama Administration abruptly quit providing any overall tally for its U.N. support.

The overall U.S. bill for international organizations of every stripe is just under $10.5 billion, meaning that U.N. organizations absorb about 88 per cent of such U.S. government spending.

The new tally includes nearly $360 million for  the controversial United Nations Relief and Works Agency for Palestine Refugees in the Near East, or UNRWA, which is regularly accused of inculcating violent anti-Israel attitudes and even abetting  terrorist attacks on Israel, which it strongly denies.

(Last week, the Trump Administration froze a last-minute, $221 million donation by the Obama Administration that was intended for the Palestinian Authority.)

The UNRWA numbers, along with all the rest of the U.N. donations, are likely to come under fierce scrutiny in the weeks ahead, both from the Trump Administration, which wants to take a tough look at aligning its U.N. spending with national interests, and from Congress, which is frustrated  by U.N. bloat and inefficiency, and often maddened by its anti-Israel biases.

At the same time, U.N. appeals for funds, especially humanitarian money to deal with a swamp of international crises and conflicts, are still on the rise. On Jan. 31, for example, UNICEF announced a new, $3.4 billion appeal, including $1.4 billion slated for Syria and surrounding countries, that the agency says will target some 535 million children next year.

But from a U.S. point of view, “there is a new sheriff in town,” noted Robert Wexler, a former Democratic congressman from Florida and a U.N. supporter who testified on Feb. 1 , along with some sharp U.N. critics, before a subcommittee hearing of the House Foreign Relations Committee.

The hearing focused on the U.N.’s anti-Israel biases, and specifically on UNRWA, whose recent alleged misdeeds were laid out in detail by Hillel Neuer, executive director of the Geneva-based U.N. Watch, who told the legislators that “the U.S. Congress is the one reliable force that can hold the U.N. to account.”

That is, if the figures they see can be believed. Critics are already noting that the State Department figures for U.N. support are less than the full story-- at least $500 million in contributions to the U.N.-sponsored Green Climate Fund, which Congress had opposed, are missing—and State itself admits that “not all Executive Branch agencies provided information for inclusion in this report.”

“This report was probably put together in hurried fashion,” observes Brett Schaefer, an expert on U.N. funding at the conservative Heritage Foundation.  He  notes that its appearance was likely prompted by a congressional spending resolution last December that demanded such figures once again be made public.

The State Department website now includes similarly disorganized spending numbers  for 2015—when overall spending on international organizations hit $10.8 billion—and links to more organized reports on spending that stretch back to  2007.

Pulling exact totals out of the State Department paperwork is a daunting task, as it does not separate U.N. organizations and other international organizations that the U.S. voluntarily  and involuntarily  funds. In some cases, getting the numbers also involves analyzing ostensibly non-U.N. grants where the money is then returned, via partnerships, to U.N. organizations.

The tallies, however, are virtually guaranteed never to match with their U.N. equivalents. The State Department figures cover the government’s fiscal year:  October 1, 2015 to September 30, 2016. U.N. Secretariat  biennial budgets run from January 1 to December 31 each year. U.N. annual peacekeeping budgets are prepared on a cycle from  July 1 to June 30. Other U.N. organizations may also vary.

Thus, for 2014—the latest year covered on a U.N. website for its top inter-agency coordinating body—total U.S. contributions to the U.N. alone are tallied at $10.067 billion.

The State Department report for fiscal 2014 lists total U.S. contributions to all international organizations at about $7.4 billion.

The U.S. spent about $2.6 billion on U.N. peacekeeping in fiscal 2016, according to the State Department. That would be 32.7 percent of the $7.9 billion U.N. peacekeeping budget for July 2016 to June 30 2017—much more than the 28.57 per cent it is assessed for its peacekeeping “dues,” and which many U.S. legislators already consider greatly excessive.

Whatever the truth of the numbers, all of that money is  likely to come under the skeptical microscope of  the Trump Administration, which is contemplating a tough review of any U.N. spending that it deems outside the national interest—including  steep cuts to “voluntary” funding beyond U.S. dues-paying minimums.

UNRWA in particular may face harsh scrutiny. A foretaste was provided at the Feb. 1  subcommittee hearing, where UN Watch in particular singled out the agency in a 130-page report entitled Poisoning Palestinian Children.

The UN Watch document cites more than 40 Facebook pages that it claims were “operated by school teachers, principals and other employees” of UNRWA, which it charges “incite to terrorism or anti-Semitism.” UNRWA has vigorously denied such charges in the past.

UN Watch director Neuer claimed before the legislators that the UNRWA indictment was only part of a “vast infrastructure the U.N. has constructed to demonize Israel.”

There are plenty of other targets in the State Department tallies. To name one: $67.9 million was spent in 2016 for the United Nations Population Fund, which has become an automatic piñata when pro-life Republican Administrations are in power, and the opposite under Democrats.

In 2010, the Obama Administration gave the Population Fund $51.4 million, according to the State Department, which means the figure has been boosted by nearly a third.

But two years earlier, the number was zero. And in his first week in office, President Trump announced restoration of the so-called Mexico City Policy for global health assistance that cuts U.S. funding for non-government organizations that offer abortion counselling or advocate for abortion rights in foreign countries. Like most U.N. organizations, the Population Fund is dependent on local organizations to carry out its family planning work.

The fuel for many other impassioned battles can be seen in the State Department numbes. In 2010, for example, the International Organization for Migration, devoted to “humane and orderly migration,”  got $272.8 million from the U.S.

In 2016, now a full-fledged U.N. agency, it got $477.2 million, much of it in response to the Syria crisis—upheaval which, in turn, has helped prompt a rethinking of immigration policies by the Trump Administration.