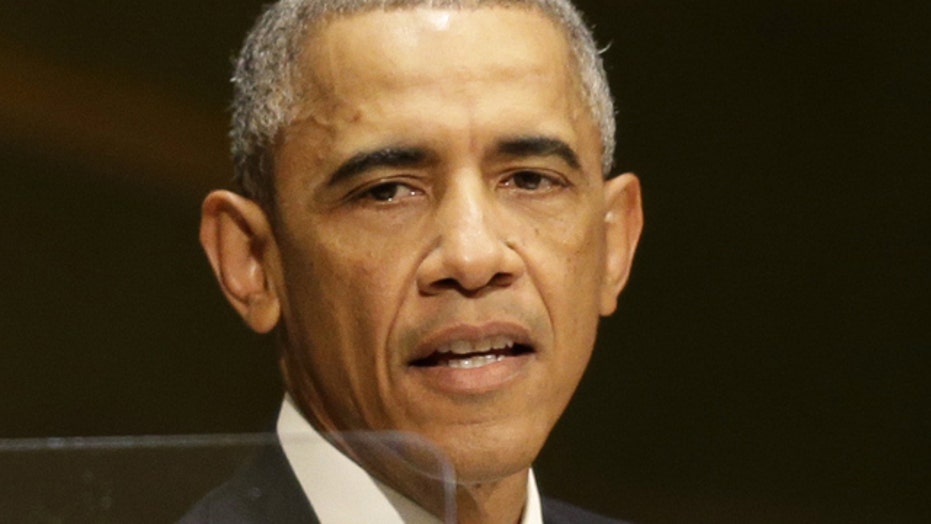 Obama: Cancer of violent extremism could derail our progress

President Obama, assuming again the role of war-time president, used a United Nations address on Wednesday to urge broad international support in confronting the Islamic State and other terror groups -- while repeating his 2009 pledge that the U.S. is not "at war with Islam."

Speaking as the U.S. launches an expanded military campaign against the Islamic State, Obama said nations are staring into the "heart of darkness" with the violence in Iraq and Syria driven by the terror group. He urged nations to "reject the cancer of violent extremism," and said defeating the Islamic State, or ISIS, is the first step.

"The only language understood by killers like this is the language of force. So the United States of America will work with a broad coalition to dismantle this network of death," Obama declared. The president said over 40 nations have offered to join the coalition and added: "Today, I ask the world to join in this effort."

At the same time, Obama stressed the important role that Muslim communities can play in rejecting extremist ideology. Regarding Syria's civil war, he again said the only solution to that country's bloodshed is a "political" one.

And, repeating a line he delivered during a 2009 address in Turkey shortly after taking office, he said America is not "at war with Islam."

"When it comes to America and Islam, there is no us and them -- there is only us," Obama said, while stressing that "America will not base our entire foreign policy on reacting to terrorism."

The tone of the address underscored the complicated situation Obama finds himself in, after running for office six years ago in part on staunch opposition to the Iraq war and as the foreign policy antithesis of George W. Bush. The president has since committed the nation to a fight against the Islamic State that military advisers say could last years -- but, stressing the differences in this war, Obama is vowing not to "occupy" other countries and to leave fighting on the ground to U.S.-trained foreign forces.

Obama spoke two days after the U.S. and Arab allies launched a barrage of airstrikes in Syria against Islamic State and other targets.

The strikes continued on Wednesday, with the Pentagon reporting the U.S. conducted two more airstrikes on an Islamic State staging area in eastern Syria. Rear Adm. John Kirby said the target was an area used by the militants to move equipment across the border into Iraq.

In the Syria operation, Bahrain, Saudi Arabia, Jordan and the United Arab Emirates joined the U.S. earlier this week in carrying out airstrikes, while Qatar played a supporting role.

The airstrikes were not only aimed at ISIS, but also an Al Qaeda-linked terror cell called The Khorasan Group, which the Pentagon said was nearing the "execution phase" of a direct attack on the U.S. or Europe.

Obama addressed a range of topics beyond Middle East terrorism in his speech to the U.N. General Assembly. He touched on the Ebola crisis in West Africa and also repeatedly condemned Russia's actions in the conflict in eastern Ukraine.

"We will impose a cost on Russia," Obama said. So far, those costs largely have come in the form of sanctions, and the Obama administration has not agreed to Ukrainian pleas for military aid.

Meanwhile, the British parliament is expected to be recalled Friday to discuss a possible role for the U.K. in airstrikes against ISIS. The BBC reported that Iraqi Prime Minister Haider al-Abadi will formally request that Britain join in the campaign. Both al-Abadi and his British counterpart, David Cameron, are in New York this week for the U.N. General Assembly.

Cameron told NBC News Tuesday evening that the fight against ISIS was a battle "you cannot opt out of.

"It has oil, it has money, it has territory, it has weapons, and there's no doubt in my mind it has already undertaken and is planning further plots in Europe and elsewhere," Cameron said.

The BBC reported that any British involvement against ISIS would be limited to Iraq, but not Syria due to concerns raised by the opposition Labour Party. That party's leader, Ed Miliband, told the BBC that any proposed airstrikes against ISIS in Syria would need to be backed by a U.N. Security Council resolution. Such a prospect is unlikely due to the influence of Russia, which holds a veto on the council and has roundly criticized this week's U.S.-led airstrikes.

Obama was scheduled to meet with al-Abadi following his General Assembly speech.

On Wednesday afternoon, Obama also convened an unusual meeting of the U.N. Security Council, during which members unanimously adopted a resolution that would require all countries to prevent the recruitment and transport of would-be foreign fighters preparing to join terrorist groups such as the Islamic State group.

However, Obama administration officials have acknowledged that U.N. resolutions can be notoriously difficult to enforce.

While Obama faces pressure from some Democratic lawmakers to limit U.S. involvement in the new fight, others are pressuring him to keep the door open to using U.S. ground troops. "We and our partners will ultimately need a limited presence of troops on the ground-not to invade and occupy Syria or Iraq, but to advise local forces, direct air strikes, gather intelligence, and conduct special forces operations, among other related missions," Sens. John McCain, R-Ariz., and Lindsey Graham, R-S.C., said in a joint statement.

Early Wednesday, Syrian activists told the Associated Press that aircraft had conducted at least 10 airstrikes on suspected ISIS targets near the border with Iraq -- though the Pentagon referred only to two.

The BBC, also citing activists, reported airstrikes around the town of Kobane, near the border with Turkey. Witnesses said that they saw two military aircraft approach the area from the direction of Turkey, but officials from that country denied that their airspace or bases were used in any attack.