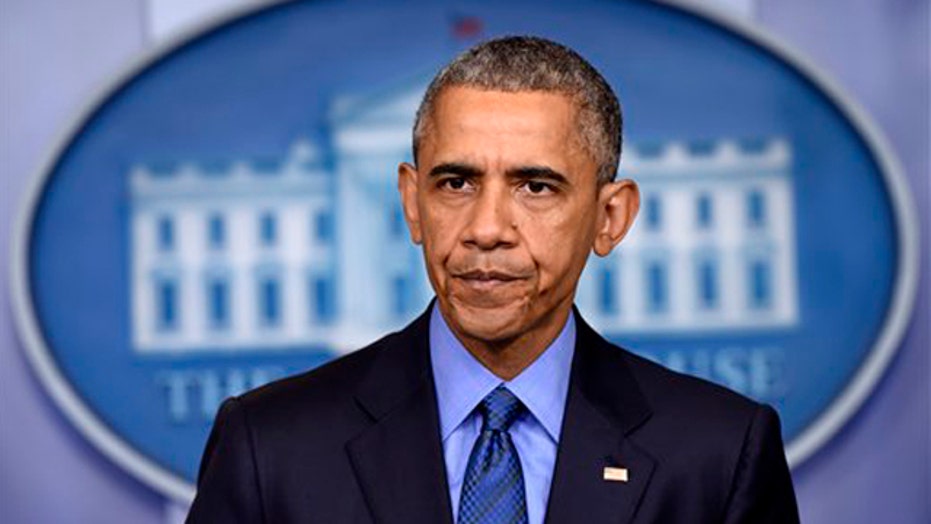 Obama: This type of mass violence doesn't happen in other advanced countries

WASHINGTON – President Obama on Thursday voiced "heartache" and "anger" over the South Carolina church shooting that left nine people dead, in forceful remarks that spoke not only to America’s racial history but also its debate over gun violence and gun control.

“To say our thoughts and prayers are with them and their families and their community doesn't say enough to convey the heartache and the sadness and the anger that we feel,” Obama said of the Charleston community.

Obama said he and Vice President Biden both spoke with Charleston Mayor Joseph Riley to express condolences. He added that he and first lady Michelle Obama knew several parishioners at the Charleston church, including the church’s pastor, state Sen. Clementa Pinckney, who was among those killed.

Though he said now was the time for healing Obama cautioned, “Let’s be clear. At some point as a country, we have to reckon with the fact that this type of mass violence does not happen in other advanced countries.”

The president’s comments come on the heels of Attorney General Loretta Lynch’s announcement that the Department of Justice would investigate the Charleston murders as a hate crime.

“Acts like this one have no place in our country and no place in a civilized society,” she said.

The department's Civil Rights Division will work with the FBI and local U.S. Attorney's Office, as part of an investigation parallel with the state's, she said.

FBI hate crime data shows that more than 50 out of every 1 million black citizens has been the victim of a racially-motivated hate crime in 2012 – the highest among any racial group in the United States.

“We woke up today, and the heart and soul of South Carolina was broken,” she said at a news conference. “So we have some grieving to do. And we have some pain to go through.”

At times choking back tears, the Republican governor said “parents are having to explain to their kids how they can go to church and feel safe, and that’s not something we ever thought we’d have to deal with.”

The victims were six females and three males, Police Chief Greg Mullen said. The suspect, Dylann Roof, has been arrested. He reportedly attended a meeting at the 180-year-old Emanuel African Methodist Episcopal Church in downtown Charleston Wednesday night, stayed an hour and then went on a killing spree, Mullen said.

In a statement, NAACP President and CEO Cornell William Brooks condemned the shooting, saying “there is no greater coward than a criminal who enters a house of God and slaughters innocent people engaged in the study of scripture.”

The attack came two months after the fatal shooting of Walter Scott, an unarmed black man by a white police officer in neighboring North Charleston, which sparked protests and shed light on racial tensions in the southern city.

“We believe this is a hate crime; that is how we are investigating it,” Charleston Police Chief Greg Mullen, said.