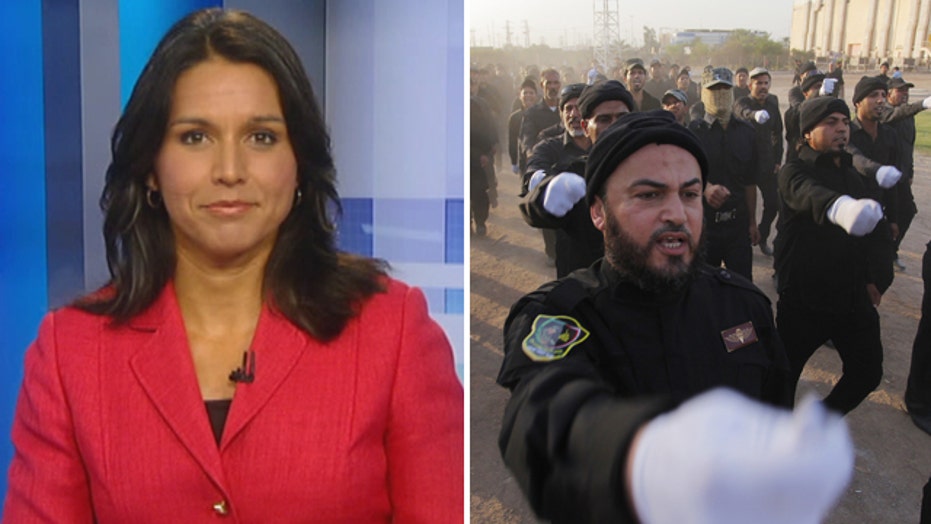 Advisers, not combat troops, the right move in Iraq?

President Obama responded to the growing sectarian violence in Iraq by announcing Thursday that he's dispatching Secretary of State John Kerry for talks in the Middle East and Europe -- and is preparing to send up to 300 military advisers to aid the Iraqi military.

The president, holding back on more aggressive measures such as airstrikes, addressed the crisis in Iraq and the U.S. response after meeting for hours with his national security team. Speaking in the White House briefing room, he also touched on the controversial topic of whether the U.S. should work with Iran to counter militants next door -- saying Iran can play a "constructive role" if they join the U.S. in calling for the Iraqi government to be inclusive, but would worsen the situation if the Shiite regime's only interest is in shoring up fellow Shiite fighters.

The president repeatedly stressed that U.S. combat troops would not engage in the Iraq conflict. "Ultimately, this is something that's going to have to be solved by the Iraqis," Obama said.

But, citing concerns about the situation spiraling into an "all-out civil war," Obama said he's prepared to send a "small number" -- up to 300 -- of additional military advisers to train and advise Iraqi security forces, and set up "joint operation centers" in Baghdad and elsewhere. The president said the U.S. already has "significantly increased" intelligence and surveillance to better understand what Sunni militants with the Islamic State of Iraq and Syria are doing.

The president also stressed the diplomatic track, saying Kerry would leave this weekend for meetings with allies in the Middle East and Europe.

"The United States will lead a diplomatic effort to work with Iraqi leaders and the countries in the region to support stability in Iraq," Obama said.

Rep. Ed Royce, R-Calif., House Foreign Affairs Committee chairman, said these steps are all "needed" but urged the president to do much more, including drone strikes. "The plan that the president announced today in response to the rapid terrorist expansion in Iraq underestimates the seriousness of the threat," he said in a statement.

Obama addressed the public as lawmakers on Capitol Hill were getting impatient with his administration's response. Several senior members took to the floor of the Senate to blast the president's policies earlier Thursday.

"These recent events ... are not intelligence failures. They are policy and leadership failures," Sen. Saxby Chambliss, R-Ga., said on the floor, claiming the president's Middle East policy has "totally unraveled."

Sen. Lindsey Graham, R-S.C., blamed the decision to withdraw entirely from Iraq for the current quagmire.

"You've seen a collapse of the Iraqi Army that I think could have been prevented," Graham said.

The back-to-back string of speeches on the floor were the latest show of pressure from congressional lawmakers aimed at getting the administration, broadly, to reconsider its foreign policies and, specifically, to get more involved in protecting the Baghdad government from Sunni Muslim militants sweeping across the country's north.

House Speaker John Boehner, R-Ohio, also told reporters Thursday that terrorism has "increased exponentially" under this administration. "You look at this presidency, and you can't help but get the sense that the wheels are coming off," Boehner said. The president met Wednesday afternoon in the Oval Office with the top four congressional leaders, including Boehner.

When coupled with previously announced steps, Obama's actions Thursday could put about 600 additional U.S. troops back on the ground in Iraq. The 300 military advisers he announced Thursday would join up to 275 being positioned in and around Iraq to provide security and support for the U.S. Embassy in Baghdad and other American interests.

While weighing military options, the administration is also urging the Iraqi government to be more inclusive. Obama warned Thursday that there is no "simple military solution to this issue."

Though Obama did not make such a call on Thursday, the Obama administration also is weighing whether to press the Shiite prime minister in Baghdad to step down in a last-ditch effort to prevent disgruntled Sunnis from igniting a civil war.

More so than airstrikes or other American military action, top U.S. officials believe that giving more credence to Sunni concerns about Prime Minister Nouri al-Maliki can stave off another deadly round of sectarian fighting of the kind that engulfed Iraq less than a decade ago.

Vice President Joe Biden spoke with the Iraqi leader Wednesday and emphasized the need for him to govern in an inclusive manner. Biden also spoke to Iraq's Sunni parliamentary speaker and the president of Iraq's self-ruled northern Kurdish region.

Al-Maliki, who has long faced criticism for not making his government more inclusive, went on a diplomatic offensive Wednesday, reaching out in a televised address to try to regain support from the nation's disaffected Sunnis and Kurds. His conciliatory words, coupled with a vow to teach the militants a "lesson," came as almost all Iraq's main communities have been drawn into a spasm of violence not seen since the dark days of sectarian killings nearly a decade ago.

Iraq's government, though, has asked the U.S. to launch airstrikes to contain the fast-moving militant group that has seized Mosul, Tikrit and other towns in Iraq as the country's military melted away. U.S. officials say Obama has been weighing that request, but strikes have not been the focus of his deliberations.

Obama's decision-making on airstrikes has been complicated by intelligence gaps that resulted from the U.S. military withdrawal from Iraq in late 2011, which left the country largely off-limits to American operatives. Intelligence agencies are now trying to close gaps and identify possible targets that include insurgent encampments, training camps, weapons caches and other stationary supplies, according to U.S. officials.