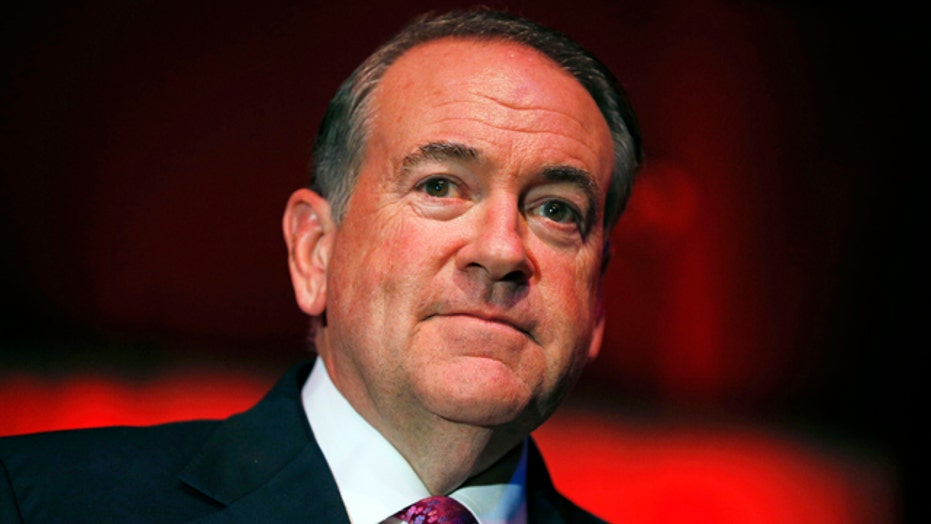 Republican Mike Huckabee drew a rebuke from President Obama on Monday for invoking the Holocaust in his criticism of the Iran nuclear deal -- marking a rare, long-distance clash between the sitting president and the field of Republicans vying to replace him.

Speaking at a press conference during his visit to Ethiopia, Obama said the comments from the GOP White House contender were part of a "pattern" of remarks from candidates that "would be considered ridiculous if it weren't so sad."

Huckabee has faced broad criticism after likening the nuclear deal to "marching the Israelis to the door of the oven," a reference to the Holocaust.

The former Arkansas governor included the statement in a tweet Sunday, a day after first making the comparison.

"This president's foreign policy is the most feckless in American history," Huckabee said in an interview with Breitbart News that was broadcast on Sirius/XM radio Saturday. "He's so naive he would trust the Iranians and he would take the Israelis and basically march them to the door of the oven."

Asked late Monday during an appearance on Fox News' "The Five" if he would apologize, Huckabee responded, "I will not apologize. I will not recant."

He said he was "absolutely" standing by his comments, adding "last time the world didn't take seriously the threats...we ended up seeing 6 million Jews murdered."

But a Huckabee spokeswoman said Sunday his comments reflect a longstanding position that "the Iran deal is a bad deal, bad for America and bad for Israel." Huckabee's tweet called on Congress to reject the nuclear deal.

Huckabee also sent out several tweets in defense of his statements, quoting Ayatollah Khamenei and others regarding plans to target Israel.

Obama, in Africa, suggested the tough rhetoric was a ploy by Huckabee to "get attention" or to push Trump out of the headlines.

He also accused the candidates of violating a time-honored American tradition of not playing "fast and loose" on topics of grave concern like foreign policy. He said regardless of which party wins the White House, he wants to ensure he's turning over the keys to someone capable of seriousness, decorum and honesty.

"We have robust debates, we look at the facts," Obama said. "We just don't fling out ad hominem attacks like that because it doesn't help inform the American people."

Reacting to Trump's comments on McCain's war record, Obama said Trump "challenged the heroism of Mr. McCain, somebody who endured torture and conducted himself with exemplary patriotism." Trump, whose poll numbers are on the rise, has emerged as a growing source of concern in the Republican Party because of his provocative comments about immigrants and his GOP rivals, which some Republicans say could hurt the party's prospects in 2016.

Obama also singled out Cruz, the Texas senator, for suggesting in the wake of the nuclear deal that Obama -- not Iran -- is the leading state sponsor of terrorism.

The Anti-Defamation League (ADL) also criticized Huckabee for his remarks. National Director Jonathan A. Greenblatt said they were "completely out of line and unacceptable."