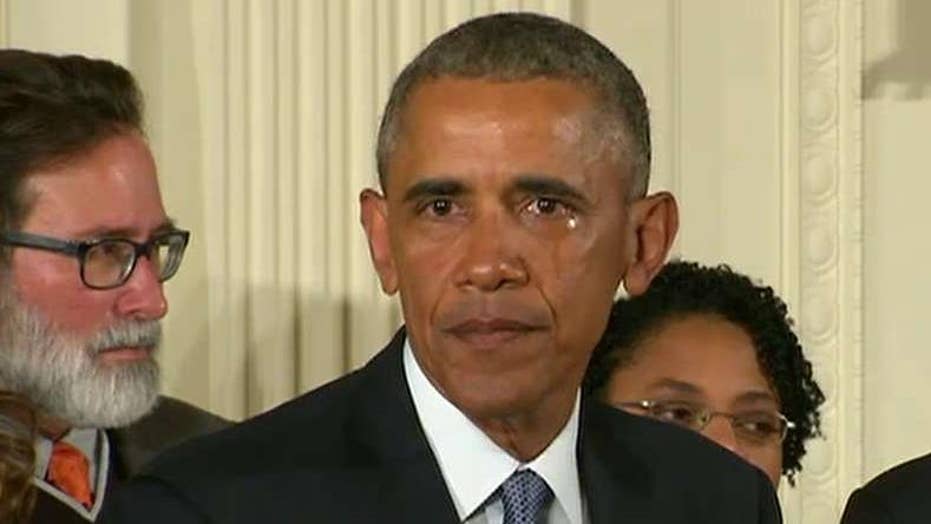 A closer look at president's executive action on gun control

President Obama announced plans Tuesday to expand background checks to almost anyone buying a firearm from a dealer and make other gun rule changes via executive action -- bypassing Congress and fueling an election-year fight with Republicans.

“Everybody should have to abide by the same rules,” Obama said.

The president, speaking at the White House, said background checks "make a difference" and will be expanded so that they can cover purchases online, at gun shows and in other venues. This would put the onus on most sellers to get a license and conduct the checks.

“Anybody in the business of selling firearms must get a license and conduct background checks or be subject to criminal prosecutions,” he said. Obama was flanked by victims of gun violence and introduced by Mark Barden, whose son was killed in the Sandy Hook mass shooting.

At the heart of Obama's plan is a more sweeping definition of gun dealers that the administration hopes will expand the number of gun sales subject to background checks. At gun shows, websites and flea markets, sellers often skirt that requirement by declining to register as licensed dealers, but officials said the new federal guidance clarifies that it applies to anyone "in the business" of selling firearms.

The changes were first detailed by the White House overnight, and mark a renewed bid by the president to enact gun control measures with or without Congress.

They don’t go as far as proposed background check legislation – which has failed to advance on Capitol Hill – but nevertheless have prompted allegations of executive overreach.

"No matter what President Obama says, his word does not trump the Second Amendment. We will conduct vigilant oversight,” House Speaker Paul Ryan, R-Wis., said, adding that the actions “will no doubt be challenged in the courts.”

Obama, blasting the gun lobby and appearing to choke up as he discussed gun violence victims, rejected claims that he is infringing on the Second Amendment, citing other restrictions that can constitutionally apply to freedom of speech and other rights.

But Republicans said the changes would only hurt law-abiding Americans.

“He knows full well that the law already says that people who make their living selling firearms must be licensed, regardless of venue. Still, rather than focus on criminals and terrorists, he goes after the most law-abiding of citizens,” Ryan said in a statement.

“This executive order is just one more way to make it harder for law-abiding people to buy weapons or to be able to protect their families,” Florida Sen. Marco Rubio, a GOP presidential candidate, told Fox News.

The guidance, at its heart, aims to achieve a long-time administration goal of at least narrowing the so-called gun show loophole.

Under current law, only federally licensed gun dealers must conduct background checks on buyers, but many who sell guns at flea markets, on websites or in other informal settings don't register as dealers. The ATF has issued updated guidance that says the government can consider someone a gun dealer regardless of where the guns are sold.

The administration also said ATF is finalizing a rule to require checks for people buying certain weapons through a trust, corporation or other “legal entity.”

In an attempt to prevent gun purchases from falling through the cracks, the FBI will hire 230 more examiners to process background checks, the White House said.

In advance of the announcement, the president asserted he has the “legal authority” to act here. The president finalized the plan after meeting Monday with Attorney General Loretta Lynch, FBI Director James Comey and other top officials.

“The recommendations that are being made by my team here are ones that are entirely consistent with the Second Amendment,” Obama said Monday, claiming they could “potentially save lives.”

The revived push to tighten America’s gun laws via executive action, however, has resulted in a backlash on Capitol Hill and the campaign trail.

Republicans made clear they would fight the administration and accused the president of overstepping.

Rep. John Culberson, R-Texas, who chairs a key appropriations panel, warned Lynch on Monday that he would “use every tool at my disposal to immediately restrict” DOJ funding if the department proceeds with “new restrictions on our Constitutional rights.”

"I will veto that. I will un-sign that so fast," Trump said Saturday at a campaign rally in Biloxi, Miss.

"We definitely think there are things he can do," said Dan Gross, president of the Brady Campaign to Prevent Gun Violence, which advocates for expanding background checks. Gross says his recent conversations with White House aides have left him hopeful.

"It's very clear that the White House is feeling emboldened," he said.

On Thursday, Obama will take his argument to prime time, participating in a town hall discussion of gun violence on CNN. He's slated to make his case for changes in his State of the Union address on Jan. 12.

The high-profile rollout reflects a White House continuing to look for ways to wrap up unfinished business despite an uncooperative Congress.

After all but ignoring the issue in his first term, Obama changed course after the mass shooting at Sandy Hook Elementary in December 2012. Nevertheless, the president failed to push a package of gun measures through Congress, including one expanding background checks.

At the same time, Obama took nearly two dozen executive actions to tighten gun laws, but left a major expansion of background checks out of the mix.

But after the shooting at a community college in Roseburg, Ore. in October, Obama ordered his staff to redouble the effort to look for ways to work around Congress.

The background check provision rests in the murky realm of agency "guidelines," which carry less weight than formally issued federal regulations and can easily be rescinded. Lynch said the administration chose to clarify guidelines because it allowed the policies to be implemented immediately. Left unsaid was the fact that developing regulations would have dragged out likely until Obama's presidency ends and would have generated more opportunities for Republicans to intervene.

The new guidance still exempts collectors and gun hobbyists, and the exact definition of who must register as a dealer and conduct background checks remains exceedingly vague.