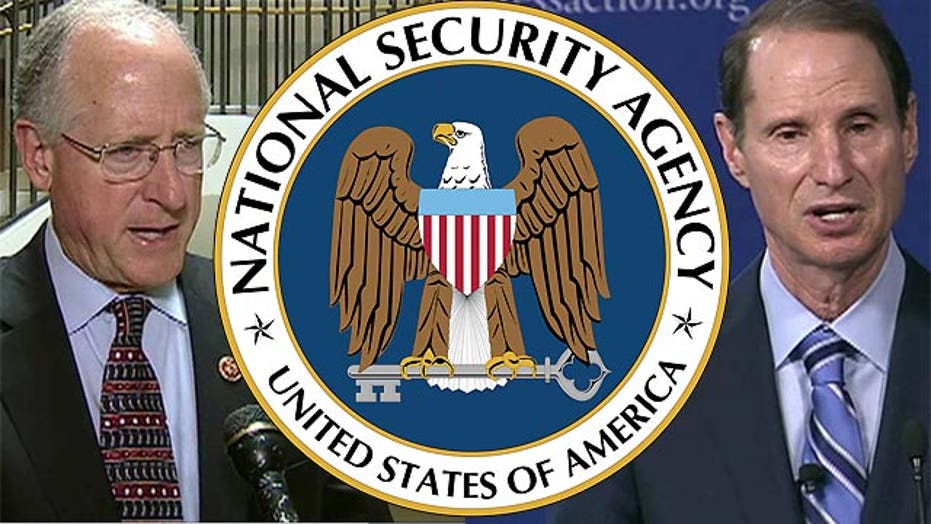 Debate over future of NSA surveillance on Capitol Hill

Lawmakers react to plans for program

The White House is raising the alarm over a congressional effort to terminate the government's authority to collect phone records of millions of Americans in an amendment attached to a $598.3 million defense spending bill.

The proposition to end the National Security Agency's authority under the USA Patriot Act would prevent the secretive surveillance agency from collecting records unless an individual is under investigation, and has exposed sharp divisions among members of Congress.

"We oppose the current effort in the House to hastily dismantle one of our Intelligence Community's counterterrorism tools," White House spokesman Jay Carney said in a late-night statement. "This blunt approach is not the product of an informed, open or deliberative process."

Additionally, in an unusual, last-minute lobbying move, the administration dispatched Gen. Keith Alexander, head of the NSA, to Capitol Hill to urge lawmakers to oppose the amendment in separate, closed-door sessions with Republicans and Democrats.

Carney said President Obama is still open to addressing privacy concerns in the wake of documents leaked last month by former NSA systems analyst Edward Snowden that revealed that the vast nature of the agency's phone and Internet surveillance. But he said Obama wants an approach that properly weighs what intelligence tools best keep America safe.

In another sign the White House was treating the measure with serious concern, its rebuke came directly from the press secretary, rather than the more routine notices from Obama's budget office the White House normally uses to weigh in on pending legislation.

The proposal offered by Rep. Justin Amash, R-Mich., dovetails with another amendment to the defense bill to cut off funds for the NSA. The House is likely to vote on the amendments Wednesday.

The fierce debate over privacy and national security has divided Congress, transcending the partisan lines that typically characterize legislative fights -- especially in the House.

Tea party conservatives and liberal Democrats have backed the amendments, joined by libertarians like Amash who have expressed serious concerns about the government's surveillance. But national security hawks have strongly defended the programs, as have House leaders such as Speaker John Boehner, R-Ohio, and House Intelligence Committee Chairman Mike Rogers, R-Mich.

In the Democratic-controlled Senate, the leaders of the Senate Intelligence Committee have opposed the amendments, arguing that the surveillance programs have helped disrupt numerous attempted terrorist attacks.

"Any amendments to defund the program on appropriations bills would be unwise," Sens. Dianne Feinstein, D-Calif., chairwoman of the panel, and Saxby Chambliss of Georgia, its top Republican, said in a statement Tuesday.

Despite its insistence the NSA's authority should be preserved, the White House said Obama welcomes discussions with Americans and Congress about the proper balance between national security and privacy. But civil liberties advocates have said that sentiment is insufficient and hypocritical, pointing out that such a discussion would have been impossible if the programs hadn't been exposed by Snowden, who now faces felony charges.

Alexander made the Tuesday trip to ask lawmakers to reject the amendments at the request of the heads of the House Intelligence Committee, Rogers and Rep. C.A. Dutch Ruppersberger, D-Md. The two also warned in a statement that ending the program's authority would put the nation at risk of another terrorist attack.

The defense spending bill would provide the Pentagon with $512.5 billion for weapons, personnel, aircraft and ships plus $85.8 billion for the war in Afghanistan for the fiscal year beginning Oct. 1.

The bill is $5.1 billion below current spending and has drawn a veto threat from the White House, which argues that it would force the administration to cut education, health research and other domestic programs to boost spending for the Pentagon.

In a leap of faith, the bill assumes that Congress and the administration will resolve the automatic, across-the-board spending cuts that have forced the Pentagon to furlough workers and cut back on training. The bill projects spending in the next fiscal year at $28.1 billion above the so-called sequester level.