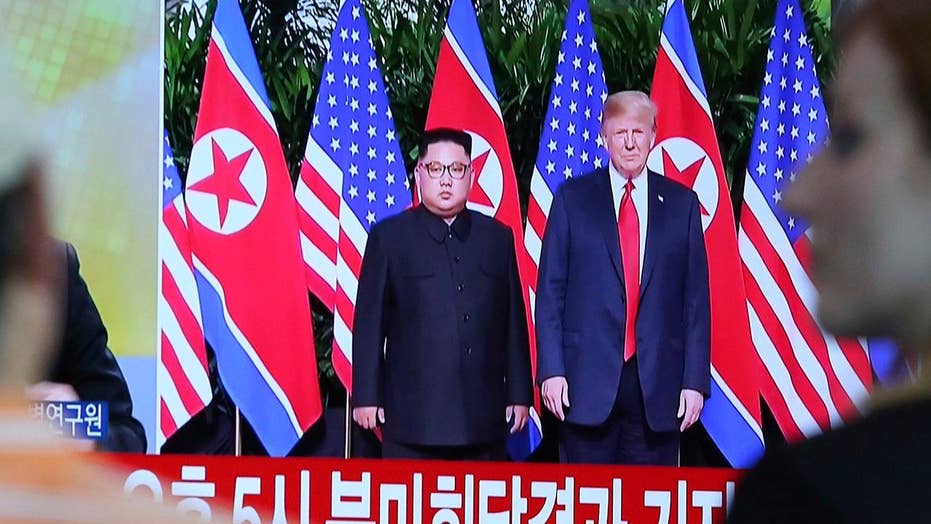 North Korean state media claimed in a glowing announcement Tuesday that President Trump and dictator Kim Jong Un invited one another to their respective countries during their landmark summit in Singapore.

There was no immediate response from the White House.

A report on the meeting by the Korean Central News Agency (KCNA) said, "Kim Jong Un invited Trump to visit Pyongyang at a convenient time and Trump invited Kim Jong Un to visit the U.S."

It went on: "The two top leaders gladly accepted each other's invitation, convinced that it would serve as another important occasion for improved [North Korea]-U.S. relations."

At a news conference after Kim departed Singapore, Trump had raised the prospect of a potential visit to Pyongyang.

Trump and Kim concluded their meeting with an agreement to work toward a denuclearized Korean Peninsula, although the timeline and tactics were left unclear. Trump later promised to end "war games" with ally South Korea, a concession to Kim that appeared to catch the Pentagon and Seoul's government off guard and sowed confusion among Republicans in Washington.

The Singapore accord largely amounted to an agreement to continue discussions, echoing previous public statements and commitments. It did not, for instance, include an agreement to take steps toward ending the Korean War, which technically is still ongoing.

Nor did it detail plans for North Korea to demolish a missile engine testing site, a concession Trump said he'd won, or Trump's promise to end military exercises in South Korea while negotiations between the U.S. and North Korea continued. Trump cast that decision as a cost-saving measure, but also called the exercises "inappropriate" amid the talks. North Korea has long objected to the drills as a security threat.

The KCNA report stated that Kim Jong Un "said that it is urgent to make bold decision on halting irritating and hostile military actions against each other.

"Expressing his understanding of it," the report continued, "Trump expressed his intention to halt the U.S.-South Korea joint military exercises, which the [North Korea] side regards as provocation, over a period of good-will dialogue between [North Korea] and the U.S., offer security guarantees to [North Korea] and lift sanctions against it along with advance in improving the mutual relationship through dialogue and negotiation."

The U.S. has stationed combat troops in South Korea since the 1950s and has used them in a variety of drills. The next scheduled major exercise, involving tens of thousands of troops, normally is held in August.

The Pentagon said Tuesday it was consulting with the White House and others, but was silent on whether the August exercise would proceed. Mattis' chief spokeswoman, Dana W. White, told reporters the defense secretary was "in full alignment" with Trump.

Lawmakers, too, were looking for details. Republicans emerged from a meeting with Vice President Mike Pence wanting more information on which exercises were on hold. Colorado Sen. Cory Gardner said Pence told them small-scale exercises would continue, but "war games will not." Pence's spokeswoman later denied that comment.

"There will be certain exercises that will continue." Gardner told The Associated Press, adding he hoped "there's further clarification what that means."