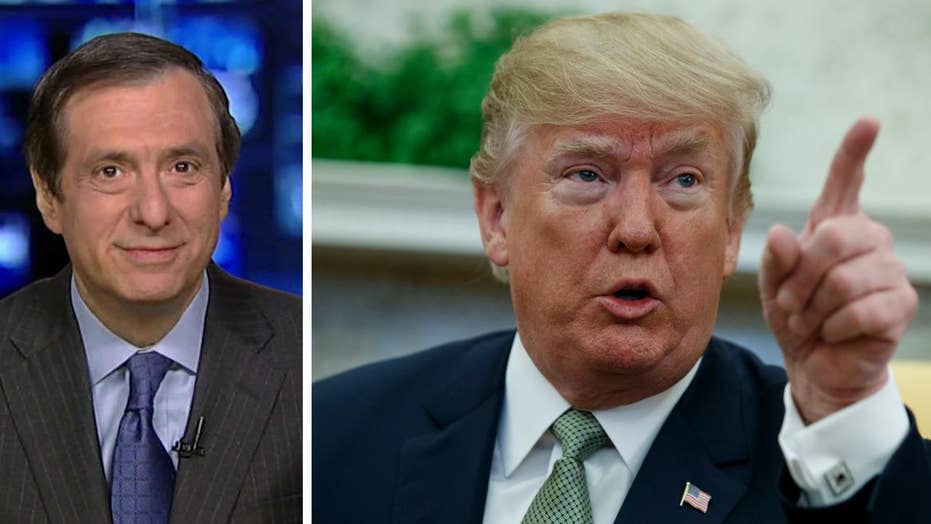 'MediaBuzz' host Howard Kurtz weighs in on why the media really knows nothing in relation to the tidal wave of speculation about who the president will evict next from the administration.

It's one of the most honest headlines I’ve seen in quite a while:

"In Trumpworld, nobody knows anything."

Axios slapped that line on a piece by round-the-clock reporter Jonathan Swan, who was dealing with the tidal wave of speculation about who the president will evict next from the administration.

This, in my view, was a refreshing contrast to all the pundits saying we hear that H.R. McMaster or John Kelly or David Shulkin or Ryan Zinke could be out by the end of the day. It's not that those aren't fair journalistic pursuits—and not that I haven't done similar stories like that in my career—but in this White House, it's like nailing Jell-O to the wall.

Here's what Swan wrote: "We can tell you that Trump has been putting on a heck of an act privately in the past two days, if he really does have all these elaborate plans that are being attributed to him.

"Here's all we really know: Trump is in the mood for change, and there's a long list of people he's been fed up with for a while."

"That's it. As far as when they might go, and who might replace them, serious people are in the dark. Trump floats ideas all the time, and often nothing comes of them."

In an interview, Swan told me the Trump operation is incredibly difficult to cover because he speaks to "the top level of the White House, people in the president's inner circle, and they don't know what’s going on.

"Whether it's tariffs, the surprise on North Korea or staffing, it's very hard to confirm anything or definitively shoot anything down. They know they could be embarrassed in the next two hours because their boss is so mercurial."

Swan says he tries to be "hyper-cautious" and, as a scoop artist himself, "I don't pretend I'm some bastion of glory. But there's only so many times you can write that H.R. McMaster is leaving the White House; at some point the story will be correct. I'd have to get it from Donald J. Trump himself.

"People have read that story 15 times. What's the reader to think when he reads it for the 16th time?"

That, of course, doesn't stop journalists from trying.

It’s easy to dismiss all this as palace intrigue, and there is a media fixation on who's up and who's down. But in a very short time, Hope Hicks and Gary Cohn quit the White House, Trump fired Rex Tillerson and nominated Mike Pompeo as his successor, and tapped CNBC’s Larry Kudlow to replace Cohn as chief economic adviser.

With so much chatter, journalists are scrambling on several fronts.

The Washington Post reported flatly last night that Trump "has decided to remove H.R. McMaster," according to "five people with knowledge of his plans."

CBS's Major Garrett reported yesterday that "a purge is coming" and that chief of staff Kelly "may also be on the way out," along with "up to three Cabinet secretaries."

Fox's chief White House correspondent John Roberts reported, starting Wednesday night: "We don't know if these are going to happen, but we are told there could be a bloodbath" by Thursday or Friday. That, he said would include:

"H.R. McMaster, the national security adviser, to be replaced by Ambassador John Bolton.

"Another potential change coming up, VA Secretary David Shulkin out, to be replaced by Energy Secretary Rick Perry.

"Another possible departure, it's rumored, this one may be further off, John Kelly, to potentially be replaced by OMB Director Mick Mulvaney."

But Sarah Huckabee Sanders threw cold water on the McMaster reports by tweeting last night that there will be "no changes at the NSC."

At a photo op yesterday, the president was asked about upcoming staff changes.

"Well, the story was very false," Trump said. "I mean, they wrote a story about staff changes today that was very false." He did not specify which story he had in mind.

But if it's true that "in Trumpworld, nobody knows anything," all shakeup stories should be taken with many teaspoons of salt. That’s especially true since the president, who once called the Tillerson-is-leaving stories fake news, may simply not have made up his mind.