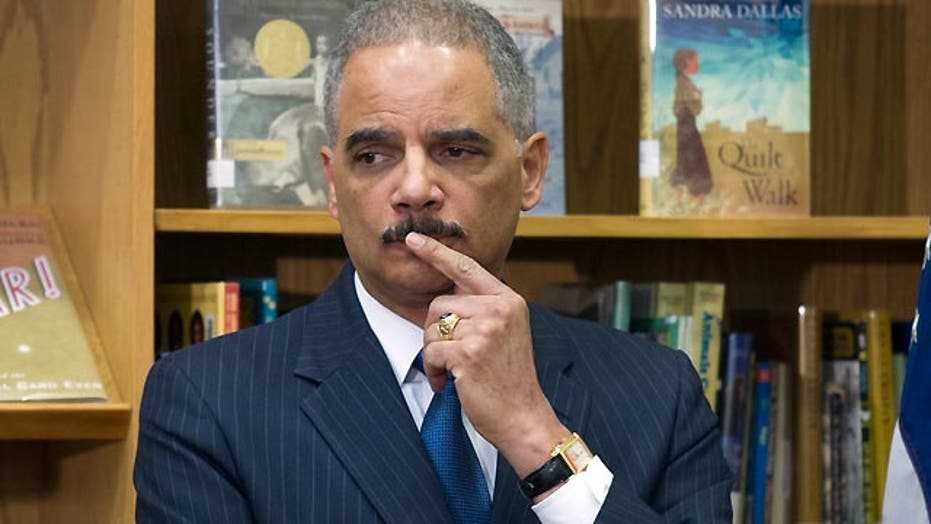 No special prosecutor for IRS scandal: Here’s the back story

Conservatives are up in arms over the Justice Department’s refusal to name a special prosecutor in the IRS scandal.

And that’s basically how the media covered it, as an Eric Holder vs. Ted Cruz argument.

But there’s some important history here that helps explain why the Obama administration is, in effect, able to investigate itself. And it’s a debate that goes to the heart of public confidence in government.

The attorney general’s office disclosed its decision in a letter to Cruz, saying the appointment is “not warranted” there is no “conflict of interest” in the Justice Department pursuing the case. The letter said the probe is being conducted by “career prosecutors and law-enforcement professionals…without regard to politics.”

The Texas senator fired back that Holder’s department is abandoning a “bipartisan tradition of the Department of Justice of putting rule of law above political allegiance.”

So how can the administration be trusted with such a sensitive probe? The reason Holder was able to make that decision goes back to Richard Nixon and Bill Clinton.

Nixon was essentially pressured into allowing the appointment of a Watergate special prosecutor after his attorney general resigned and he needed Senate approval for a successor. The new AG, Elliott Richardson, named Archibald Cox, who proved so aggressive that Nixon had fired him (after Richardson and his deputy refused to do so and quit) in the infamous Saturday Night Massacre.

Public sentiment toward special prosecutors was favorable after Cox’s successor, Leon Jaworski, completed his work. Jimmy Carter pushed through a 1978 ethics law that included a provision for naming more neutral-sounding independent counsels. When allegations were made against a range of top federal officials, the attorney general was required to recommend such an appointment by a special three-judge panel, unless a preliminary inquiry found the charges to be “insubstantial.”

Ronald Reagan opposed extending the law, and it was narrowed in 1983. But a spate of high-profile investigations -- against Carter aide Hamilton Jordan, Reagan’s Labor secretary Ray Donovan, and Reagan’s attorney general, Ed Meese -- resulted in no charges.

Along came independent counsel Lawrence Walsh, who launched the $48-million Iran-contra investigation (into charges that money from U.S. arms sales to Iran was improperly diverted to Nicaraguan rebels).  Most Republicans wound up hating the law, believing that Walsh had too much unchecked power and was out of control.

After the Supreme Court upheld the law's constitutionality, Republicans helped filibuster the law to death in 1992. But Clinton signed a new version into law two years later -- and independent counsels pursued several of his Cabinet members. After Ken Starr’s investigation of the Whitewater land deal morphed into the Monica Lewinsky investigation, Democrats hated the law as well. It expired in 1999 without much fuss from either party.

That means every administration now gets to make the call on whether to call in an outside prosecutor not under Justice Department control.

When the IRS inspector general found improper targeting of conservative groups in the Cincinnati office, Obama called the conduct “inexcusable.” Last month, though, he told Bill O’Reilly there was not a “smidgen of corruption” in the IRS.

The problem is the same one that gave birth to the post-Watergate law. If Justice finds no higher-ups were involved in the IRS misconduct, would that finding have credibility with the public? Would an outside probe have more credibility, or spiral out of control?

With the independent counsel law dead and buried, we’re not likely to find out.

The data whiz who called President Obama’s election and has now moved to ESPN just gave the Republicans a favorable forecast for November.

Nate Silver says the GOP has a 60 percent chance of taking control of the Senate.