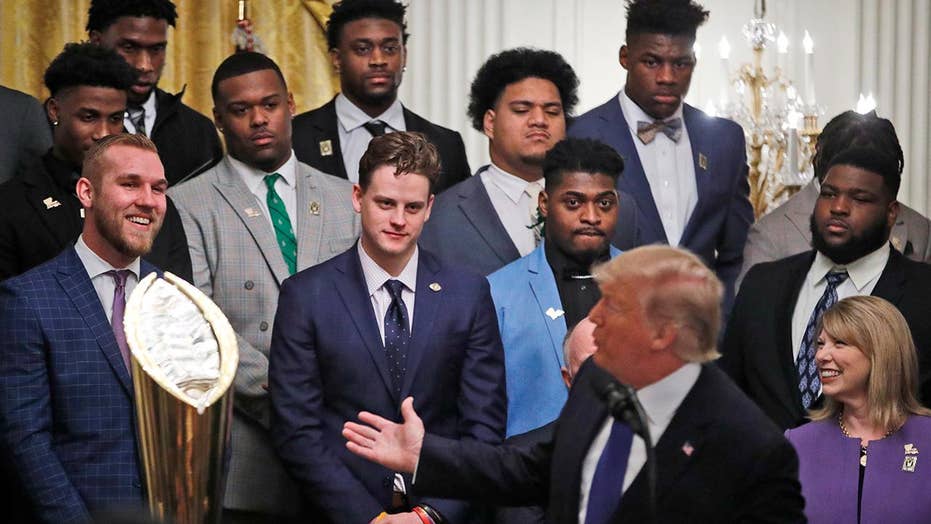 Just days after they capped off a 15-0 national championship season in the Mercedes-Benz Superdome with President Trump in attendance, the LSU Tigers stopped by the White House on Friday to be honored by the commander in chief. They topped Clemson 42-25 to grab their first title since the 2007-2008 season.

"Your football program has inspired countless fans across the country," Trump told the team.

And in between his shout-outs to team members, the president managed to weigh in on impeachment with colorful language, as he invited the team to the Resolute Desk in the Oval Office.

“It’s been there a long time, a lot of presidents, some good, some not so good. But you got a good one now! Even though they’re trying to impeach the son of a b----! Can you believe that? Got the greatest economy we ever had. ...We got the greatest military, we rebuilt it we took out those terrorists like your football team would have taken out those terrorists, right? We’re doing good,” he said.

Trump attended the game Monday and was cheered enthusiastically by the New Orleans crowd. This was after having had some less-than-enthusiastic welcomes at other public events, including the 2019 World Series.

The White House visit by head coach Ed Orgeron, quarterback Joe Burrow and crew came at the end of an eventful week for the Tigers. Police threatened to arrest their players because they were smoking in the locker room after their win, former LSU wide receiver Odell Beckham Jr. was seen handing players cash on the sidelines after the game – which led to an investigation into potential NCAA violations – and Beckham later was hit with an arrest warrant for slapping the butt of a security guard who was trying to prevent the LSU players from smoking indoors.

In his remarks, Trump mentioned some of the adversity the team overcame during the season, when offensive coordinator Steve Ensminger's daughter-in-law and popular sports reporter Carley McCord died in a plane crash.

"And it's not just for what you've done on the football field. In the face of heartbreaking tragedy you've rallied together behind offensive coordinator Steve Ensminger," he said.

Orgeron made sure to heap praise on his players when he got the chance to say a few words.

"This is a player-driven program," he said. "It's about the men behind me and the men in front of me. You guys did it, you guys set out with a plan, last year Jan. 17 that you were going to win the National Championship. You never talked about it, you went about it through hard work and dedication and you did it and I'm so proud."

LSU STAR JOE BURROW WILL BE HAPPY IF BENGALS DRAFT HIM NO. 1, HIS FATHER SAYS

After the event, Burrow said he appreciated the chance to go to the White House and the "love" that Trump gave to all the LSU players.

"I don’t care if you’re Republican, Democrat, don’t care about politics at all, that was an awesome experience for everybody," he said.

While the LSU White House visit seemed to go very well – Trump invited the players to take pictures behind the Resolute Desk and the team gave the president a "Trump" jersey with the number 45 – such visits have been fraught in the past. White House visits for teams that win championships have been common for decades, but the events have become more politicized in recent years.

'I don’t care if you’re Republican, Democrat, don’t care about politics at all, that was an awesome experience for everybody.'

NFL offensive lineman Matt Birk skipped out on a 2013 White House visit with then-President Barack Obama because he disagreed with Obama's stance on abortion. Additionally, three members of the undefeated 1972 Miami Dolphins gave Obama the cold shoulder that same year because of political differences. Obama was honoring the team's 40th anniversary and making up for the fact the players never got to visit the White House partially because of former President Richard Nixon's Watergate scandal.

Under Trump, White House visits have become even more fraught, with members of the New England Patriots and Philadephia Eagles skipping White House visits. Many players on the U.S. Women's soccer team, who publicly feuded with Trump during their World Cup run, made clear they would not visit Trump at the White House this summer, as well.