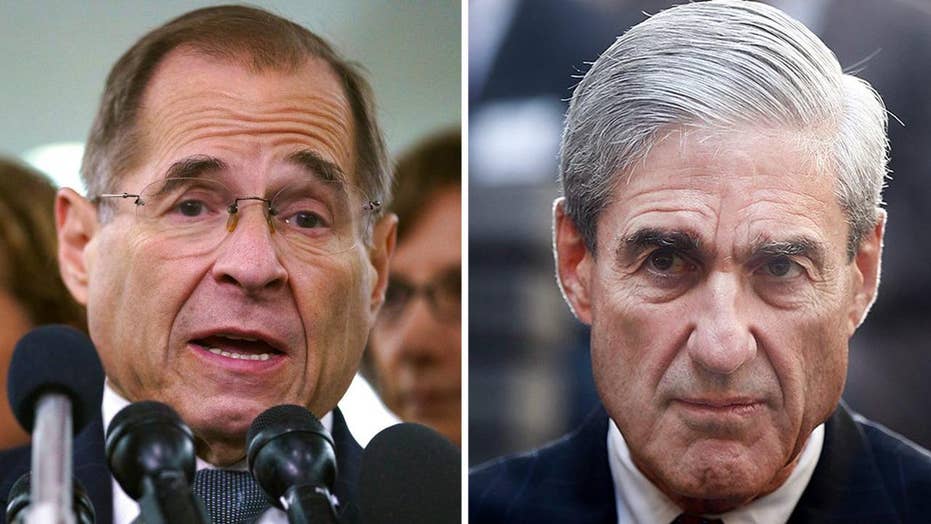 House Judiciary Committee Chairman Jerry Nadler, who would oversee any impeachment proceedings against President Trump, announced that he will submit more than 60 document requests to the White House and Justice Department on Monday -- a barrage that Nadler called the opening salvo in new and wide-ranging investigations.

Without naming Nadler, Trump tweeted late Sunday morning that he was being "persecuted by some very bad, conflicted & corrupt people in a Witch Hunt that is illegal & should never have been allowed to start - And only because I won the Election!"

Congressional Democrats have repeatedly promised to exercise tight oversight of the Trump administration since securing a majority in the House of Representatives in last November's midterms. But Nadler's comments signaled clearly that Democratic leaders are no longer counting on Special Counsel Robert Mueller's forthcoming report on possible Russia collusion to contain damning evidence against the Trump administration.

“Tomorrow, we will be issuing document requests to over 60 different people and individuals from the White House to the Department of Justice, Donald Trump, Jr., [Trump Organization CFO] Allen Weisselberg, to begin the investigations to present the case to the American people about obstruction of justice, corruption and abuse of power,” Nadler, D-NY., said on ABC News' "This Week."

He added that the goal of the probe was "to present the case to the American people about obstruction of justice, corruption and abuse of power."

Dershowitz: Michael Flynn did not commit a crime by lying

Harvard Law professor emeritus speaks out ahead of the sentencing of Trump's former national security adviser.

The evidence, Nadler maintained, was that Trump called the Mueller probe a "witch hunt," allegedly "tried to protect [fired national security adviser Michael] Flynn from being investigated by the FBI," and supposedly admitted that he had fired FBI Director James Comey "to stop the Russian thing" in an NBC interview.

“But regardless of recommendation [from the Justice Department], I was going to fire Comey knowing there was no good time to do it. And in fact, when I decided to just do it, I said to myself — I said, you know, this Russia thing with Trump and Russia is a made-up story. It’s an excuse by the Democrats for having lost an election that they should’ve won," Trump told anchor Lester Holt.

Trump added: "As far as I’m concerned, I want that thing to be absolutely done properly. When I did this now, I said I probably maybe will confuse people. Maybe I’ll expand that — you know, I’ll lengthen the time because it should be over with. It should — in my opinion, should’ve been over with a long time ago because it — all it is an excuse. But I said to myself I might even lengthen out the investigation. But I have to do the right thing for the American people. He’s the wrong man for that position.”

And the White House has denied that Trump ever told Comey to curtail its investigation into Flynn, who later pleaded guilty in Mueller's probe to making a false statement to two FBI agents. In a memo, Comey wrote that Trump had told him in the White House, “I hope you can see your way clear to letting this go, to letting Flynn go. ... He is a good guy. I hope you can let this go."

When pressed by Stephanopoulos as to whether Nadler would accept a possible report by Mueller finding no improper or illegal collusion by the Trump campaign with Russia, Nadler suggested he would not -- and then proceeded to unload a litany of unrelated complaints against the White House.

"We’d want to see the evidence behind that and see the validity of that, and we can agree to disagree," Nadler began. "But this investigation goes far beyond collusion. We’ve seen all the democratic norms that we depend on for democratic government attacked by the administration."

Among those attacks, Nadler said, were Trump's purported assault on the "freedom of the press. ... we’ve seen attacks on the Department of Justice, attacks on the FBI, attacks on judges. ... He’s intimidated witnesses in public."

Nadler added that "the Mueller investigation, No. 1, we don’t know when it’s ending, despite lots of rumors. No. 2 --  it’s focused on specific crimes. And we have to focus much more broadly on abuses of power."

In response, House Minority Leader Kevin McCarthy, R-Calif., said on "This Week" that Nadler had "decided to impeach the president the day the president won the election."

"Listen to exactly what he said. He talks about impeachment before he even became chairman and then he says, 'you've got to persuade people to get there,'" McCarthy said. "There's nothing that the president did wrong."

Nadler, in recent weeks, hired two veteran lawyers and Trump critics as the committee gears up to investigate the department and review Mueller's final conclusions. The lawyers, Barry Berke and Norman Eisen, have been retained on a consulting basis.

Republican representatives immediately cried foul, saying the lawyers are political operatives who have no business conducting a supposedly fair and impartial investigation. The GOP also raised questions as to who was paying for the lawyers, and how much.

Nadler's committee has also called in the former acting attorney general, Matthew Whitaker, and plans to question him again in the coming weeks. Whitaker is a close Trump ally who had criticized the Mueller report before he was appointed. William Barr has since been confirmed as attorney general.

The Judiciary Committee isn't the only House panel planning to look into Trump aggressively. Massachusetts Democratic Rep. Richard Neal, the chairman of the House Ways and Means Committee, is expected to eventually try to obtain Trump's tax returns, which the president has refused to release. But for now, Neal is taking it slow.

The law says the treasury chief "shall furnish" the requested information to members of the committee for them to examine behind closed doors. But reality is more complicated, and the request could end up in a lengthy court battle between Congress and the administration.

Last month, Neal held a hearing in which experts discussed the authority under current law for Neal to make a request for any tax returns to the treasury secretary. The hearing also examined proposals to compel presidents and presidential candidates to make years of their tax returns public.

Meanwhile, the head of the House Financial Services Committee, California Rep. Maxine Waters, has focused on Deutsche Bank, the German asset management firm that has loaned Trump's real estate organization millions of dollars over the years. She said this past week that the bank is cooperating with requests for documents.

And the House Intelligence Committee is reopening and expanding an investigation into Russian interference in the 2016 election that the Republican majority closed last year. At that time, Republicans said, over Democratic objections, that there was no evidence to show that Trump's campaign colluded or conspired with Russia.

The top Democrat on the committee then, California Rep. Adam Schiff, said Republicans had prematurely closed the matter without interviewing key witnesses and demanding important documents.

Schiff is now chairman, and last month he announced a broad new investigation looking not only at Russian interference, but also at Trump's foreign financial interests. Schiff said the investigation will include "the scope and scale" of Russian intervention in the 2016 presidential election, the "extent of any links and/or coordination" between Russians and Trump's associates, whether foreign actors have sought to hold leverage over Trump or his family and associates, and whether anyone has sought to obstruct any of the relevant investigations.

The committee interviewed former Trump personal attorney Michael Cohen in private on Thursday and will finish the interview this coming Wednesday. After Cohen left, Schiff announced that the committee will hold an open hearing later this month with Felix Sater, a Russia-born executive who worked with Cohen on an ultimately unsuccessful deal to build a Trump Tower in Moscow.

Speaking on CBS' "Face the Nation" on Sunday, Schiff asserted that there is "direct evidence" of improper collusion.

"I think there is direct evidence through emails from Russians offering dirt on Hillary for Russian effort to help elect Donald Trump," Schiff said. "Trump Tower -- all the lies to cover up that meeting. There is circumstantial evidence."

But, Schiff said, it's too early to talk about impeachment.

"That is something that we will have to await Bob Mueller's report and the underlying evidence to determine," Schiff said. "We will also have to look at the whole body of improper and criminal actions by the president including those campaign finance crimes to determine whether they rise to the level of removal from office."

Trump has called Schiff "little Adam Sh--" and maintains that the new probes he is leading are politically motivated.

Additionally, the House oversight committee has set a Monday deadline for the White House to turn over documents related to security clearances after The New York Times reported that the president ordered officials to grant his son-in-law Jared Kushner's clearance over the objections of national security officials.

"I don’t have any concerns," Bolton said. "I deal with Jared all the time on the Middle East peace process and a number of other issues. I trust him. I have no idea what the story is on the security clearance – it’s not something that falls within my area of responsibility – but if asked ‘Do I trust Jared Kushner?’ The answer is yes."

Fox News' Guerin Hays and The Associated Press contributed to this report.