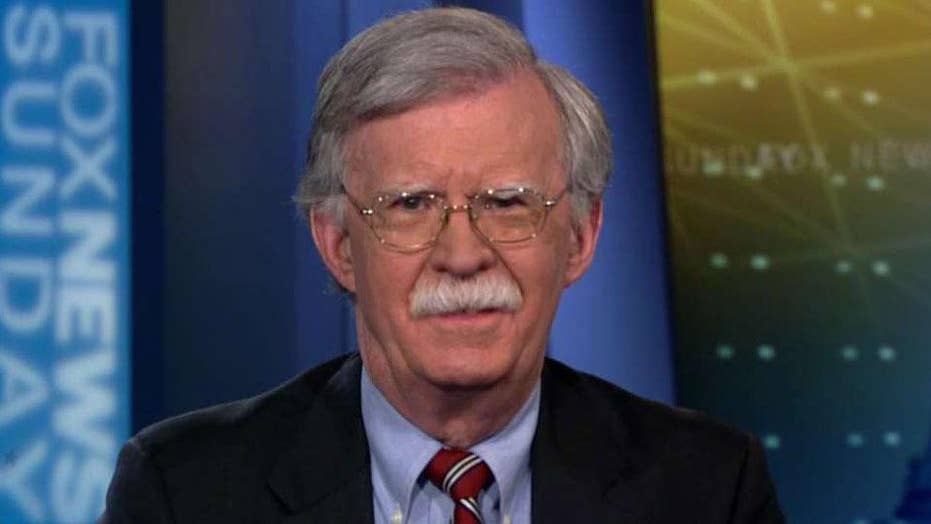 National Security Adviser John Bolton told "Fox News Sunday" that while the recent North Korea-U.S. summit in Hanoi, Vietnam, ended abruptly without a deal, future talks remain a very real possibility -- and that "time works in the favor of the president's position."

Bolton also walked back President Trump's statements during the summit that he took North Korean leader Kim Jong Un "at his word" concerning the death of American college student Otto Warmbier -- who died in 2017 after being detained in North Korea.

“I believe something very bad happened to him,” Trump said during a post-summit press conference, drawing bipartisan criticism. “I don’t think leadership knew about it.”

On Friday, Trump said he had been “misinterpreted” and said that “of course I hold North Korea responsible for Otto’s mistreatment and death" -- without mentioning whether he held Kim responsible. At the Conservative Political Action Conference (CPAC) on Sunday, Trump remarked: "I’m in such a horrible position because in one way I have to negotiate and the way I love Mr. and Mrs. Warmbier and I love Otto and it’s a very delicate balance.”

Bolton told anchor Chris Wallace on Sunday that Trump does not necessarily believe Kim's claim that he was unaware of Warmbier's apparent mistreatment. The 22-year-old University of Virginia student died in June 2017 after being returned home in a vegetative state; his parents have said he was tortured.

The suburban Cincinnati youth was visiting North Korea with a tour group when he was detained in 2016 for allegedly stealing a propaganda poster. North Korea has denied mistreating Warmbier.

"When he says, ‘I’m going to take him at his word,’ it just -- it doesn’t mean that he accepts it as reality," Bolton said, referring to Trump. "It means that he accepts that’s what Kim Jong Un said. ... I think one way to prove that is to give the United States a complete accounting."

The summit, on the whole, was a loss for North Korea, Bolton maintained.

"By rejecting a bad deal and by trying again to persuade Kim Jong Un to take the big deal that really could make a difference for North Korea," Trump had placed America's interests first, Bolton said. "As the president said, sometimes you have to walk away, and I think he made a very important point to North Korea and other countries around the world about negotiating with him that he's not desperate for a deal, not with North Korea, not with anybody."

Kim had "walked away" from "an extraordinary economic future" by refusing to totally dismantle the country's nuclear capability in exchange for sanctions relief, Bolton added.

"What he has said from the beginning is that North Korea, if it makes a strategic decision to denuclearize, can have a prospect of a very, very, bright economic future," Bolton told Wallace. "The president held that door open for North Korea in Singapore -- they didn’t walk through it. He held it open for them again in Hanoi, they didn’t walk through it. He’s ready to hold it open again."

Notable Quotables from the Hanoi summit and Cohen hearing

"The fact is, at the moment, the leverage is on the side of the United States, the economic sanctions continue to take hold," he added. "There’s no doubt over a protracted period of time, that the time does work in favor of the proliferator. Our judgment right now is the time works in the favor of the president position as North Korea sees the effect of these sanctions taking a greater effect.”

Separately, Bolton said he had no concerns about recent reports concerning Trump son-in-law and senior adviser Jared Kushner's security clearance. A spokesman for Kushner's attorney told Fox News Thursday that Kushner received a top-secret security clearance through "the regular process with no pressure from anyone," after The New York Times reported that Trump "ordered" then-White House Chief of Staff John Kelly to grant the clearance against the advice of then-White House Counsel Don McGhan.

"I don’t have any concerns," Bolton said. "I deal with Jared all the time on the Middle East peace process and a number of other issues. I trust him. I have no idea what the story is on the security clearance – it’s not something that falls within my area of responsibility – but if asked ‘Do I trust Jared Kushner?’ The answer is yes."

Concerning the ongoing humanitarian and politican crisis in Venezuela, Bolton said the White House is monitoring the situation and working to support the ouster of contested Venezuelan President Nicolas Maduro.

"We’re going to watch what happens," Bolton said. "I think we’ve warned Maduro and his henchmen and the Cubans very clearly. But the opposition is united in ways unprecedented over the last 20 years. And if Maduro took that step [of escalating the crisis], I think it would just hasten the day that he leaves."