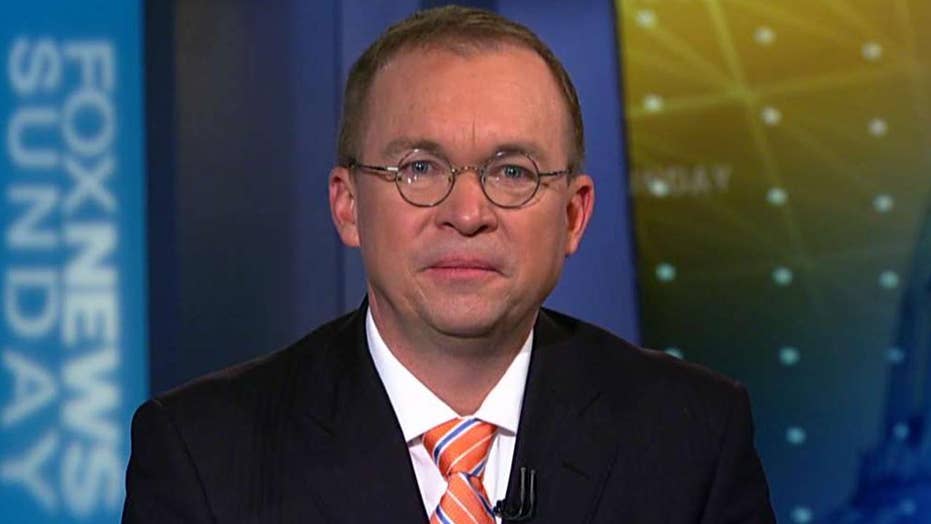 White House Budget Director Mick Mulvaney said Sunday that the administration doesn’t tolerate domestic violence “at all,” amid ongoing questions about whether Staff Secretary Rob Porter was allowed to keep his job amid such allegations and dismissed rumors that White House Chief of Staff John Kelly could be fired over his handling of the matter.

“Absolutely not,” Mulvaney told “Fox News Sunday.” “I think all of these stories about replacing General Kelly are mostly being fed by people who are unhappy that they’ve lost access to the president under General Kelly’s leadership. … I'm extraordinarily pleased with the job the chief has been doing. … I think the president is as well. I think all this talk about the chief's departure is much ado about nothing.”

Kelly reportedly offered his resignation over the matter, amid allegations he knew about Porter’s problems but allowed him to keep his White House post -- without full FBI security clearance.

Porter was fired after news reports late Tuesday and Wednesday in which Porter’s two ex-wives made domestic violence allegations against him, with one story including a picture of one of the wives with a black eye.

“We don’t tolerate it at all,” Mulvaney said Sunday, amid criticism that President Trump didn’t clearly say his administration has no tolerance for such behavior. “You cannot put trust in people who would do that to their significant other. … We have a zero-tolerance policy for it.”

He also attempted to provide some clarity -- or timeline -- about what the president and Kelly knew and when. And he suggested his bosses wanted to give Porter the benefit of the doubt.

“Someone whom we know and trusted and worked with came to the president and the chief of staff and said, ‘I’m being accused of these things. They are not true.’ As soon as Rob Porter was proven wrong, he was not telling the truth, when the photos came out Wednesday, he was gone almost immediately.”

Mulvaney is set Monday to announce the details of the new budget on which Congress agreed last week, but found himself Sunday mostly answering questions about the Porter situation.

He also responded to Trump’s tweet Saturday in which he didn’t mention a zero-tolerance policy but said: “Peoples (sic) lives are being shattered and destroyed by a mere allegation. Some are true and some are false. Some are old and some are new. There is no recovery for someone falsely accused - life and career are gone. Is there no such thing any longer as Due Process?”

Mulvaney pointed out the tweet didn’t mention Porter and wondered whether it was referring to Trump’s business friend Steve Wynn, the Las Vegas hotel/casino mogul accused of sexual misconduct.

He also suggested that “what you also saw from the president (in the tweet) was a certain madness about somebody whom he liked who let him down.”