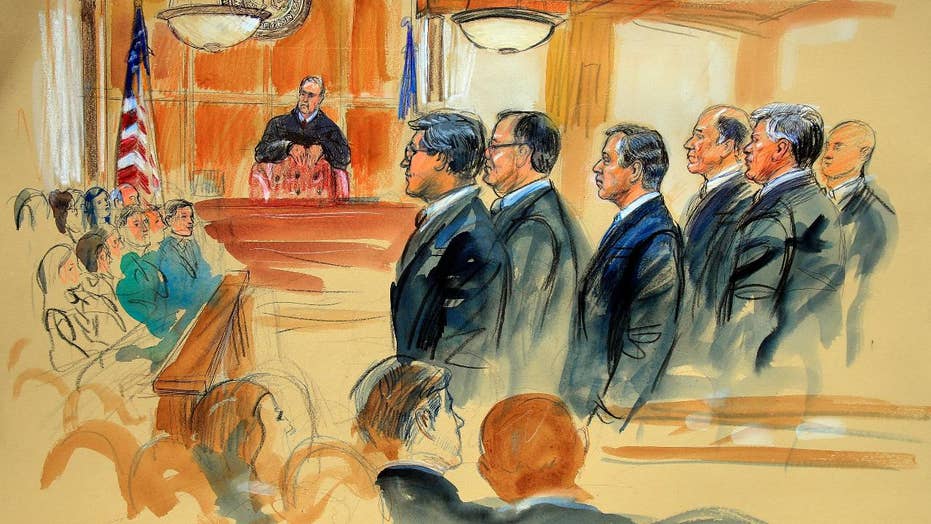 Jurors will not hear anything about Russia collusion or any of the other special counsel headlines. Peter Doocy has the details for 'Special Report.'

Former Trump campaign chairman Paul Manafort's lavish lifestyle was front-and-center during opening arguments in his fraud trial Tuesday afternoon, as prosecutors said he lied to put his money ahead of the law, while defense attorneys -- and even the presiding judge -- reminded jurors that exorbitant wealth, in itself, is not a crime.

Devine, under cross-examination by Manafort attorney Richard Wesley, confirmed that Manafort's former business partner Rick Gates handled most of Manafort's day-to-day business operations. The admission was significant because defense attorney Thomas Zehnle said in his opening statement that Manafort relied on others to keep track of the millions of dollars he was earning from his Ukrainian political work, and had misplaced his trust in Gates.

This courtroom sketch depicts Paul Manafort, fourth from right, standing with his lawyers in front of U.S. district Judge T.S. Ellis III, center rear, and the selected jury, seated left, during the jury selection of his trial at the Alexandria Federal Courthouse in Alexandria, Va., Tuesday, July 31, 2018. (AP)

Gates, also an ex-Trump aide, pleaded guilty and cut a deal with prosecutors and is expected to testify in the trial. He allegedly worked with Manafort to secure some loans fraudulently by falsifying profit-and-loss statements.

The trial is the first arising from Special Counsel Robert Mueller's Russia probe, and it poses a major test of the ongoing investigation that President Trump and top Republicans have long accused of being politically motivated.

The case does not involve any alleged Russian meddling or collusion, and instead focuses on accusations that Manafort failed to properly report his income on tax returns and defrauded banks to obtain multimillion-dollar loans.

SHOWDOWN IN VIRGINIA: BACKGROUND ON THE MANAFORT TRIAL

In making their opening remarks in the trial in Alexandria, Va., prosecutors spent more than twenty minutes outlining expensive purchases they said Manafort made with money he earned doing work for Ukrainian oligarchs and the Ukrainian government, including Yanukovych.

Assistant U.S. Attorney Uzo Asonye told the jury that Manafort considered himself above the law as he funneled tens of millions of dollars through offshore accounts to pay for personal expenses such as a $21,000 watch and a $15,000 jacket made of ostrich.

But Judge T.S. Ellis III interjected to remind jurors that wealth alone is not criminal, and he rebuked Asonye in front of the jury for saying that the "evidence will show" Manafort's guilt.

"It isn't a crime to have a lot of money and be profligate in your spending," Ellis said.

Ellis had harshly admonished members of Mueller's team in a tense preliminary hearing in May, saying they were pursuing the case against the 69-year-old ex-Trump adviser only as a means to target the president.

"All of these charges boil down to one simple issue: that Paul Manafort lied."

"This is the way that they required it to be done," Zehnle said. "Paul Manafort traveled in circles that most people will never know and he's gotten handsomely rewarded for it. We do not dispute that."

But on redirect examination, prosecutors got Devine to acknowledge -- over a defense objection -- that he had never set up any offshore accounts in Cyprus, as Manafort is alleged to have done.

Devine, however, was repeatedly positive about his work experiences with Manafort, praising his work ethic and strategic sense.

Security personnel from the Department of Homeland Security's Federal Protective Service, watch the vicinity around the Alexandria Federal Court in Alexandria, Va., on day one of Paul Manafort's trial, Tuesday, July 31, 2018. (AP)

Manafort's team also denied he was trying to hide money, saying he simply did not understand all the complexities of the tax code, like many Americans -- and that his penalty should be an audit, not the possibility of hundreds of years in prison.

The prosecution's strategy of focusing on Manafort's wealth was not a surprise. The list of 35 potential witnesses rolled out in the run-up to the federal trial in northern Virginia signaled a heavy focus on his luxurious lifestyle.

WHO ARE THE 35 POTENTIAL WITNESSES IN THE MANAFORT CASE? EX-BUSINESS ASSOCIATES, FMR BERNIE SANDERS CAMPAIGN AIDE, AND MORE

Opening statements began shortly after jurors were seated in the case earlier in the day. The jury is composed of six men and six women, with four alternates.

The trial is expected to last approximately three weeks.

Also on Tuesday, a federal appeals court rejected Manafort's request to be freed from detention during trial.

Manafort has been held in solitary confinement for alleged witness tampering by the judge in his pending D.C. trial, Judge Amy Berman Jackson. That separate trial, which is set to begin in September, involves accusations that Manafort failed to register as a foreign agent, made false statements to investigators and laundered money.

Manafort's attorneys have said his confinement has been unnecessary and unduly harsh, and has hurt his ability to communicate with his defense team. They have the option of asking the full appeals court to weigh in or going directly to the Supreme Court for emergency relief.

With Justice Anthony Kennedy’s retirement effective Tuesday, it's likely only eight justices would decide the matter in coming days or weeks. It would take at least five justices to prevail; a 4-4 tie would mean the lower court ruling would stand and Manafort would remain in custody until after his separate trial in D.C.