Greitens previously admitted to having an affair. (AP)

A woman who had an affair with Missouri Gov. Eric Greitens in 2015 told lawmakers that he spanked, slapped, grabbed and shoved her during a series of sexual encounters -- some of which were nonconsensual, according to an official report released Wednesday.

After the report went public, the state's Republican House Speaker Todd Richardson said a House investigatory committee would expand its investigation into Greitens and would make recommendations as early as May about whether to pursue impeachment.

The woman, known only as "K.S.", told the committee Greitens, a Republican, took a partially nude photo of her after tying her to exercise equipment and ripping off clothes that he had made her change into for what she initially thought would be a "sexy workout." She then claimed Greitens told her that "everyone will know what a little wh--- you are" if she told anyone about the encounter.

The woman's claims contradicted Greitens' contention that "there was no violence" and "no threat of violence" in what the governor has described as a consensual extramarital affair.

In its report, the committee -- made up of five Republicans and two Democrats -- described the woman as an "overall credible witness" and noted that Greitens so far has declined to testify or provide documents to the panel.

Shortly before the report was released, Greitens gave a brief statement to reporters describing the investigation as "a political witch hunt... exactly like what's happening with the witch hunts in Washington, D.C." He went on to call the report "one-sided tabloid, trash gossip that was produced in a secret room."

Hours later, Greitens issued a new statement, insisting that the affair "was an entirely consensual relationship, and any allegation of violence or sexual assault is false."

The House investigation began shortly after Greitens was indicted in February on a felony invasion-of-privacy charge for allegedly taking the photo of the woman and transmitting it in a way that could be accessed by a computer. The report said lawmakers did not possess any physical or electronic evidence of the photo.

"The accusations published in the House Committee's report will be directly contradicted by the facts that emerge in court," said Greitens, whose trial is due to begin May 14. "In just 33 days, a court of law and a jury of my peers will let every person in Missouri know the truth and prove my innocence.

"This was an unfortunate process, in which good people, including some on the committee, were left to try and do the right thing and sort through lies and falsehoods without access to the full facts," Greitens added. "In the court of law, everyone will have the facts, and these allegations will be proven false."

Greitens' attorneys had tried to persuade the Legislature to delay its report until after his criminal trial, arguing that it could include some information that isn't fully accurate and could taint the jury pool.

According to the report, the woman testified that she met Greitens in 2013 as a customer of her hair salon. She said she had a crush on Greitens but was shocked when he ran his hand up her leg and touched her crotch without her consent during a March 2015 hair appointment. She added that he later invited her to his St. Louis home while his wife was out of town.

After she arrived through the back door, the woman testified, Greitens searched her purse and "patted her down from head-to-toe." He then allegedly asked if she had exercised and had her change into a white T-shirt with a slit on the top and pajama pants.

"I thought, oh, this is going to be some sort of sexy workout," the woman testified.

But once in his basement, Greitens taped her hands to pull-up rings, blindfolded her, started kissing her, ripped open the shirt and pulled down her pants, the woman testified. She didn't give consent to be disrobed or kissed, the report said. The woman testified that she then heard a click, like of a cellphone picture, and saw a flash.

The woman testified that Greitens told her: "Don't even mention my name to anybody at all, because if you do, I'm going to take these pictures, and I'm going to put them everywhere I can. They are going to be everywhere, and then everyone will know what a little wh--- you are."

When she remained silent, the woman said Greitens "spanked me and said, 'Are you going to mention my name?' And I said, I just gritted through my teeth, and I said, 'No.' And he's like, 'Good, now that's a good girl.'"

"I was definitely fearful," the woman testified to the legislative committee. 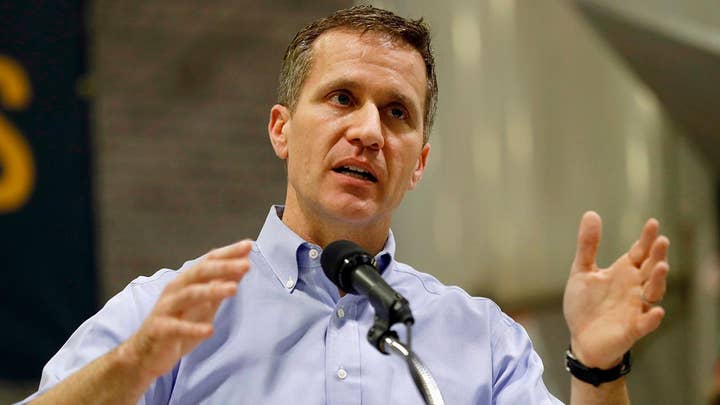 After telling Greitens, "I don't want this," the woman testified that Greitens unbound her hands. She said she started "uncontrollably crying." She said Greitens then grabbed her in a hug and laid her down. She said he put his penis near her face and she gave him oral sex. Asked by the committee whether the oral sex was coerced, she responded: "Coerced, maybe. I felt as though that would allow me to leave."

The woman testified she returned to Greitens' house later that day because she had forgotten her keys. She said she confronted him about taking a photo and he responded: "You have to understand, I'm running for office, and people will get me, and I have to have some sort of thing to protect myself." Then she said Greitens added: "I felt bad, so I erased it."

The woman testified that she had several additional sexual encounters with Greitens, including one in June 2015 when "he slapped me across my face" after she acknowledged having slept with her husband. She said she didn't think Greitens was trying to hurt her, but rather, "I felt like he was trying to claim me."

She testified that in another sexual encounter, Greitens "out of nowhere just, like kind of smacked me and grabbed me and shoved me down on the ground, and I instantly just started bawling."

It "actually hurt, and I know that I actually was really scared and sad when that happened," she said.

The state's House Minority Leader Gail McCann Beatty, a Democrat, said: "For the good of the state, Eric Greitens must immediately resign" or else the House must "restore integrity" to the office.

Greitens, a Rhodes Scholar and former Navy SEAL officer, was considered a rising GOP star. He went so far as to reserve the web address ericgreitensforpresident.com years ago. Initially a Democrat, he switched parties in 2015.

Greitens first acknowledged having an extramarital affair on Jan. 10, when St. Louis TV station KMOV ran a story revealing that the woman's ex-husband had released a secret audio recording of a 2015 conversation in which she told him about the photo Greitens took at his home.

Greitens' attorneys have asserted that prosecutors have failed to produce evidence that a photo exists. Prosecutors previously acknowledged that they didn't have the photo, though they could be trying to obtain it.

Hawley is also investigating The Mission Continues, the veterans charity founded by Greitens, as it related to the state's consumer protection and charitable registration and reporting laws. That probe followed media reports that Greitens' campaign had obtained and used a charity donor list in 2015 as it ramped up fundraising for his gubernatorial bid.