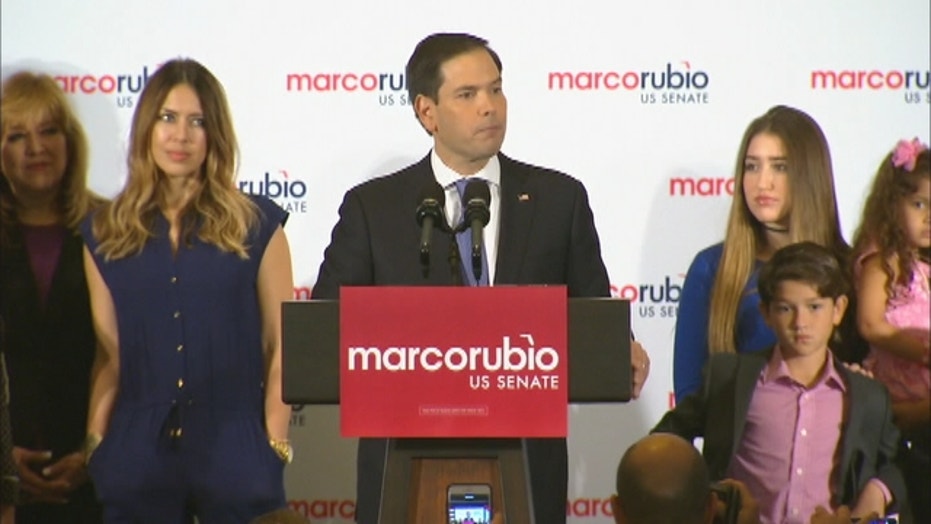 In fact, Rubio, 45, was outperforming his presidential campaign nemesis, Donald Trump – who had a slight 49 to 48 percent lead over Democrat Hillary Clinton with 91 percent of the Florida precincts reporting. Rubio, by contrast, had a comfortable 52 to 44 lead over Murphy.

In March of this year, Trump prompted Rubio to drop out of the presidential campaign by winning the GOP primary in the senator's home state.

In his victory speech, Rubio referred to his primary defeat, saying, “This is a lot better than the last time I did one of these in Miami.”

Rubio also ventured into Spanish during his speech, acknowledging the Puerto Ricans who have flocked to the I-4 corridor in the state. “I want to thank the Boricua community for voting for me. Puerto Rico is here today,” he said in Spanish. “I want to also thank the Venezuelan community and the Colombians as well. My wife and children are part of that community. And of course the Cuban community or course.”

One of the strongest arguments Murphy made during his underdog campaign to defeat Rubio was his tentative endorsement of the billionaire TV reality star during the Republican National Convention. At rallies, in interviews and most notably during debates, Murphy repeatedly made the Rubio-Trump connection.

There were stark differences between Rubio and Murphy on guns, health care, foreign policy, economic issues and abortion.

Rubio, 45, instantly became the frontrunner in the race when he decided to seek a second term after dropping out of the presidential race. His change of mind made a more difficult path for Murphy, 33, who was still relatively unknown despite announcing his candidacy more than a year before.

Murphy even loaned his campaign $1 million late in the race for television ads, money that was needed after the Democratic Senatorial Campaign Committee and the Senate Majority PAC pulled money and support from his campaign, moves that upset some Florida Democrats who believed Murphy was closing the gap with Rubio.

Thanks to Rubio's name recognition and money advantage, he had pulled ahead of Murphy in recent polls.

Murphy is a two-term congressman who was attacked for embellishing his resumé. He said that his work as a certified public accountant and his time as a small business owner were an asset that would help him in D.C. But while he worked for an accounting firm in Florida, he wasn't a licensed CPA in the state, and his environmental cleanup business was set up by his wealthy father.