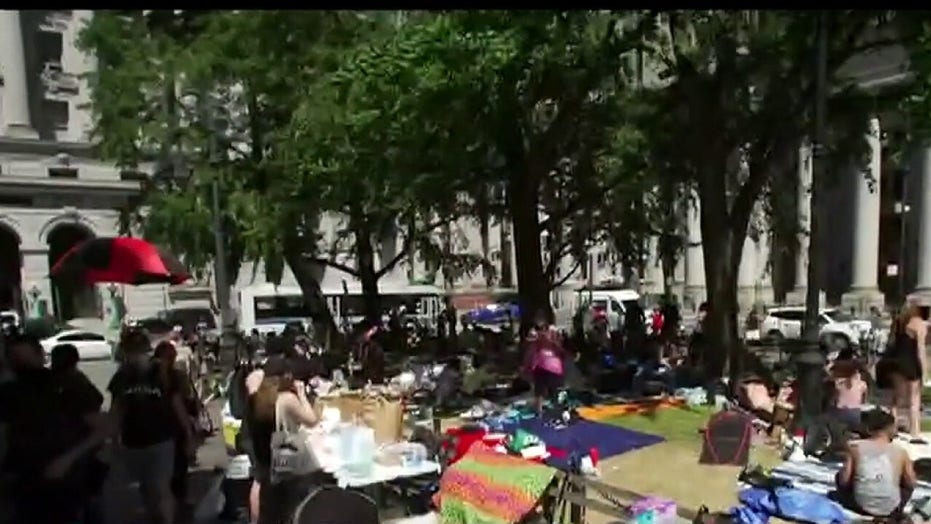 As unrest over the death of George Floyd and racial inequality in general reverberates across the United States, local politicians are facing an intense new wave of pressure from protesters demanding police budget cuts as they attempt to balance keeping order in their cities and enacting reforms.

In the latest development, New York City Mayor Bill de Blasio is grappling with protesters who refuse to leave an encampment in front of New York's City Hall, as they demand $1 billion be cut from the police department's budget. The department's budget is about $6 billion, and the city has a July 1 budget deadline.

"The #DefundNYPD for #NYCBudgetJustice campaign is demanding at least $1 billion dollars be cut from the NYPD’s budget - and this money must be reinvested for services, programs, and infrastructure that directly benefits Black, Latinx and other communities of color most devastated by COVID-19," the website for Communities United for Police Reform says.

De Blasio, in turn, proposed a plan that would cede to the protesters' demand for the $1 billion cut in police funding.

"My office presented to City Council a plan that would achieve the billion in savings for the NYPD and shift resources to young people, to communities in a way that would help address a lot of the underlying issues that we know are the cause of so many problems in our society," he said Monday.

Across the country, Seattle officials have been in their own standoff with the Capitol Hill Organized Protest (CHOP), a multiple-block area of the city's Capitol Hill neighborhood that has been occupied for weeks by activists seeking the defunding of the city's police department.

There was another shooting Monday morning at the CHOP. One person was injured and one died, according to the Seattle Police Department. This is the fifth shooting in the area since it was declared "police-free" by its occupants, who forced the police to abandon a precinct in the area. The Monday shooting produced CHOP's second fatality.

"Homicide detectives are investigating after one man was killed and another was injured in a shooting early Monday morning on Capitol Hill," the Seattle Police department said in a release Monday.

The protesters, as the occupied area is becoming harder to manage, are reportedly considering falling back into the abandoned precinct to secure it as they try to get the city to cede to their demands.

A death from a previous shooting in CHOP led Mayor Jenny Durkan to announce she would move to dismantle the zone, but efforts to ask organizers to leave, thereby avoiding police intervention, have so far been fruitless.

NEW YORK, USA - JUNE 24: A group of Black Lives Matter protestors prepare banners at City Hall across from One Police Plaza as part of the "Defund NYPD" and "Occupy City Hall" movement after spending the night on June 24, 2020 in New York City, United States. (Photo by Tayfun Coskun/Anadolu Agency via Getty Images)

DE BLASIO ANNOUNCES PROPOSAL TO CUT NYPD BUDGET BY $1B

On Friday, meanwhile, St. Louis Mayor Lyda Krewson apologized after reading the names and partial addresses of at least 10 protesters who were calling for police to be defunded during a now-deleted live briefing about the coronavirus, which prompted some to accuse her of doxxing and call for her resignation. Krewson, in response to a question about protesters, said some had given her suggestions for defunding the police and spending that money elsewhere, reading the names and streets of at least 10 activists.

“They presented some papers to me about how they wanted the budget to be spent,” Krewson said, holding a pile of crumpled papers. “Here’s one that wants $50 million to go to Cure Violence, $75 million to go to Affordable Housing, $60 million to go to Health and Human Services and have zero go to the police.”

Krewson then, according to the River Front Times, read the person’s name and the street they lived on, adding the person “wants no police — no money going to police."

She added: "I agree with all these things, by the way — except we're not going to take all the money from the police," she said. "I think we need our police department."

She apologized on Friday for the comments, saying that she did not intend to intimidate anyone.

"Tonight, I would like to apologize for identifying individuals who presented letters and comment cards to me at City Hall as I was answering a routine question during one of my updates earlier today," she said. "While this is public information, never did I intend to cause distress or harm to anyone. The post has been removed and again, I sincerely apologize."

And Oklahoma County, Okla., District Attorney David Prater was condemned by many, including the American Civil Liberties Union, after he brought charges against a number of protesters who were involved in the violence that broke out in Oklahoma City in late May, according to The Oklahoman. The publication reported that the charges included felonies for terrorism, rioting and assault, and that Prater made harsh comments about the people involved in the violence.

"This is not Seattle," Prater said. "We're not putting up with this lawlessness here."

The charges and the statement from Prater led the ACLU of Oklahoma to tear into Prater in a statement issued Saturday.

"Oklahoma County District Attorney Prater’s invocation of the Oklahoma Anti-Terrorism Act against persons protesting the death of George Floyd is nothing short of an abuse of power," Michael Redman, the interim legal director for the ACLU of Oklahoma, said. "The charging decisions are inflammatory at best, and, at worst, deliberately unconstitutional. It is an unsubtle attempt to stifle free speech by over-charging individuals with anti-terrorism conduct and the implicit threat that, you too, can face serious anti-terrorism charges simply by being present during a protest."

Minneapolis Mayor Jacob Frey was one of the first local officials to face a "Defund the Police" backlash earlier this month after he wouldn't endorse calls from members of the city council and activists to completely dismantle the Minneapolis Police Department. Frey was asked point-blank if he would back the dismantling of the police department while addressing a crowd of protesters.

"I do not support the full abolition of the Minneapolis Police Department," Frey says.

The council last week voted unanimously to remove the mandate in the city's charter that it maintain a police department, the first step in their plan to replace it with a  Department of Community Safety and Violence Prevention, “which will have responsibility for public safety services prioritizing a holistic, public health-oriented approach,” a draft of the amendment said.

While most widespread protests -- which in the early days coincided with violent riots, largely in big cities and mainly after dark, even as many protests were peaceful -- have abated since late May and early June, activists have capitalized on the wave of public opinion to extract action from politicians everywhere from the White House to city hall. They've also seen huge fundraising windfalls as people have been eager to give to causes like Black Lives Matter and bail funds, which fight against racial inequality and police brutality.

One GoFundMe page associated with the Black Lives Matter Los Angeles chapter, for example, had been in existence since 2018 and as of the beginning of June had raised about $615,000. In less than four weeks, it's skyrocketed to over $2.4 million.

And The National Bail Fund Network, which essentially serves as a directory for local groups that help disadvantaged people afford bail, has seen its organizations raise more than $75 million in recent weeks, according to a spokesperson. In a three-week period, that spokesperson says, "many individual bail funds have seen an increase of 100-200 times last year's annual fundraising amount."