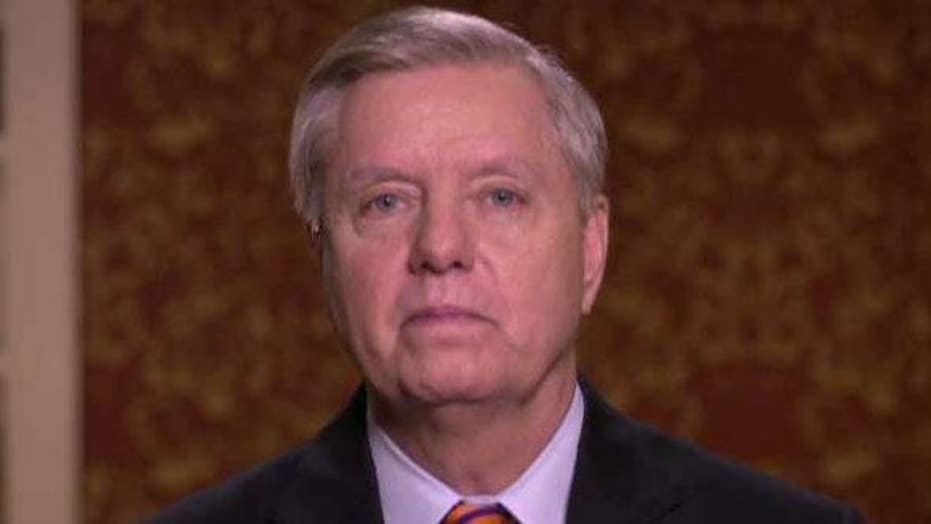 Sen. Lindsey Graham, R-S.C., told Fox News' "Hannity" Wednesday night that if President Trump backs away from his demand for $5.7 billion to fund a wall along the U.S.-Mexico border, it would mark "the end of 2019 in terms of him being an effective president" and "probably the end of his presidency."

"I'll tell you exactly how this is going to end," Graham told host Sean Hannity about the border-security standoff, which has shut down part of the federal government for nearly two weeks. "The president is going to challenge the Democrats to compromise and if they continue to say no, they’re going to pay a price with the American people."

Graham told Hannity he would support a compromise providing funding for the wall "as a down payment to securing the border." In exchange, Graham said, he would support giving three-year work permits to approximately 700,000 undocumented immigrants who were brought to the United States as children and covered by the Obama-era Deferred Action for Childhood Arrivals (DACA) program. In addition, Graham said, people from ten countries who have temporary protected status (TPS) should have their legal status reaffirmed, but should not be given a pathway to citizenship.

"The president said, ‘let’s make a deal.’ The Democratic response is basically, ‘go to hell,'" Graham said. "We need the wall, they’ve all voted for the wall, and the only way we’re going to get the wall is to fight for it."

"Most Americans want to do two things, they want to secure our border and they want to be reasonable to people like the DACA population," Graham added.

"The president said, ‘let’s make a deal.’ The Democratic response is basically, ‘go to hell.'"

House Democrats are expected to bring forward a bill Thursday that would fund the Department of Homeland Security at its current levels, with $1.3 billion for border security and no wall funding, through Feb. 8 in a move to buy time while negotiations over the barrier continue. Graham echoed Senate Majority Leader Mitch McConnell, R-Ky., by declaring the bill "is not going to see the light of day" in the Senate.

"We're going to fight," Graham said. "I don’t know how this is going to end, but we’re not giving up until we get the money ... that's the end of us if we give in on this issue as Republicans."