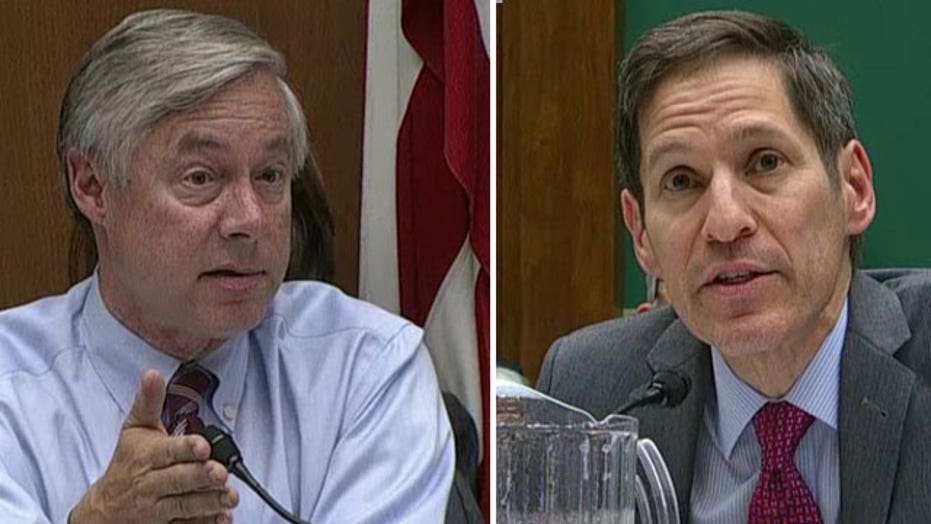 Rep. Upton: If other countries are banning travel to and from West Africa, why isn't US government?

Federal health officials faced the ire of congressional lawmakers at a tense hearing on Thursday over the spread of the Ebola virus in the United States, as Republicans sparred with the witnesses over why they are not seriously considering a travel ban for the Ebola "hot-zone."

Calling the response so far "unacceptable," Upton joined the growing call for the Obama administration to pursue "travel restrictions or bans from that region beginning today."

Following a meeting with administration members coordinating the government's Ebola response, the president said late Thursday he was "not philosophically opposed" to a travel ban but experts had told him it would be less effective than current measures.

In response to pressure to appoint an Ebola czar, he said it might be "appropriate" for him to name an additional person to head the government response.

Earlier health officials continued to downplay the need for flight restrictions for flights to and from West Africa, arguing that officials still would have a difficult time tracking where travelers have been.

Lawmakers' frustration on the issue showed through, with Rep. Steve Scalise, R-La., firing off a string of questions at the end of the hearing about what conversations the Centers for Disease Control and Prevention had had with the White House on travel bans.

The hearing comes as lawmakers, and the public, question whether the government is doing enough to contain the virus as two Texas hospital workers so far have tested positive for the virus after treating a Liberian man in Dallas. At least two lawmakers -- the latest being Rep. Paul Gosar, R-Ariz. -- have called for Frieden's resignation. Others want a single point person for the U.S. response to be named.

Frieden said he understands there is a lot of "fear" surrounding the disease.

Rep. Tim Murphy, R-Pa., chairman of the House Energy and Commerce subcommittee holding the hearing, also said at the close of the hearing he was concerned that the federal officials had not admitted any mistakes -- as a representative for the Texas hospital system did.

"That troubles me," Murphy said.

Murphy is among the lawmakers calling for a travel ban and several other increased security measures to stop the spread of Ebola.

He also claims that Frieden told him the real reason the Obama administration is opposing a travel ban for Ebola-stricken African countries is that U.S. officials are concerned about hurting their economies. At the hearing, he claimed that public health policies may be "based upon a stated concern with cutting commercial ties with fledgling democracies rather than protecting public health in the United States."

Urging a travel ban, he said: "We do not have to leave the door open to all travel to and from hot-zones in Western Africa while Ebola ... is an unwelcome and dangerous stowaway."

The CDC's alleged explanation to Murphy about African economies would seem to conflict with what Frieden and other top health officials have said publicly about the prospect of a travel ban, which they oppose. They frequently say that halting flights would hurt the flow of medical supplies and personnel in the region -- and in turn put West Africa more at risk.

At the hearing, Frieden stressed that the CDC knows "how to control Ebola," using "tried and true measures."

He said the government will "consider any options" to protect Americans but continued to argue against a travel ban. Confronted by Murphy over his apparent desire to "protect fledgling democracies," Frieden said: "My sole concern is to protect Americans."

Meanwhile, Dr. Daniel Varga, the chief clinical officer and senior vice president for Texas Health Resources, said he is "deeply sorry" that "mistakes" were made at the Texas facility, and vowed to determine how the errors occurred.

Varga apologized at the hearing for how the hospital handled the treatment of Thomas Eric Duncan, a Liberian national who became the first person diagnosed with Ebola in the U.S. He died Oct. 8.

"Unfortunately, in our initial treatment of Mr. Duncan, despite our best intentions and a highly skilled medical team, we made mistakes," he said. "We did not correctly diagnose his symptoms as those of Ebola. And we are deeply sorry."