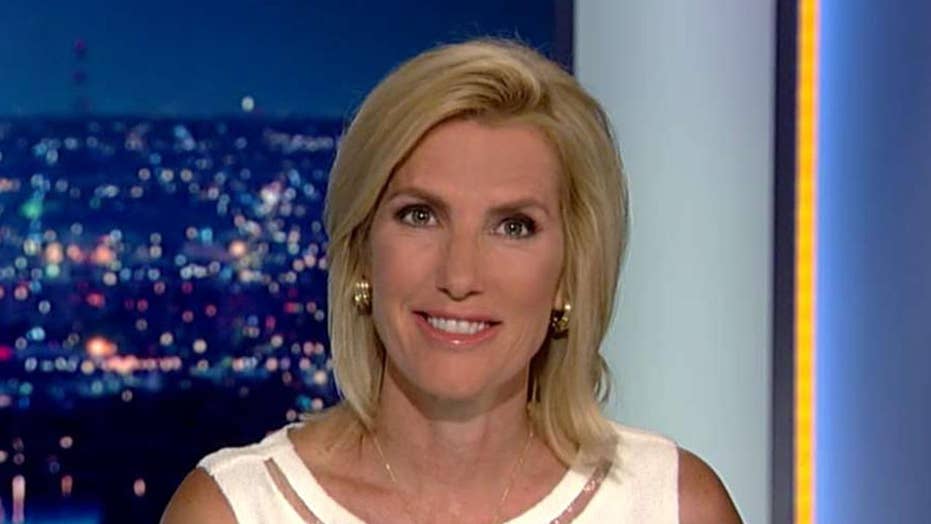 In a biting monologue Thursday night, Fox News' Laura Ingraham went after Nancy Pelosi, saying the House speaker has an "obsession" with President Trump, calling her "the leader of the do-nothing party" and questioning her mental fitness.

"Nancy Pelosi doesn't seem well," Ingraham said on "The Ingraham Angle. "The Pelosi I remember was a hard-charging California congresswoman with big, bold legislative ideas. Although Republicans opposed her Obama-era tax-and-spend, the stimulus or her ObamaCare cramdown, at least she was doing something. But now she spends her days obsessed with President Trump, muttering and sputtering,"

Ingraham mocked Pelosi, playing clips of the lawmaker from San Francisco struggling to find her thoughts at news conferences.

The back-and-forth between Trump and Pelosi continued Thursday with the speaker asking the president's family to hold an intervention with the president due to his meeting walkout Wednesday. Trump responded by saying Pelosi was "not the same person, she's lost it."

"Number one, when you cannot produce a coherent thought, maybe it's time to hang it up. Number two, you've had the gavel for four months and you have nothing to show for it but resistance. And number three, you as leader of the Democrats are doing a grave disservice and real damage to America by repeatedly refusing to recognize the legitimacy of the duly elected president of United States and his appointed Cabinet," Ingraham said.

Ingraham also played clips of Democratic presidential candidate Joe Biden struggling with his speech and implied that both Biden, 76, and Pelosi, 79, were too old to hold positions of power in the Democratic Party.

"Both Joe Biden, the 2020 front-runner, and Speaker Pelosi are not just out of step for the American people on key issues, to watch and to observe them, we see that they have lost a step or two or three. Period," Ingraham said.

"They look like they belong in commercials for Visiting Angels. They shouldn't have their hands on any levers of power. Stay away. Yesterday she seemed to struggle with the whole subject-verb-direct-object thing."